The Campaign has now published detailed ‘position papers’ on left-turn-only lanes, advanced stop lines and one-way streets. On 13 July, Dave and I presented all three to the Cycling Liaison Group. Our proposals (summarised below) were received politely by council officers but with little enthusiasm. We heard lots of reasons why our proposals could not be implemented but few suggestions as to how such problems might be overcome. We will therefore now seek political support for our proposals. To start this process we will be sending copies of our position papers to relevant elected councillors. 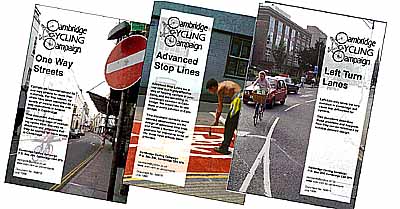 We explained how left-turn-lanes caused real difficulties for cyclists, and made some suggestions about how these problems could be minimised by suitable detailed design. In particular we said that:

We said that advanced stop lines (ASLs) were a low-cost but highly-effective way of helping cyclists at signalled junctions, and that we would like to see them at every such junction in Cambridge. Some of the advanced stop lines in Cambridge were, however, less than ideal. We therefore suggested that the following general principles be adopted:

We also asked the council to experiment with providing eye-level signals for cyclists waiting at the stop line, as was suggested in Newsletter 17. These would be easier for cyclists to see, especially when there was no signal opposite the junction, and could also be used to give cyclists a ‘head start’ before other traffic.

We said that many more one-way streets should be made available for cyclists to use in both directions. We suggested that the council should review each of the one-way streets in Cambridge and convert them for two-way cycling unless there was a good reason for not doing so.