The City Deal will transform Cambridge over the coming years – you can find out how we are responding to it. 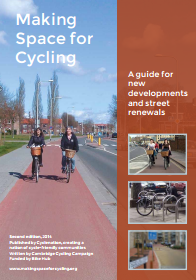 We have created a guide for developers on how to create high-quality cycle infrastructure. Making Space for Cycling (2014) was written by members of Cambridge Cycling Campaign on behalf of Cyclenation (the federation of cycle campaign groups). Providing space for cycling creates efficient and attractive places to live, but infrastructure must be suitable for everyone – people new to cycling as well as those who wish to cycle at speed, and it must avoid failed low quality solutions, such as narrow shared-use paths which mix cycles with pedestrians.

Our vision for the future of Cambridge

We have previously published two documents describing our vision for Cambridge.

We have compiled a list of key guides for developers, from ourselves, from government, and other organisations.

We have a number of position papers which describe our policy on specific issues, some of which relate to planning and development.