Each year, our charity makes a difference to those who work, live and travel in and around Cambridgeshire. Many cycling facilities such as paths, lanes, cycle parks and bridges would not exist without the campaigning of our dedicated team of staff and volunteers.

We continue to work closely with local politicians, businesses and other organisations to represent the views of cyclists, and those who'd like to cycle, and to create a healthy, sustainable and congestion-free region. Read more about what we do, or join Camcycle today and become one of over 1,600 members.

The development of a new town at Waterbeach has opened up the opportunity for improved active travel journeys to Cambridge, but current proposals for an upgraded Mere Way and a new link to the A10 Cambridge Research Park (planning application here) would not provide the safe, accessible, year-round route that is needed.

Together with local groups including Milton Cycling Campaign, we need your help to rescue Waterbeach and surrounding villages from transport isolation.

Please get involved and join our campaign for a safe five-mile link between Cambridge Regional College, Landbeach, Waterbeach New Town and the Cambridge Research Park. 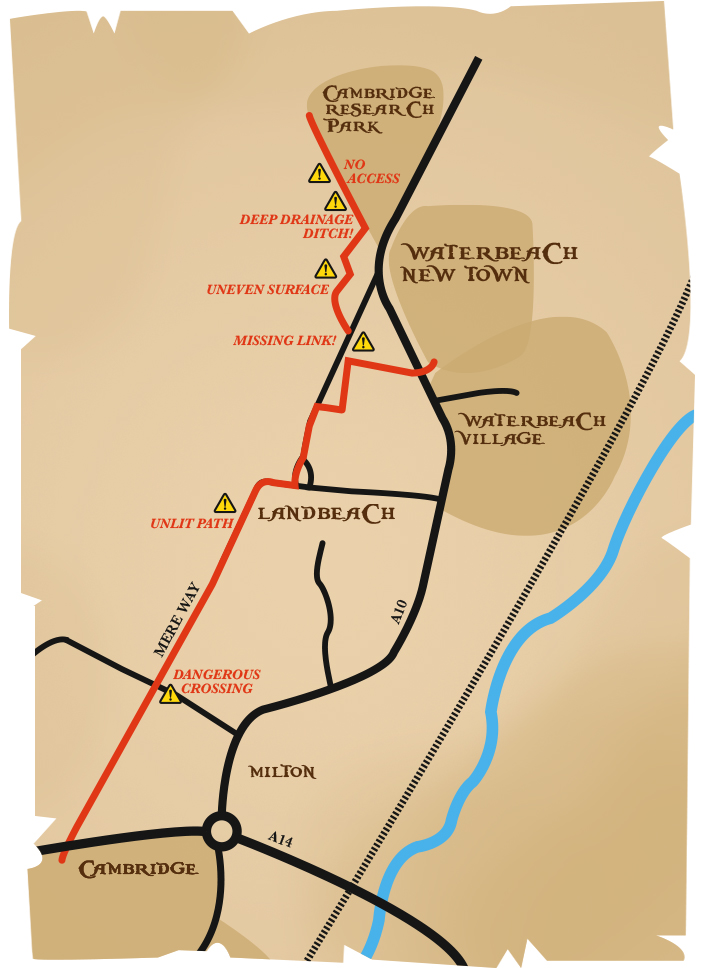 Research shows that perceived lack of safety, including road safety and personal safety, is the single largest barrier to cycling.

Research shows that routes that are not well lit after dark present a major deterrent to cycling, particularly for people who don’t currently ride but would like to start.

Work has already been started on the southern (Mere Way) section of this route by developer Urban and Civic and is expected to start on the northern Cambridge Research Park section later this year. At the moment, despite agreeing to use LTN 1/20 to guide safe cycle route design, Cambridgeshire County Council have presented no objections to the current proposals. A final legal agreement is imminent. We need to make sure this is paused and the design revisited to provide a safe, visible and convenient route for all.

RAISE THIS ISSUE WITH THE COUNTY COUNCIL TODAY
Please write as soon as possible to your local county councillor (find them here) AND members of the Highways & Transport Committee (click to open an email with all addresses included) to call for a safe route to and from Waterbeach and surrounding villages. You may wish to copy in Camcycle too.

If you already use any parts of this route, are put off by current options (including the A10) or would feel unsafe or uncomfortable cycling on any sections of the proposed new link, please add your personal views on these aspects to your comment.

WRITE TO CAMBRIDGE RESEARCH PARK EMPLOYERS
If you work at the Cambridge Research Park we urge you to also contact your employers and ask them to call on developers and the council to build the infrastructure needed to keep their employees safe.

New consultation: have your say on the region’s transport future