We are about to prepare some new ‘position papers’ on left-turn-only-lanes, on one-way streets and on advanced stop lines. Here’s why.

Over the years, Cambridge has replaced several of its roundabouts with traffic lights. Traffic lights are widely acknowledged to see fewer cyclist casualties than roundabouts. However, many sets of lights have left-turn-only lanes on their approaches. Among many examples are

The last two of these provide a particularly interesting contrast. At East Road, the left turn lane is a very definite left movement for motorists, and to get into the lane, they have to cross a cycle lane taking cyclists going straight on, to the stop line. On the other hand, at Huntingdon Road, the cycle lane ends (it says END) just where the left turn lane diverges. There is a central lane further on, but, like most junctions of this type, and unlike on East Road, the cyclist has to move over to the right, often through heavy, impatient traffic.

In some ways, Cherry Hinton Road is worse than this because there is no cycle lane, and the left and straight-on lanes just drift apart. That leaves the cyclist with a difficult choice. Either you move over early where the road is narrower so the manoeuvre is easier to make, or you leave it until nearer the junction where there is less ground to cover in the more exposed position in the middle of the road. 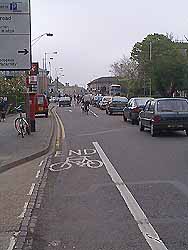 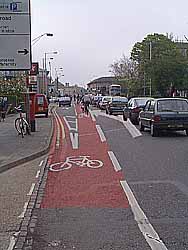 We spent one rush-hour a couple of weeks ago watching at Murkett’s Corner. Though the problem has been there since the lane was painted in 1980 or so, left-turning traffic has increased recently with the restrictions on cars in Bridge Street. A caller at our stall prompted us to follow this up.

As a result we wrote to the County Council suggesting a similar arrangement to that at East Road, which we regard as a model of its type. This would be cheap to do, and in any case this junction is being reviewed at the moment to consider pedestrian movements. It is to be hoped that traffic in Victoria Road can be addressed too; nevertheless the left-turn-only lane will continue to be a problem for cyclists.

The problem is City-wide, however, so we also have an appointment with the Cycling Liaison Group to discuss this at its July meeting. We will prepare a position paper for that meeting. If you would like to help in that process, please get in touch.

We will also be considering two other topics at that meeting, and will be preparing position papers on these topics as well. One of these is one-way streets. Many streets in Cambridge that have no-entry signs are not, in fact, one-way. Only just the short section past the sign is one-way, and an island allows cyclists to be formally not included in that restriction. This is an excellent way of adding to cyclists’ convenience. While too narrow for cars in both directions, cyclists can easily fit.

There are still quite a few streets that are unnecessarily one-way to all traffic, however. Three example spring particularly to mind:

The islands required to allow two-way cycling, while not exorbitantly expensive, do cost scarce money. More significantly, perhaps, they also require space that isn’t always available. St Andrews Street has demonstrated that it is possible to have two-way working in a more informally regulated environment. But perhaps a better example was once at Tennis Court Road, off Lensfield Road, now removed, where the access was made with an island, but painted on the road instead of solid construction.

This seems to be a good compromise between the Dutch style ‘except cyclists’ exemptions to one way streets, but with no protection at the ends, and the very formal, expensive and space-limited concrete islands we have mostly in Cambridge today. Our aim is to get more of the one-way streets in Cambridge modified so that the one-way restriction applies to motor vehicles only.

The third paper will be on Advanced Stop Lines, which were discussed a little in Newsletter 17. Here we will discuss the arrangement of lights, and also the need for approach lanes.