An Advanced Stop Line uses the now-familiar cycle symbol painted in a box on the road at traffic lights. ASLs are a good idea, and I am not knocking them. It does seem to me that they are often a compromise, but I know it took a lot of unenviable hard work by the country’s highway engineers and planners to reach that compromise. All highway users need a degree of order, safety, and an indication of respect from authority. Cyclists still face certain difficulties in today’s junction designs.

Getting to the ASL. Because of space limitations, the ASL feed lanes are sometimes omitted. Often ‘gutter riding’ proves hazardous or impossible, and if she needs to turn right, the cyclist has a gauntlet to run. It can be unpleasant and dangerous if the traffic starts to move off before the cyclist reaches the ASL. Regular users of a junction memorise the signal timings, so as to avoid being caught in this moving traffic. 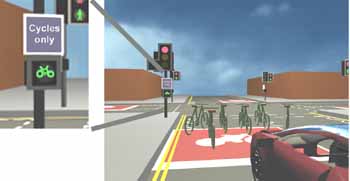 Moving off with the lorries. The moment the lights turn green, all traffic moves off. For vulnerable road users to be placed in the centre of this busy scenario is asking too much, especially of those carrying children. Even cyclists going straight ahead are often ‘cut up’ by left-turning motor vehicles.

Pedestrians. Sometimes cycle lanes are used as footpath extensions and ASLs as pedestrian crossing areas. Pedestrians often do not see cyclists at all, or do not see them as part of the traffic – they switch off their traffic sense and step out into cycle lanes without looking.

Traffic light junctions are well-designed for motorists and pedestrians. At most junctions cyclists are supposed to be controlled by the same set of lights and time sequence as used by motorists. In my opinion this is a mistake. It signals to all highway users that cyclists should keep up with the cars, and the clear hazards and difficulty of doing so help to drive some cyclists illegally onto the pavements.

A bad idea? Just because one version of cycle traffic lights has problems in the UK, it should not lead to the scrapping of the concept. Other countries, including France and Germany, have found their twin traffic light designs quite successful. Here the ‘problem’ with a second set of lights is that the Department of the Environment, Transport and the Regions does not want to encourage anyone to go past a red light. I am very concerned with the apparent lack of flexibility to update the national regulations in this area. The adherence to the letter of the law here is making it more dangerous for cyclists to use these junctions.

The concept. On the conventional traffic light pole, usually level with the advanced stop line, add another set of traffic lights, about the size and height of the pedestrian crossing ‘push and wait’ box. Each lens shows the cycle symbol red (or green). A sign Cycles Only would indicate to both cyclists and motorists whose lights these are. The cycle green phase should start a few seconds before the motor vehicles’ green light appears. This would allow cyclists to clear the junction without having to dodge motorists. In addition, the delay would help approaching cyclists know whether they have enough time to get to the ASL before the motor traffic starts to move.

I do not believe that the cost of these lights will be greater than that of a feeder cycle lane, taking into account the disruption involved in adding one, and the lane’s reduction in motor traffic space. Any improvement in safety would be of great economic benefit, too.

This concept reinforces for everyone his role in transport. It brings cyclists safely back into the traffic control system, and other road users are shown that the highway system respects the cyclist’s needs. It could be an important learning tool for highway users of the ’90s, and I believe this argument alone is enough to merit its serious consideration.