May in Cambridge is a Month of Cycling, in which we are running various events and launching several major projects.

‘Creating a Cycling Culture: How do we respond to the challenges of the future?’

A national conference will be held on Saturday May 10th in Cambridge.

Philip Darnton, who is in charge of the government’s cycling body, Cycling England, will be a keynote speaker. Other speakers include David Howarth (Cambridge’s MP), Matt Seaton (best known for his writing in the Guardian), Martin Lucas-Smith (Co-ordinator of Cambridge Cycling Campaign) and Koy Thomson, Chief Executive of London Cycling Campaign. 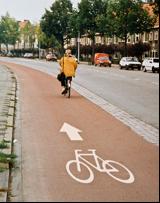 Additionally, a number of workshops will be running, including a session on online cycle mapping which is hoped to include the launch of a national journey planner. Furthermore, a number of leisurely rides are also planned as a lighter side to complement the presentations.

The conference is being organised by Cambridge Cycling Campaign, and is set to attract hundreds of people from around the country. The venue is the stunning Centre for Mathematical Sciences, in West Cambridge.

Full details of the national conference, including a booking form, are online at: www.camcycle.org.uk .

Printed in full colour, some 2,500 copies are being distributed in May.

All Councillors will receive a copy, as will a wide range of other decision-makers, influential people in Cambridge, media contacts, conference delegates, national figures, developers of the new housing settlements being planned for Cambridge, our members, and others.

Cycling 2020 will be formally launched at the national conference and a range of promotional activities are planned.

Cambridge is often known as a cycling city. Its vibrant cycling culture, with probably the highest rate of cycling in the country, is an asset to a city which would otherwise be even further choked with traffic. Yet we are a long way from the sort of standards used in Holland.

Through Cycling 2020, we will invite readers to share the vision of a world-class cycling city that we set out in the brochure. 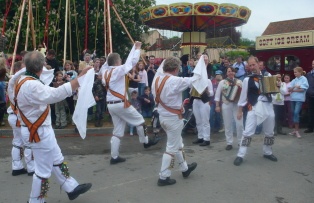 On Bank Holiday Monday 5th May 2008, we will be running big bike rides from Cambridge into the fenland countryside.

There’s a short ride to the village of Reach, stopping for the village fair, or a longer ride through Wicken Fen to Ely. Both rides start together in Cambridge and will go at a leisurely pace following National Cycle Network Route 11.

This is a ride just for fun, there is no charge and there is no sponsorship. Both rides start and finish in Cambridge. 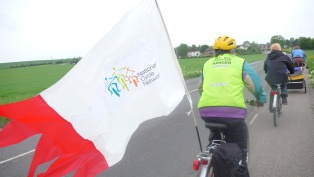 They are open to everyone, and everyone is welcome to bring their roadworthy bike. This includes accompanied confident child cyclists who are strong enough to ride for around 10 miles each way, which is shorter than it sounds!

The ride is run in association with Sustrans and Cambridge City Council. We thank them for their assistance.

A colour leaflet and map about the ride are available on our website at http://www.camcycle.org.uk/events/rides/ . A fun day will be had by all!

A delegation of local cyclists will travel in mid-May on fact-finding tours to Assen, Holland to see how cycling and walking is catered for in that country.

Holland sees extremely high levels of cycling – 40% of journeys are by bike in some areas. (By comparison, Cambridge has 25% of commuter journeys by bike.)

With the large number of new developments being planned for Cambridge, ensuring that a high quality environment that facilitates cycling and walking is created is essential if the city is to avoid gridlock. 47,500 new dwellings – equating to 125,000 new citizens, represents an enormous challenge for transport, and Holland provides a good example of how the right mindset from Local Government and developers results in people getting on their bikes. 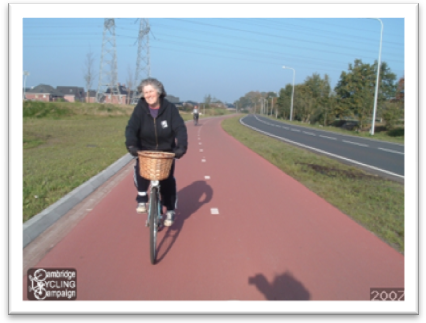 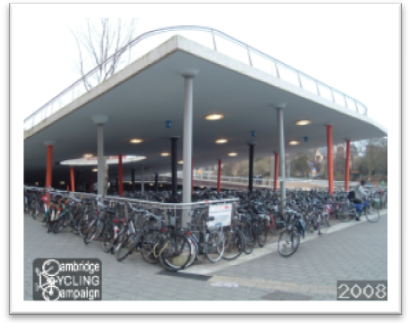 A few places are still remaining on the tours, which run from 13th – 15th May 2008 and 20th – 22nd May 2008. Led by an experienced guide, we will tour around Assen, and be shown how the Dutch give real priority, rather than purely lip-service, to sustainable transport. Each day will also include time to relax and enjoy what is a beautiful area.

May, the Month of Cycling, will also see the launch and distribution of our new guide for developers and decision-makers, entitled ‘Cycling in New Developments‘. Drawing on best-practice from around the UK, it sets out our aspirations for the new developments being planned for the Cambridge sub-region. It offers developers and planners positive guidance on achieving high levels of cycling in the new developments.

The guide is attractive, readable, and easy to flick through.

The new developments around Cambridge are effectively a blank sheet of paper. None of the usual excuses for cycle lanes that stop when you most need them, or lack of cycle parking, etc., apply.

Ignoring the need for high levels of cycling will result in 50+ years of car-dominated travel patterns in a world of rising oil prices, climate change, and the need to tackle the obesity epidemic. Cycling is an ideal solution to all of these and a worthwhile method of transport in its own right.

Cycling in New Developments aims to give Councillors, officials, and developers the information they need to ensure that cycling will be the natural option in these new areas.

The guide is already on our website, and hundreds of copies are being printed for distribution.

Local elections – use your vote for cycling: 1st May

Also in May, cycling goes to the polls!

Local election voting will take place on May 1st. The Councillors that are elected are the people that will be making the decisions on planning and transport issues.

We have created an elections website, at www.camcycle.org.uk/elections where all the candidates have been invited to tell the public what they think on a range of cycling and walking issues.

Already, an interesting and varied range of responses have been submitted. We hope that this initiative, culminating with the May 1st elections, will raise awareness and aspirations.

(Note: Cambridge Cycling Campaign is a non-partisan body and does not endorse any particular candidate or party.)

Congestion charge consultation results: how would it improve cycling?

On 6th May, the County Council will announce the results of its consultation on its congestion charge proposals.

We will be launching a series of information leaflets in May to help explain many key issues that sadly have not been adequately understood during the consultation phase over the last 6 months.

Cambridge Cycling Campaign has welcomed the proposals, as they provide a real opportunity to improve cycling and walking (as well as public transport) in the area, because of the likelihood of almost half a billion pounds of free, up-front money from the government in advance of any scheme going ahead.

With over 47,500 new houses being built by 2016 around Cambridge, the prospects for gridlock are all too real. The proposals offer both a huge carrot, and a stick, approach to solving this potential problem, one for which no other realistic solutions have come forward.

We will be keen to hear what the public – not just the most vociferous opponents but the many people who we believe support the scheme – say.

Many people remain completely unaware of the positives: an enormous package of up-front investment some ten times the level of current transport spending is proposed.

Whilst a congestion charge would certainly have some losers, we believe that in the medium term, the majority of people, and the health of Cambridge as a city would both benefit greatly.

Friday Rides: every Friday in May 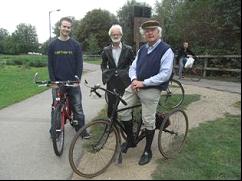 Every Friday will see our informal Friday Rides. Come and join us for a pleasant and very informal lunchtime ride.

It’s a lunchtime ride of varying speed and length, usually involving a stop at a pub on the way. Open and to all who like to ride and talk about bicycles. Join the ride at your own risk.

The Friday Rides will run each Friday lunchtime at 12:30pm, leaving from the Stourbridge Common side of Green Dragon Bridge.