The County Council have started their consultation on this, and have also issued a 183-page document – the formal bid to the Government – giving details of the scheme, including analysis of the underlying figures.

Full details can be found online at: www.cambridgeshire.gov.uk/congestion/ and the County have been running a series of roadshows, as published in the last Newsletter. 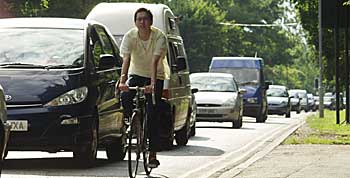 The December monthly meeting was the third at which members discussed this issue, to determine our policy on this important and huge set of proposals.

The key facts about the scheme and its context are listed below.

Key facts from the County Council

Areas on which we need reassurance:

Following from those points, there is a range of areas we are going to be seeking reassurance on from senior County Council officials:

The Campaign broadly welcomes the proposals but will be seeking reassurance on a number of points.

We also thought that if some innovative way were found to increase levels of enforcement of various kinds, that could prove a highly effective way of improving traffic flows and dealing with danger on the roads resulting from illegal or aggressive motorist behaviour.

If the scheme goes ahead, a series of ‘quick wins’ would help build the confidence of our members and the general public that the cycling aspects are being taken care of. In particular, we would like to see early work on:

The issue of congestion charging has been continuously in the local press for the last few months. Sadly, little of this discussion has touched on the proposed enormous package of physical infrastructure measures, instead focussing almost solely on the congestion charge side. We think the press needs to cover much more of the infrastructure side, and the County Council needs to give them more information to enable them to do so. With that information, people across Cambridge might be more welcoming.

The County Council’s advocacy of the scheme has not been helped by the change in political leadership. Shona Johnstone, so far one of the most vocal supporters of the proposals, stood down from her post late in 2007 as a result of another political issue. Nonetheless, the County has continued to press on with consultation.

Many City Councillors have expressed concerns about the way the County has involved them in the development of the proposals, and it is clear that the County needs to work to get the City Council more on side if the proposals are to be accepted. Additionally, we think it is important that every Councillor takes the time to read the County’s documentation before making comments.

At the City Council’s Environment Scrutiny meeting on 8th January 2008, Councillors voted to:

“support the development of a comprehensive transport strategy that includes substantial improvements to public transport, cycling and walking and some form of demand management, probably road pricing”

but with a series of caveats on points they felt the City Council must see addressed by the County Council. These points can broadly be summarised as: