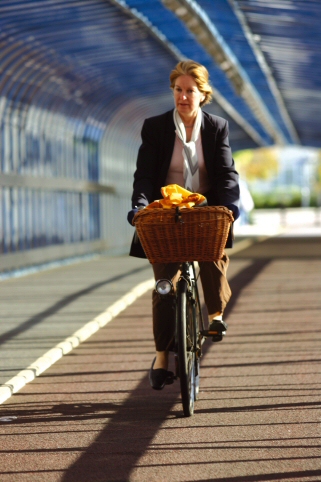 Cycling… …is just as much a legitimate form of transport as cars, buses, and motorbikes. Cyclists are just as much road users as those behind the wheel.

As such, the needs of cyclists are as important as the needs of motorists and should be given increased status when traffic schemes are being designed.

This means, for example, that anything which seems silly to a motorist is likely to seem silly to a cyclist and anything which holds up a cyclist or makes their life difficult should be considered as seriously as if a motorist were being disadvantaged. Yet, as we demonstrate later, this is often not the case. Obstructions, lack of continuity and so on are the norm and do nothing to encourage more people to get on their bikes.

The benefits of cycling

Cycling has so many benefits, from being an efficient use of space to helping combat climate change. Not to mention the fact that people who cycle regularly have an average fitness of someone 10 years younger

The benefits of cycling are numerous.

It’s a cheap and reliable way of providing mobility for thousands of people and money spent on providing better cycling conditions has a beneficial effect on all transport users. Top-quality cycle routes can be built for a fraction of the price of many road schemes.

Cycling makes efficient use of space, which is at a premium in Cambridge. Road capacity is increased perhaps tenfold if bikes are used instead of cars and some ten cycles can be parked in one car space.

Cycling is good for the environment. With the increasing concern over climate change, energy conservation is now a priority in most countries and it’s worth noting that a cyclist can travel about 500km on the energy equivalent of a litre of petrol. Furthermore the fuel a cyclist uses – food – can be locally grown and cycles use very little fossil fuel – just a little oil from time to time! Of course, food production does involve fossil fuels, as does manufacturing cycles, but less than in manufacturing motor vehicles. A cyclist also produces far fewer carbon emissions, is almost noiseless and produces no pollution.

Cycling is good for the body. Regular cycling reduces body weight, tension and the risk of heart disease. The average cyclist lives longer than the average non-cyclist. It also makes people more efficient at work. People who cycle regularly have an average fitness level of someone 10 years younger.

Cycling is a faster means of transport, particularly in Cambridge. The vast majority of urban journeys can be made faster by bike than any other way. 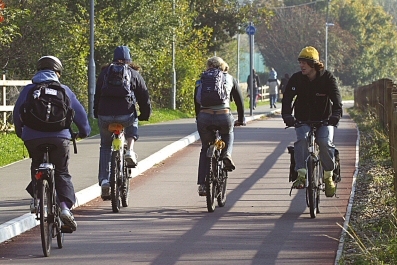 If encouraged and promoted effectively, cycling can offer fast relief from congestion, particularly in Cambridge’s often narrow and traffic-clogged streets.

People assume that the difference in traffic in school holidays is about a third. But in fact, the volume of cars is only 10% less. So moving even that small volume to cycling would help enormously

Studies have shown that during half-term and school holidays, almost all the traffic queues in Cambridge disappear. This is despite the fact that the volume of traffic only drops by 10%. So removing 10% of the traffic would mean all forms of transport would flow much more freely. Yet, almost 50,000 new dwellings are planned around Cambridge in the coming decade, so we have to go further than 10%.

Ironically for a cycling campaign, we have long promoted the computer modelling of a no-cycling day, to demonstrate the huge contribution cycling makes to keeping traffic levels down

Conventional wisdom says that building more roads and better junctions will help to ease traffic flows. However, research shows that the same effect can be achieved for less money by investing in other forms of transport, such as cycling. This is because good alternatives tempt sufficient people out of their cars to obtain the 10%+ reduction.

As a result, contrary to popular belief, more cyclists on the road actually make drivers’ journeys faster because there are fewer cars. Ironically for a cycling campaign, we have long promoted the computer modelling of a no-cycling day, when the large number of cyclists who normally leave their car at home drive instead, to make people realise the huge contribution cycling makes to keeping traffic levels down.

The Campaign believes that a heightened investment in first-rate, continental-standard conditions for cyclists would have a huge impact on traffic volumes in Cambridge, as well as reducing levels of pollution and environmental damage. 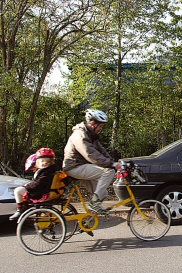 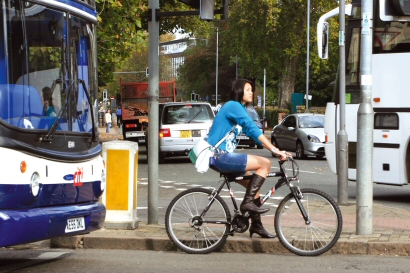