I am pleased to endorse Cycling 2020.

I’m delighted to see that Cambridge residents are so committed to promoting a cycling culture and to protecting the environment in Cambridge. In a city where one in four residents cycles to work, we need to provide top-notch facilities for cyclists. 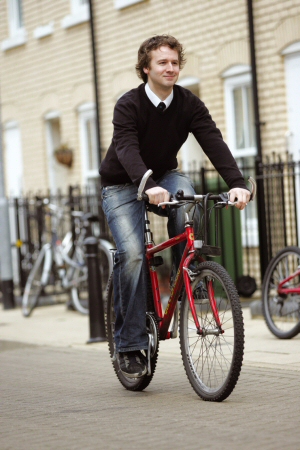 Cambridge is often known as a cycling city. Its vibrant cycling culture, with probably the highest rate of cycling in the country, is an asset to a city which would otherwise be even further choked with traffic.

Yet this cycling culture exists in spite of, rather than because of, many of the efforts of the City and County Councils to provide for cycling. What efforts do exist are often hampered by a road-safety culture that seeks to insulate, rather than a culture which seeks to achieve safety and freedom by thinking in terms of convenience.

Too often, mediocrity prevails, with a style of thinking that seeks to squeeze cyclists in where possible, rather than provide genuine priority in a way which will entice more people to cycle, more often.

Evidence from abroad shows that providing for cycling in a genuinely pro-active and positive manner is possible. Whilst investment levels in sustainable transport have historically been higher in areas such as the Netherlands and parts of Germany, what is really present there is a political willingness to give cycling the priority it deserves: a willingness to ensure that cyclists are able to travel on safe roads, without the sort of barriers and traffic levels which pervade our own city. A willingness to promote cycling for what it is: a healthy, sustainable, and congestion-busting form of transport that it is in everyone’s interests to see more of.

Some road users will complain that cyclists don’t pay their way. On the contrary – cyclists pay the relatively tiny sum spent on them through general and local taxation. Yet the real financial value of cycling is that of time savings for motorists: every cyclist is potentially one fewer car in a traffic jam. Every cyclist reduces the pollution levels which are damaging to the city’s health. In summary, every cyclist increases the ability of the city to function, economically and socially.

As tens of thousands more people flood in to our prosperous region and as homes are built to accommodate them, the need to ensure that Cambridge’s cycling culture is maintained and extended could not be greater.

We invite you to share our vision for a world-class cycling city. A city which genuinely values cycling and the contribution it makes. A city which wants to see even higher levels of cycling, where cycling becomes a real alternative that even children and the infirm could safely use without the sort of dangers, or perceived dangers, that sometimes exist.

All the solutions we outline seek to address the source of the problem: too much traffic on the road going too fast, with too large an impact on the life of the city.

We profile in this brochure some of the policy areas which desperately need to be addressed and for which better alternatives do exist elsewhere. We set out some major schemes, including our proposed flagship route, the Chisholm Trail, which would revolutionise many journeys surrounding the north/south railway spine of the city.

Much of what is possible merely needs the political will to implement. We hope we will inspire you, through this brochure, to share our vision and to let us know your thoughts.