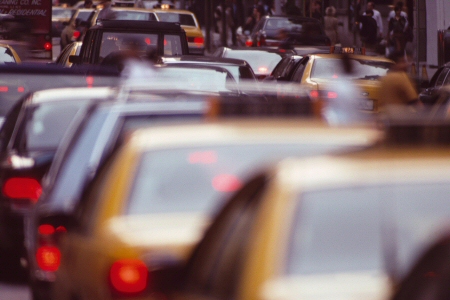 Traffic… … is the single greatest danger to the cyclist, both in terms of its volume and speed. Cambridge is already heavily congested and many of its roads are not designed for such heavy car usage.

But it’s not just cyclists who have to stomach the effects of heavy traffic. All road users, pedestrians, the environment and our city as a whole suffer when traffic is not curtailed.

As a result, reducing traffic levels is probably the biggest challenge facing transport planners, but it must be achieved if we are to encourage greater cycle use.

Traffic planners and decision-makers often fall into the trap of assuming that the only way to make cycling safer is through specific provision for cyclists. But this could never be achieved city-wide even if it were desirable. We should be aiming to make the whole road network safer because this is what cyclists most depend on. Even with the expected increase in cycle facilities cyclists will, realistically, have to rely on the road network for large parts of their journeys.

Making the road network itself safer, especially by providing more space on the roads and designing for slower speeds, is a key way to encourage cycling

For this reason we need to address dangers on the road such as speed, volume of traffic and points where cars may cause an increased hazard. There is less need to create off-road cycle routes if we can make the road itself safer for cyclists.

Traffic calming measures need to be put in place with care and attention and designed with cyclists firmly in mind.

The Campaign believes there are a number of possible solutions.

Traffic reduction is difficult, but it has been achieved in recent years through the use of rising bollards in the central area and is also being tackled with the promotion of Park and Ride. This approach needs to be continued if we are to see a growth in cycle usage.

One other way of reducing traffic is through a congestion charging scheme of some kind. The Congestion Charge in London resulted in a considerable reduction in traffic in the capital and a significant reduction in delays. A congestion charge offers the potential for solving many problems in one go, in particular by freeing up roadspace for cycling and walking, creating a virtuous circle. 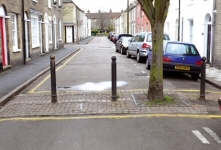 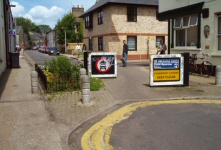 Smaller-scale measures are also well-worth considering and can be extremely effective. Two good examples of the kind of intelligent measures which improve life for cyclists are in Petersfield. One is on Gwydir Street next to the Alexandra Arms, and another at the junction of Sturton Street and Kingston Street, where entrances to the road have been closed to motorised traffic but are open to cyclists and walkers. This means the neighbourhood is a no-go area for rat runners but gives cyclists a safe, uncongested route across the city.

The avoidance of dangerous traffic-calming measures 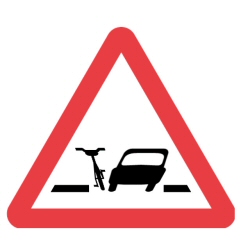 We support the principle of traffic being calm – this means lower speeds, safer crossing points and fewer rat runs. However, there have been concerns in the past that some traffic calming measures have had the effect of putting cyclists at greater danger.

Traffic calming is important but must be designed in a way that avoids creating more casualties. Pinch points, like those on King’s Hedges Road, have caused all sorts of problems and a collapse in the levels of cycling

Road narrowing is sometimes used as a way of reducing traffic speeds and one way of making roads narrower is to create a cycle path. Street planners need to make sure that cycle lanes – and cyclists – are not used as traffic calming measures.

Cycle-unfriendly traffic calming can also encourage bad behaviour. Where there are pinch points in the road which make it difficult for cars to overtake cyclists – for example where there are narrow traffic islands – drivers often react by speeding past the cyclist before the pinch point and cutting in front of them. As a result, measures designed to slow down two-tonne vehicles travelling at 30/40 mph often end up being injurious to 70 kg vehicles travelling at 12 mph. 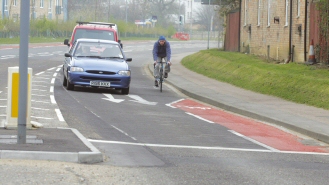 King’s Hedges Road is the most recent example. We must see the changes undone that were made in 2006 with the Arbury Park development. Instead, good quality, hybrid cycle lanes could be created on the road, so that well before 2020 the area could become a cycling mecca.

Another example of problematic traffic calming is the A10 through Harston. This work was completed in 1999 and comprises 16 central islands along a mile-long stretch of road. Traffic speeds are reduced as a result but cycling is now much more dangerous and unpleasant because impatient drivers overtake at the very last possible moment before a traffic island. The pavement is poor quality, but cyclists have been forced onto it and now face cars emerging from driveways and a bumpy surface that makes journeys slow.

Another important measure is the addition of gaps at the side of road humps. Humps should be there to slow cars down, not cyclists.

Excessive speed is the Number One factor dissuading people from cycling and walking. Simple and understandable area-wide 20mph and 30mph limits are needed by 2020

In general, we believe that residential areas should be subject to 20 mph speed limits. 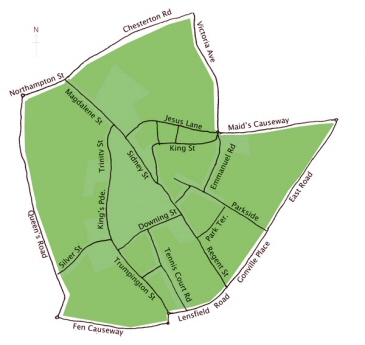 Excessive traffic speed is the number one factor in dissuading people from using bikes, hardly surprising when you consider that in a collision between a cyclist and a car travelling at between 30 and 40 mph the chances of death or serious injury are extremely high. A 20 mph speed limit could mean the difference between life and death, as well as improving the pleasantness of streets and providing scope for them being used more for recreation. 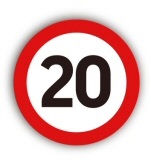 The Campaign is pushing for area-wide speed limits. These would be appropriate in places such as the city centre, built-up residential areas like Petersfield and new developments such as Arbury Park.

And it’s important that the limits are area-wide to iron out inconsistencies. Speed limits that change from 20 mph to 30 mph and back again on a street by street basis are very confusing for drivers and result in excessive signage.

Traffic calming and reduction is essential if we are to encourage cycle usage in the future. Speed limits and traffic calming measures need to be designed properly in a way which creates a safer and more convenient cycle network. Wide cycle lanes are one way to make space on the roads for cyclists whilst at the same time reducing speeds.