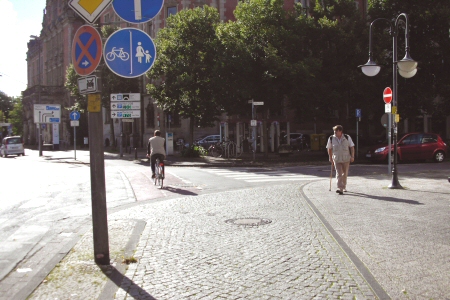 Just like drivers,… …cyclists are real road users and should be treated as such. Unfortunately, when it comes to crossings in Cambridge, this does not always apply. Not all are of high standard or suited to the high levels of bike usage.

Making crossings easier to use will make cycling easier and more free-flowing, and reduce conflict with pedestrians

Equal treatment for cyclists at junctions

Every cycle crossing in Cambridge should be wide, detect cyclists, and give plenty of crossing time

The Lyndewode Rd junction in Cambridge is an excellent example of a cycle route facility that has been designed to the same principles as a normal traffic junction. There are no buttons to push and cyclists flow freely.

Cyclists approaching a junction require the same warnings and notifications as a motorist would. This means being able to see clearly as they approach whether they can cross the junction or whether they need to stop, so that they can adjust their speed accordingly.

Traffic lights for cars are positioned so that drivers can look straight ahead in the direction they are going and the same should be true for cyclists. 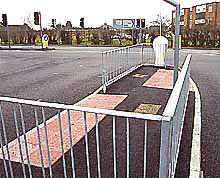 Equally, it is inappropriate to ‘box in’ cyclists or make them undertake a crossing in two stages. ‘Cages’ such as the ones on King’s Hedges Road by Arbury Park make life difficult for pedestrians and cyclists alike and almost impossible if the bike has a trailer attached.

We believe the ban on cyclists turning at parallel crossings like Gonville Place is inappropriate. Turning is considered to be acceptable at toucan crossings so we see no logical reason why the same should not be so at parallel crossings. A trial removal would confirm that this outdated regulation could be scrapped.

Crossings in the Netherlands and Belgium are much more cycle-sympathetic and there’s no reason why we shouldn’t replicate their approach here. 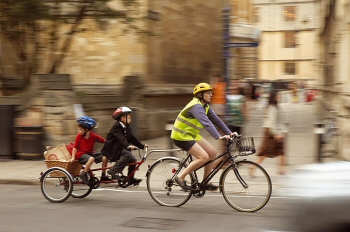 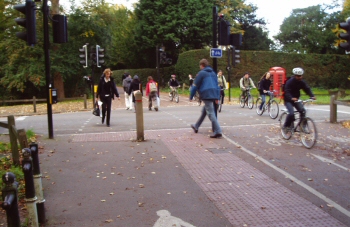 When the crossing on Queen’s Road was upgraded, it resulted in an excellent facility which segregates cyclists and pedestrians, offers a wide unencumbered crossing area and detects cyclists automatically without the frustrating need to stop, press a button and wait. 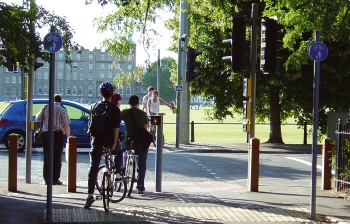 By contrast, when the Gonville Place crossing was replaced in 2006, there were many complaints. The new crossing did not segregate pedestrians from cyclists, there was no automatic detection of cyclists, there was no visual indicator on one side of the road and the sheer number of posts put in place was hazardous and unnecessary. This was a clear case of an off-the-shelf Department for Transport design which did not fit the area. Pressure from the Campaign resulted in these design faults having to be corrected, at public expense.

With joined-up thinking, it should be possible to create crossings in Cambridge that use up-to-date technology and the best design for the area, to facilitate the smooth flow of cyclists and walkers.

The lesson here is clear: crossings must be designed to facilitate high levels of cycle usage.

Detector loops – entirely common at road junctions – should also be the norm at cycle crossings in the city, to help making cycling more effortless

Detector loops should be the norm at cycle crossings in the city. They should be used in the same way that they are used on the road, except where there is a risk that they will be frequently triggered by accident.

If the system detects cyclists on approach and changes the lights accordingly instead of requiring cyclists to stop and press a button then there will be less delay to the rider, cycling will become more convenient and this will have the knock-on effect of encouraging cycle use. Minimising waiting times will also deter cyclists from jumping the lights. 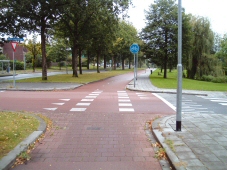