I rode from Arbury Road to the Histon Junction and back, looking at the works as I went: 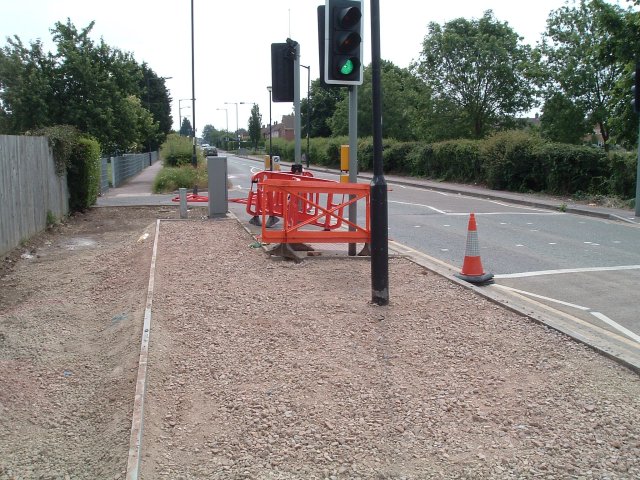 This is the new path on the east side of Arbury Road looking south. Note that it gets only as far as the entrance to St Laurence’s School. Then there is a right angle bend for cyclists, even though there is nowhere for them to go if they cross the road, and a narrow footpath which isn’t accessible in a convenient way due to the crossing controller box being in the way.

Surely it would have been best to have moved the controller. Otherwise, why not take the path behind the controller ? This shared use path really shouldn’t stop at this point because at the other end of the front of St. Laurence’s a path starts which could take cyclists all the way to the shops at Arbury Court or to Kings Hedges Primary School. 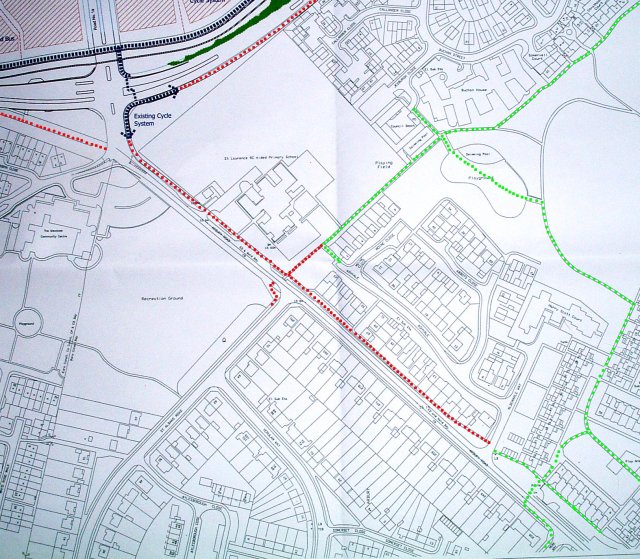 I modified this part of the plan to show existing shared use paths in green and ones which are required to make them link up with the new development’s paths in red. You can see that the developers are putting in some of the required links, but not all. Without the paths providing a continuous and pleasant path to some place, it is difficult to see what they are for. The new development will largely be cut off from the rest of the city by the newly redesigned King’s Hedges Road, as none of the proposed cycle or pedestrian exits require fewer than three toucan crossings to be used to cross the road, and there will not be enough of these crossings, particularly to the eastern end of the site.

They are also not building all of the paths originally shown on the plan in blue. The path running left to right at the top left corner of the plan is not being built until the guided bus is built. 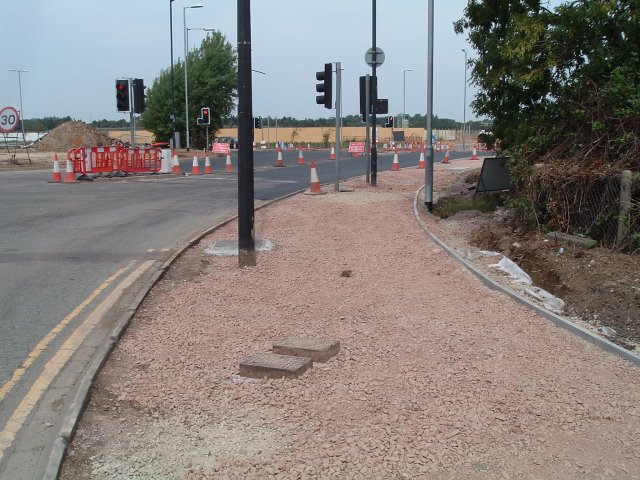 Looking in the opposite direction, north along Arbury Road we see this forest of posts. There is no dropped kerb to allow cyclists on the path to access the Meadows estate, to the left from this photo. There also isn’t anywhere for cyclists on the road to be able to join this path should they want to. Also note the metalwork in the path. It appears that a decision has been taken to put all the metalwork in the shared use path rather than on the road. This is dangerous because such metalwork, especially when wet, presents a much greater danger to those on two wheels than those on four. This is heightened when radii are smaller as they are on a path like this which takes the inside of the bend. Note that there is very little room for tarmac on top of the loose mixture. This surface may start off flat, but it soon will no longer be flat.

Given that this path doesn’t allow access to or from the road, it need not have been built so close to it. To the right on this photo, especially a few metres further on, there is a considerable area of unused land which would have been pleasant for cyclists who could be further from the traffic for a while. 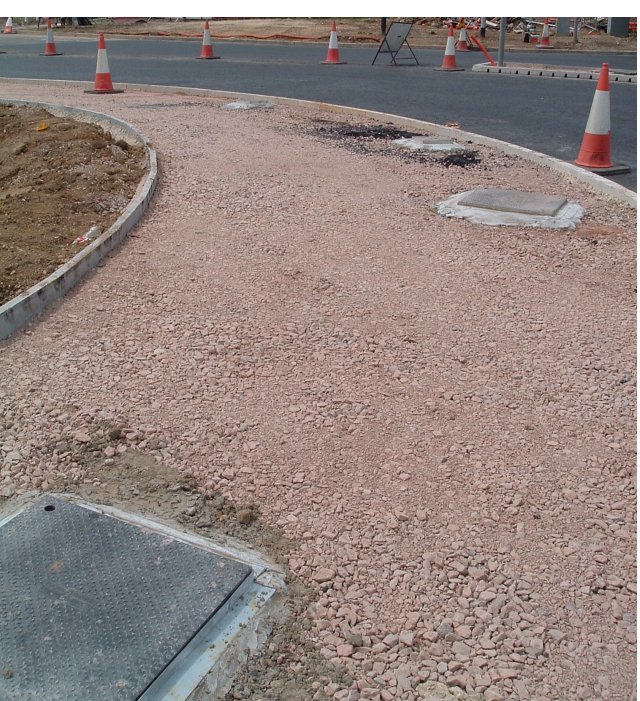 View in the opposite direction from the Arbury Road / Kings Hedges Road junction. Note the number of pieces of metalwork in the path. Whatever line you take around this corner you will inevitably run over at least one of these, which may well be slippery in the wet. 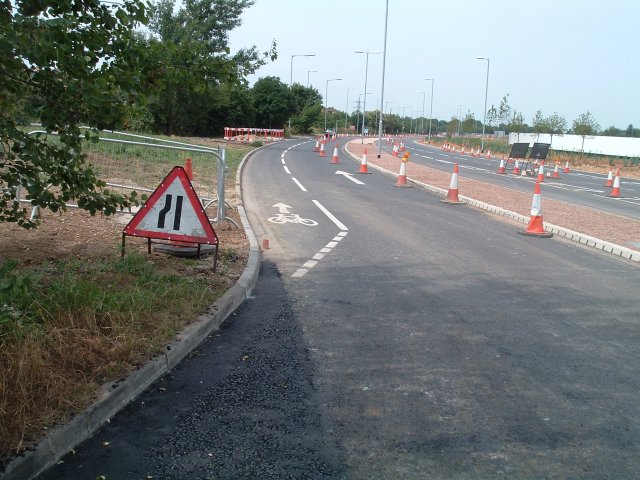 This is shot from the Arbury Road / Kings Hedges Road junction looking west. One piece of reasonably good news. The cycle lane is taking up a part of the very wide lane here. However, this isn’t really good enough. Why not a mandatory cycle lane ? Given the enormous width, why not a cycle lane wider than the minimum of 1.5 m ? Also, it doesn’t go very far… 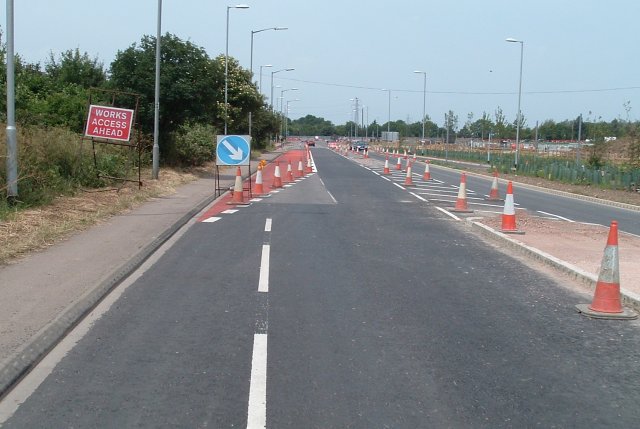 After a few metres, the cycle lane merges into a bus lane. This shows how wide the cycle lane could have been for its entire length. For a bus lane shared with cyclists this is none too wide. Buses and taxis will have to stay behind cyclists due to not being able to overtake safely. Or, quite possibly they will force their way past putting cyclists into danger. 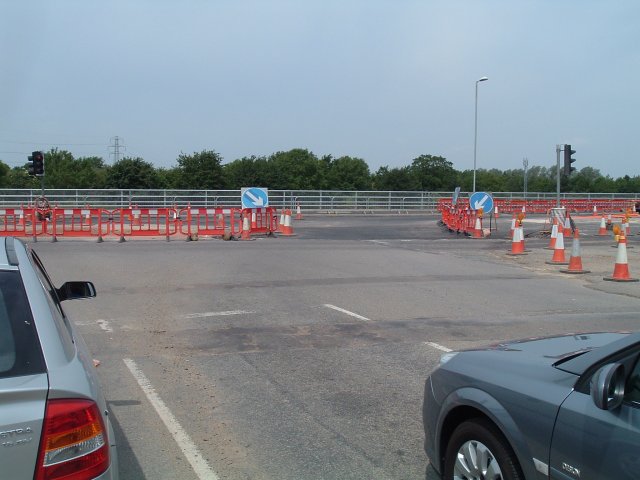 At the end of Kings Hedges Road, it appears that right turning cyclists are expected to ride between the blue signs with motorists. Because this road is now twice as wide and with a larger radius than before, those motorists are likely to be travelling faster. Due to cyclists having to go further to the right to avoid the island being built, the motor vehicles are also likely to pass closer. 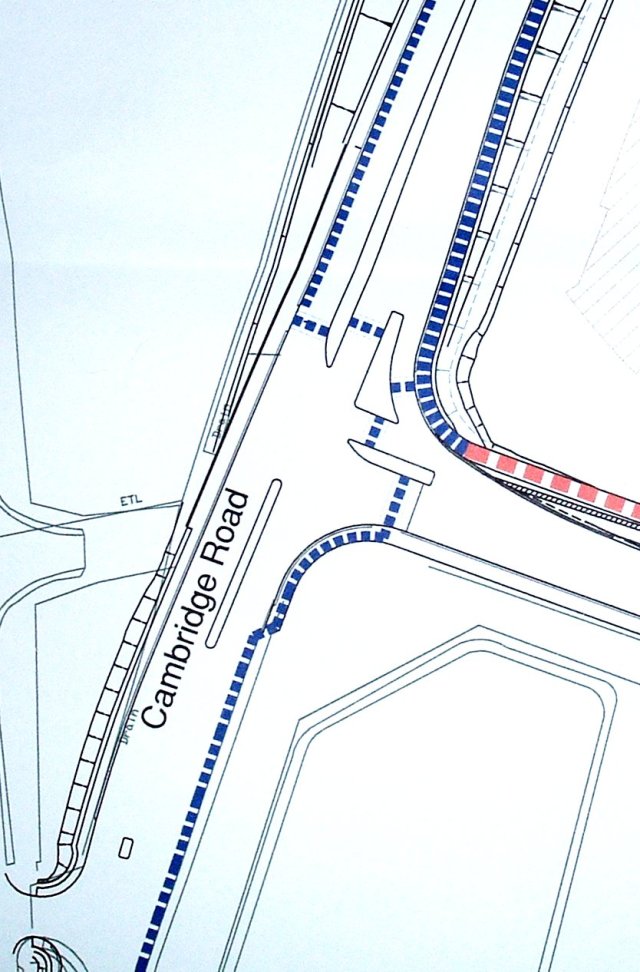 All plans I’ve seen appear to expect cyclists to dismount at this point and use four toucan crossings to cross the road. This is taken from August 2004 plans, produced after criticism from the Safety Audit of January 2004, but apparently not taking that criticism into account. 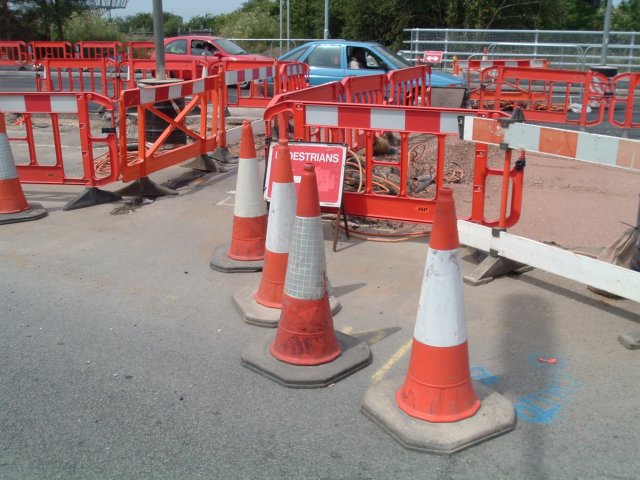 If you turn left at the end of Kings Hedges Road in order to use the temporary crossing you find yourself heading for this nasty tight gap between cones.

And then this damaged ramp. Don’t try to ride on the left half of it, as you’ll surely come off your bike. 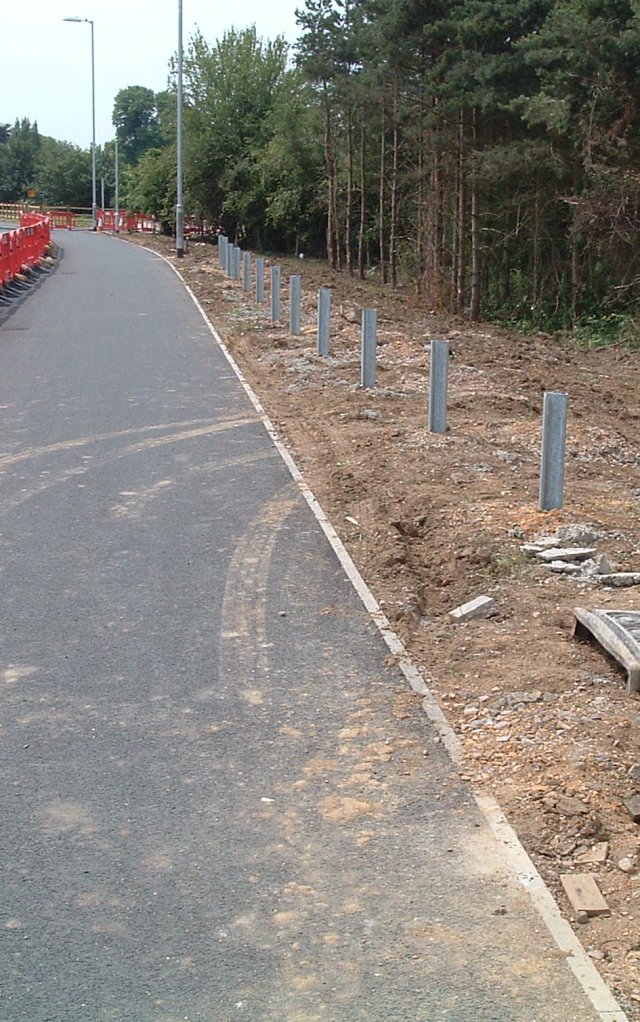 Look to the left, south along the west side of Cambridge Road and you see this. Note the Z cross section posts which will hold a safety barrier designed to stop motorists who leave the road from finding themselves in the ditch. This was criticised by the safety audit of January 2004 because putting the barrier on this side of the path means that motorists will instead of landing in the ditch be diverted along the path wiping out pedestrians and cyclists as they go.

This is not a minor issue. 200 pedestrians a year are killed on the pavement by drivers who have left the road. This compares with 0 per year killed on average by cyclists. 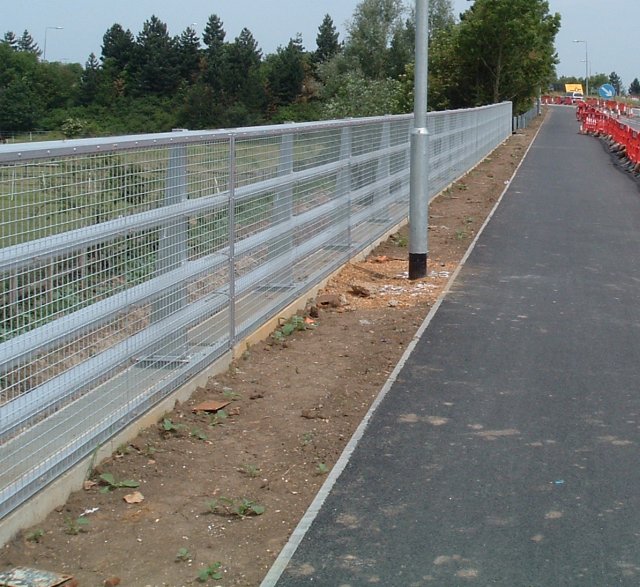 Much the same to the North, more “safety” barriers which put pedestrians and cyclists in more danger. 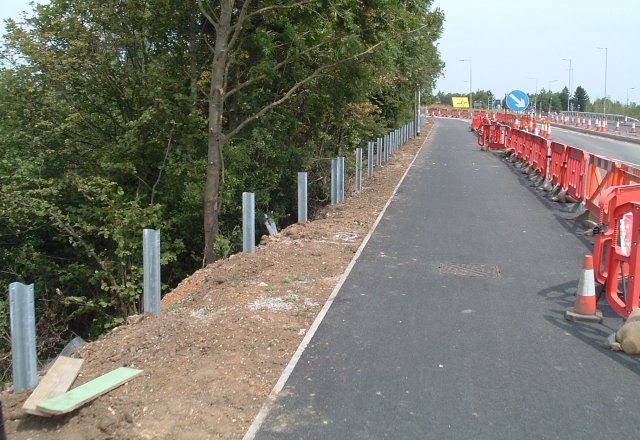 A little further north, more barriers. In this shot at the top right you can also see the barriers which cause the same danger on the other side of the road. 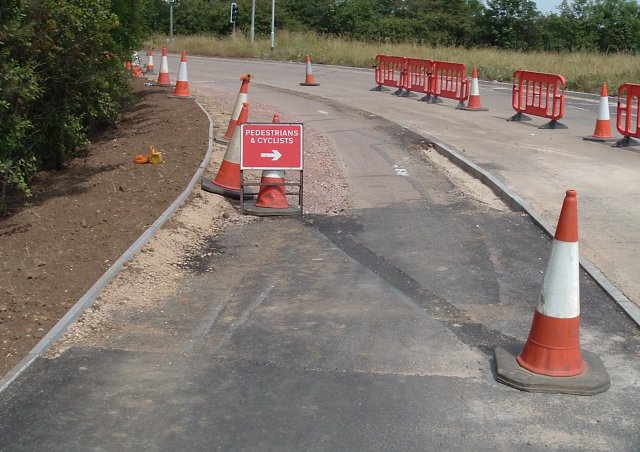 A temporary narrowing, but typical disregard for what pedestrians and cyclists actually need. It’s also another opportunity to see just how thin this path is. It is nice and smooth now, but won’t be for long. 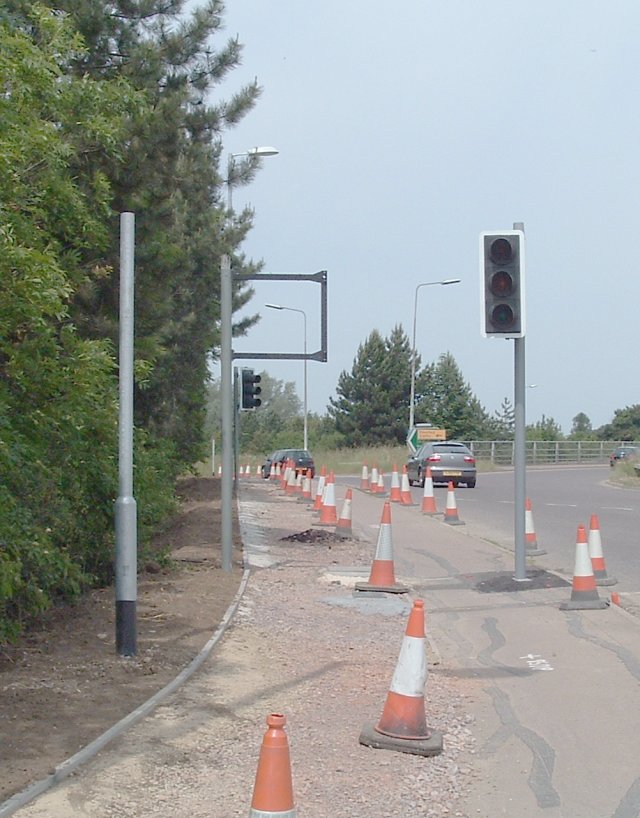 For a little while it seemed like someone had seen sense and decided to put at least one of the traffic light posts to the side of the path and cantilever over the path to the correct position. However, someone else clearly decided that as this wasn’t to the same standard of path obstruction as the rest of the works, it’d better be replaced. So, the traffic lights moved from one post to the other in the last few days.