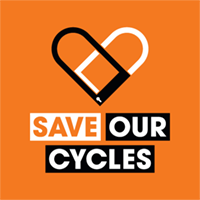 Camcycle has joined with Cambridge City Council, Cambridgeshire Police and other local organisations to launch a campaign to ‘Save Our Cycles’ aimed at helping to tackle a crime that costs Cambridge residents an estimated £3 million per year. Cambridge is the cycle theft capital of the UK and cycle theft is the most-reported crime in the city, despite indications that many people never even report that their cycle has been stolen.

Save Our Cycles is calling on everyone in Cambridge and beyond who loves their cycle to make sure they “lock it & log it” to keep their property safe. Cyclists across the region are asked to register their cycle’s frame number online with BikeRegister.com and to always lock their cycles securely to help combat two of the issues that contribute to high rates of cycle theft. Poor quality of locks and locking techniques make cycles more vulnerable to theft and, if stolen and recovered, the lack of identifiable information to prove ownership often prevents the police from being able to connect recovered cycles with their owners or to prove that a crime has occurred. 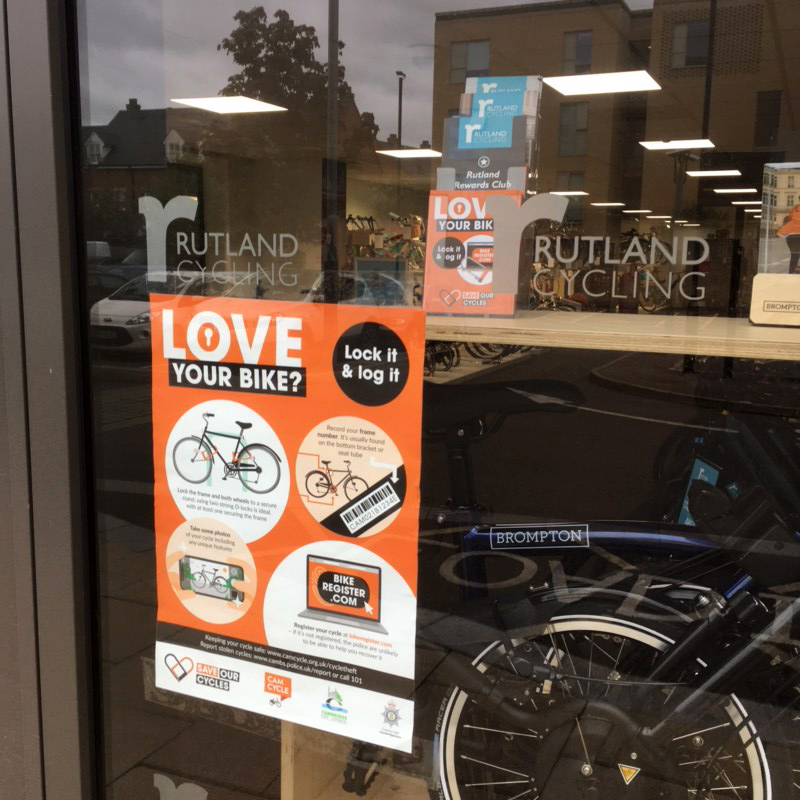 We can all work together to make it much more difficult for criminals to get away with reselling stolen cycles, and much easier for police to catch and prosecute thieves. Widespread voluntary registration of frame numbers online, along with detailed and accurate descriptions of each cycle, can help people make crime reports that improve the chances that police can reconnect stolen property with its rightful owner.

Camcycle will be collaborating with employers, universities and schools to ensure as many people as possible get involved with Save Our Cycles, as well as spreading the word on social media. Bike shops will be distributing leaflets to help customers find and record their frame numbers and the national cycle database Bike Register will be keeping track of the number of cycles that are registered during the campaign. Save Our Cycles will also provide other advice about keeping your cycle safe including how to lock a bike securely, what to do if your bike is stolen, how to ensure you don’t buy a stolen bike and what to look for in secure cycle parking.

After many frustrating years campaigning for action on cycle theft I can say that I am now seeing the most positive action yet. Camcycle is pleased to be collaborating with stakeholders including the police, city and county councillors and officers, Greater Anglia, Cambridge University, Anglia Ruskin University and the business community (via Cambridge Ahead) on a number of initiatives aimed at tackling cycle theft across enforcement, infrastructure and education. Now that action is being taken, it is important that each individual also takes steps to “log it and lock it” and keep their cycles safe. We hope to see a massive increase in the number of cycles registered as the public gets on board with the Save our Cycles campaign.

While recording and registering frame numbers will make a huge difference to tackling the issue of cycle theft, it is just one piece of the puzzle. We also need to see significant improvements in cycle parking infrastructure and security. Too many facilities are easily tampered with by thieves despite individuals making every possible effort to keep their cycles secure. Many developers and facilities managers need to do better on this front and the council must hold them accountable for meeting their responsibilities. We also need to see improved CCTV coverage of cycle parking locations and responsive reactions from operators and the police to ensure this footage is reviewed.

Cambridgeshire Police are working with partners to reduce cycle theft, working on improving infrastructure, increasing opportunities to arrest cycle thieves and those that knowingly sell on stolen goods. One of the biggest blockers to the prosecution of offenders is not being able to positively identify a bike as being stolen. We’re grateful for Camcycle’s efforts with the Save our Cycles campaign as we expect that increased registrations of bike frame numbers will allow us to apprehend more offenders.

The City Council is committed to our partnership with Cambridge police and Camcycle to reduce cycle theft and help the police catch the many repeat offenders operating locally. Cycle theft accounts for the biggest proportion of crimes in Cambridge, and is far more devastating for those who lose their bikes than others realise, particularly the major cost of replacement bikes to young people and people on low incomes. We will look to increase and improve existing secured cycle parking, but we need all cyclists playing their part and taking far greater precautions. Lock your bike to a stand or secure fixture and log it too, particularly as no one will ever find your bike if you don’t register it, and do it now! Otherwise, sooner or later, it’s likely to disappear forever.

I am committed to doing all I can to support local partners and communities to reduce cycle theft and help the Constabulary catch prolific offenders. Whilst our officers are working hard to arrest those responsible, bike theft can be a devastating issue for local people. I encourage all cyclists to ‘log it and lock it’ and keep their property safe.

Omar Terywall, the creator of the Stolen Bikes in Cambridge Facebook Group, said:

I’m pleased to say that we have managed to retrieve a large number of bikes since setting up the Facebook page.  However, there would be more success stories if people were just aware of their serial/frame numbers – and had them registered on Bike Register. We have had an overwhelming number of instances where we, or the victims, have identified stolen bikes by distinctive markings or features – but have failed to recover them because we didn’t have sufficient evidence for the police to act. In each case, sellers claim they have purchased the bikes innocently after checking Bike Register. Despite the victims being able to point out all distinctive features, the sellers have refused to hand the bike back because the owner didn’t have it registered and/or couldn’t provide hard evidence i.e. confirm the serial/frame number. There is no lock that a determined bike thief can’t break. Registering their bike’s frame/serial number on bikeregister.com is, in my opinion, the most important thing that any bike owner could do.

For more information about how to keep your cycle safe visit www.camcycle.org.uk/cycletheft

Register your cycle with frame number and description at www.bikeregister.com. If you don’t have access to the internet at home, you could ask a friend to help or go to the library. Your local bike shop may also be able to help you.