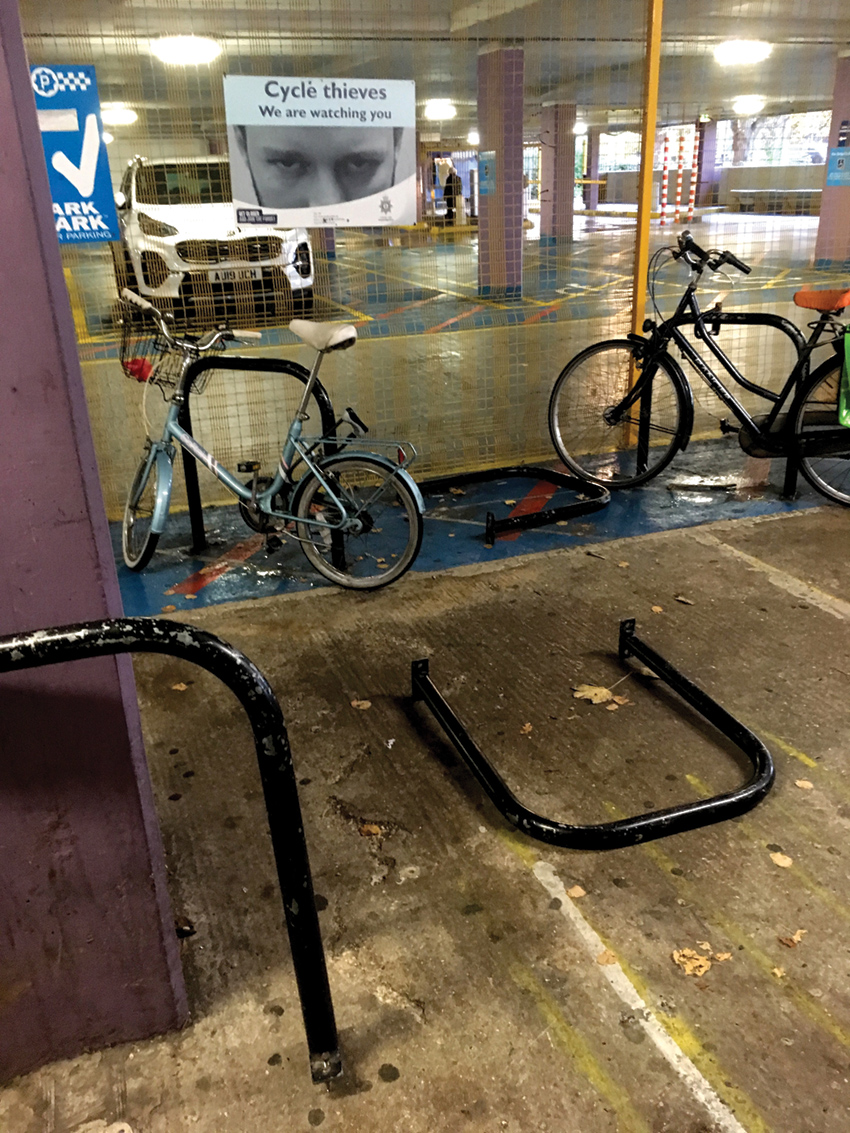 Better cycling means that everyone can feel confident knowing that, at the end of the day, their cycle is where they last locked it. It should be simple, so why has cycle theft become such a problem? James Hems investigates.

Bike theft in Cambridge is four times worse than the national average and twice as bad as in Oxford. In August 2020, BikeRegister reported a rise of 59% on last year’s figures for registered bike theft.

The city of Cambridge represented more than 50% of Cambridgeshire Constabulary’s 471 bike thefts reported in September 2020. Cambridge City Police from North, Centre and South Cambridge Teams received 252 reports of bike theft and with an estimated 71% of thefts unreported to police we believe the number of total thefts in the city of Cambridge was closer to 850 that month alone.

In the city of Cambridge, the quantity, scale and cost of bike theft is horrifying;

There are on average:

Help is out there

The Stolen Bikes in Cambridge Facebook group, founded by Omar Terywall in September 2019, has grown to over 5,700 members. This community works together when a victim reaches out; helping them to report, find and rescue their stolen bike. The group has developed organically, emerging from the frustration with police inaction attributed to public sector cuts that have limited the resources for investigation of bike theft.

Camcycle intern Beth Barker, who recently needed to call on the group for help, found immense value in the supporting and caring attitude fostered by the group. ‘From personal experience it made me feel supported and energised in a moment when I felt powerless and frustrated,’ she said.

The group is entirely voluntary and claims to have facilitated the rescue of more than 60 bikes in the year it’s been in existence. The group has been so successful at recovering stolen bikes they have been featured in the local and national press.

This does not mean you should rely on others to do all the work; we must all help to make cycle theft unprofitable and too difficult for thieves. If you see a cycle theft in progress, you should follow police advice and call 999 immediately to report a crime that is taking place at the moment, or call 101 for a crime that has already happened.

In January 2018, Cambridge police demonstrated that people are not reporting bike theft; plain clothes officers posed as bike thieves with bolt-cutters in busy and prominent Cambridge locations and ‘stole’ bikes. Not a single individual reported this activity to police.

With the lack of police action on cycle theft, it is unsurprising that many people no longer bother reporting their stolen cycles. However, if we are not reporting thefts, or not providing adequate information when we report them, then we make the job a lot more difficult for the police. It is hard to justify allocating sufficient resources when the data do not reflect the scale of the problem. The police have recovered many cycles that they believe to be stolen but cannot prove theft or handling of stolen goods when there are no police reports or other stolen bike registrations related to the frame numbers. Many people have identified their stolen bikes by recognisable features, but without the frame number or proof of purchase/ownership, the police cannot help. We continue to encourage more bike shops to advise customers on the importance of keeping this information and assist people in registering their bikes at the point of purchase.

Police forces in different regions do not share reporting databases, so if the police in London recover a bike stolen in Cambridge then they will not be able to find the report in their system. Therefore, reporting the theft of your bike on a national database and the local Stolen Bikes in Cambridge Facebook group can increase your chances of being reunited with it. It is also worth searching for your bike on selling sites like Gumtree and Facebook Marketplace.

In the spirit of Omar and his group, if we see it, we must report it (and provide a strong report with accurate details and descriptions, especially frame numbers).

It helps if you have the information you need readily to hand. We recommend saving your bike as a contact in your phone with the frame number, description and a photo of your bike.

A summer nightmare: no bike!

It was very hot and sultry on Tuesday 4 August, coming off the 14.57 train from Lowestoft and arriving Cambridge at 17.47 in a daze. No bike! Where had I put it? Round and round I peered in disbelief along the two furthest aisles of the first floor of the Official Cycle Park at Cambridge station. Some gang had run amok and those furthest rows had been utterly vandalised: the racks in disarray like strange trees with hanging wheel rims in a ghoulish display, unseated saddles strewn about the floor, dismembered bike frames like carcasses in one’s path. Even a family of bikes, still attached and intact, seemed as if it was all covered in ash. I walked round again and again, my nightmare subdued by the early evening sunbeams, my reverie interrupted by two or three young passengers who purposefully cycled off. I pressed the Help Button – no answer. I presumed CCTV was unstaffed. I thought Greater Anglia trains had little to do with bicycles. I walked round one last time before stumbling out into Cambridge. A parking enforcement officer on his bicycle said, ‘It’s nothing to do with us’. Do I bother to tell Greater Anglia, the police, my insurance company, Camcycle, the papers? Surely someone is doing something to restore and repair the havoc wreaked at the flagship arrival point of the Capital of Cycling?

Everyone I have since spoken to steers well clear of Cambridge Cyclepoint as being a no-go area: too dodgy, too insecure. WhatsApp is awash with images and warnings. No Bike! – that’s what you’re led to expect at journey’s end, and then walk home.