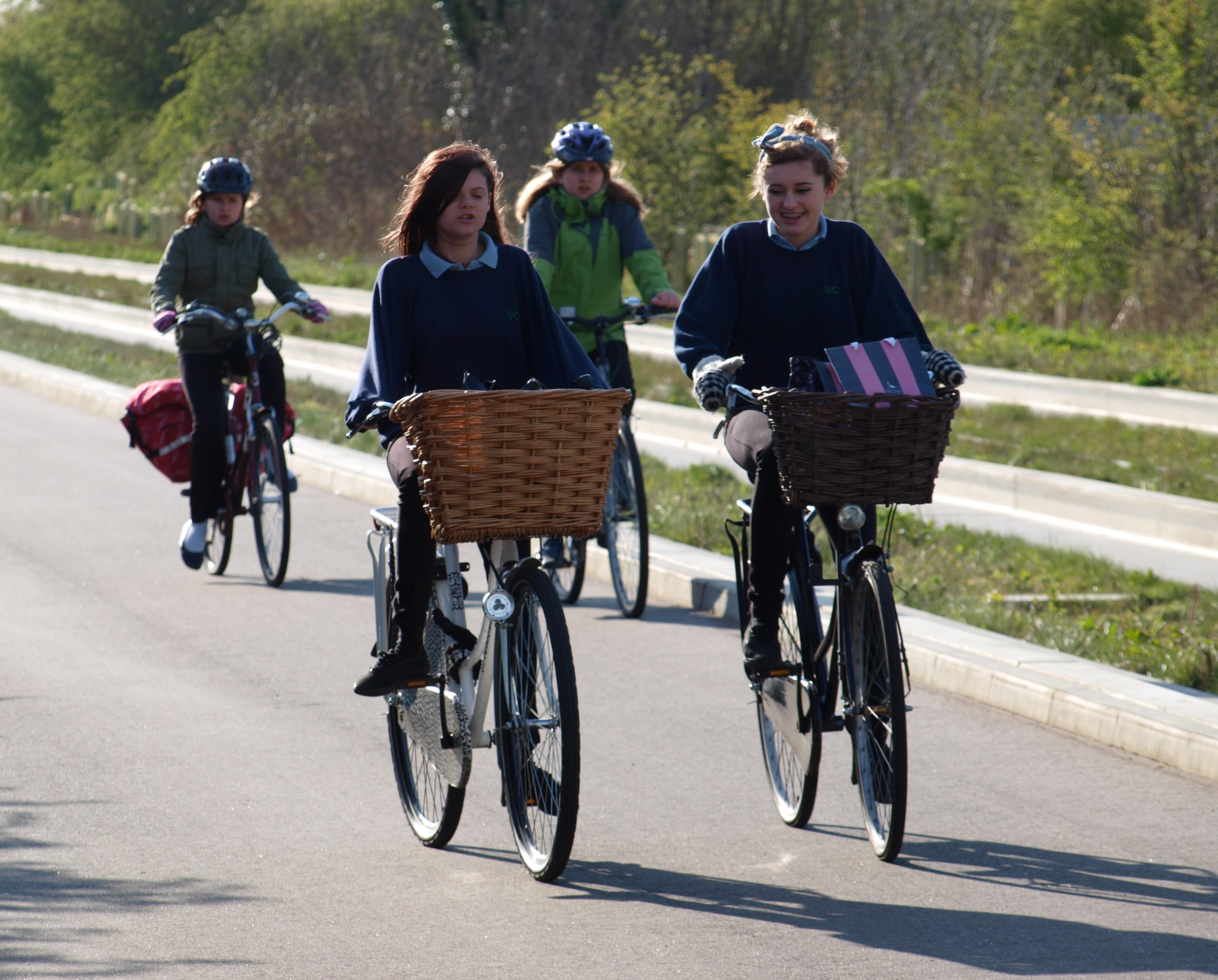 The government has recently launched a new cycling strategy called Gear Change to achieve a long-term shift towards many more people cycling in England. As part of that announcement, the government has also kicked off a review of changes to the Highway Code. There are many welcome things about this effort, and we will be highlighting some issues that we hope you will take up and include in your response, due 27 October.

In this edition, we will be talking about the proposed changes to Rule 59, which covers clothing, helmets and hi-vis. Previously, we wrote about social cycling, side-by-side.

In the introduction to the consultation the Government writes that they will not be considering cycle helmet requirements:

However, wearing helmets, and high-vis clothing, should remain a matter of individual choice rather than imposing additional regulations which would be difficult to enforce. 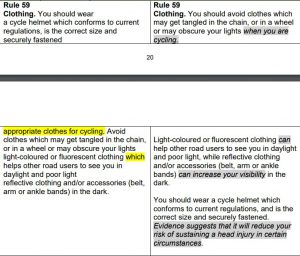 While that is a relief, it’s not sufficient. Even the suggestion of cycle helmets and high-vis clothing must be struck out of the Highway Code. Why? Because those suggestions are still used as material considerations in courts and held against people who do not wear the ‘combat’ garb. Some schools have even persecuted students for not complying with non-existent helmet and high-vis laws. A few misguided insurance companies have started discriminating against cyclists who are not wearing the high-vis and helmet uniform, and they have made it much more difficult to host cycling events open to all people. I can provide an example that hits close to home. Last year, Camcycle was unexpectedly dropped by our public liability insurance company after they changed their policies: after many incident-free years, they suddenly decided to force us to require people to wear helmets and high-vis, which is against our policy, and this problem nearly caused us to shut down many of our social activities until we could find an insurance company without such erratic and irresponsible behaviour. We’ve seen firsthand how the supposedly ‘optional’ equipment is being imposed on people by corporations who couldn’t care less about enabling and encouraging people to cycle, but who are susceptible to fads and illusions. 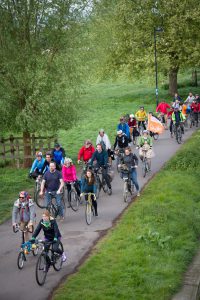 Another example: high-vis clothing is a cult-like obsession in the UK, and there is substantial evidence that it does nothing or possibly even makes things worse. The main purpose of high-vis clothing appears to be making profits for manufacturers of high-vis clothing. Again, such expensive garb forms yet another unnecessary barrier to cycling. It does not belong in any Government recommendations, and most certainly must not be used against anyone in a court of law, nor required by any insurance company.

Furthermore, the existence of the words ‘helmets’ and ‘high-vis’ in the Highway Code is enough to warrant bullying by poorly-informed motorists who do not understand the difference between a recommendation and a requirement. The general atmosphere of fear, misinformation and doubt churned up by helmet-and-high-vis apologists and road bullies is bad enough to put many people off cycling for no good reason. There are also reports showing that helmet-pushing results in discrimination against minority ethnic groups. Enough! The Government should not be fostering such negative attitudes when the evidence is clearly against it.

After all, the Highway Code does not suggest that people should wear helmets for driving or walking, nor does it prescribe a particular colour scheme for cars, and there is no reason to force such things on people cycling either.

If we do not change course, we are headed towards a world where your right to make your own clothing choices will be effectively nullified by overzealous magistrates, school headteachers, employers and insurance company underwriters. Those parties do not have any particular interest in raising the modal share of cycling, and therefore are prone to make decisions that harm cycling levels, to the detriment of public health, sustainable transport and independent mobility.

However, the Government can set rules on the way judges, magistrates and insurance companies operate. Regardless of the final wording of rule 59, if the Government is genuinely committed to getting more people cycling, then they should stop this kind of soft discrimination against people who choose to wear normal clothing while cycling and against organisations (like Camcycle) who promote cycling in normal clothing as a means of general-purpose transportation. The overwhelming weight of evidence shows that the best way to make cycling safer is to have more people cycling, and taking a systematic approach to safety, as demonstrated in the Netherlands, and extensive studies of newly installed high-quality cycling infrastructure.

While the Government seems to be reluctant to modify rule 59 to remove references to helmets and high-vis clothing, it’s really important that they make it completely and unambiguously clear to courts, schools, employers and insurance companies that there is no requirement and the choice not to use such garb must not be held against any person or organisation. The best way to do so is to remove the references to helmets and high-vis entirely from the Highway Code. The next best way is to include an explicit statement that says ‘courts, schools, employers, insurance companies and other entities taking an interest in cycling should not hold any prejudice nor condition any policies based on the use or non-use of clothing or helmets mentioned in this rule.‘

Although perhaps they should also consider adding a rule for drivers suggesting the usage of ‘a properly-fitted car helmet to reduce your risk of sustaining a head injury in certain circumstances while riding in a car or lorry.‘ That would certainly have a public health benefit.