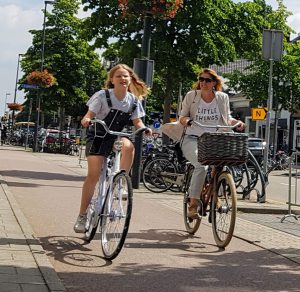 The government has recently launched a new cycling strategy called Gear Change to achieve a long-term shift towards many more people cycling in England. As part of that announcement, the government has also kicked off a review of changes to the Highway Code. There are many welcome things about this effort, and we will be highlighting some issues that we hope you will take up and include in your response, due October 27th.

In this edition, we will be talking about the proposed changes to Rule 66, which covers riding in groups, what you may carry, and being considerate.

I’ll say it straight up: the proposed changes to the first half of the rule are broken and just as misguided as the existing text. The authors of this document and the changes have completely missed the point of why people ride side-by-side. They are very focused on a sporting frame-of-reference, in which drivers and cyclists jockey for position on narrow country roads. That particular aspect might be important for 1-2% of people who are riding cycles, but the significance of side-by-side riding is relevant to 100% of people, yet goes completely unmentioned in either text.

People are social beings and cycling is a social activity. This is something that should be understood by every designer, engineer, planner, architect or any other person who deals with streets and public space, along with inclusivity and accessibility. People are not machines. We are human and we want to be alongside other humans. Parents need to be able to cycle alongside their children, to talk to them, to help them along, to be part of their life. Friends need to be able to talk to each other, just like when walking, or riding in a car. This is incredibly well understood in the Netherlands, where side-by-side cycling is sacrosanct, and you can see why in these photos, taken in Utrecht.

Social cycling is also the key to enabling ‘mass cycling’, the situation where large numbers of people are cycling at the same time in the same place on a regular basis, and everyone needs to get along with all other road users. The only way that can work is through human interaction and consideration, the same way that people can easily navigate crowded places on foot. A purely mechanistic viewpoint of cycling misses a large part of the picture: the passing glance, the smile and wave, the motion of the legs, the signalling through body language, the occasional word, the intuition of making small adjustments to ensure nearby people are accommodated gracefully, like dancing. Without that understanding, these everyday photographs of some of the world’s busiest cycleways in Amsterdam and Utrecht may seem overwhelming. With that understanding of social cycling, these photographs are natural and unremarkable: just another day in a busy place.

There is a certain tendency in the engineering world to reduce every problem to numbers and to see cycling in isolation, rather than being a feature that springs out of livable, sociable streets and neighbourhoods. The engineering world view is very ‘anti-social’ in that it completely ignores the social aspect of human life. That’s how you get diagrams and models that show only a single aisle of ‘cyclists’ as an abstract concept on the street, or so-called ‘infrastructure’ that is so narrow only one person could use it at a time.

I know this is a challenge for some people because over the years I have met a few cyclists who are completely flummoxed by social cycling. They are accustomed to dealing with motor traffic and being a ‘lone wolf’ on the roads, without having to make the human connections and interactions that social cycling requires. A common refrain from them is that they ‘cannot predict how other cyclists will move’, which is a sign they have not learned how to ride with other people who they don’t know. When such people are put in charge of designing roads, they may wind up producing very narrow and precarious designs that suit their approach to cycling but are uncomfortable for the majority of people.

Every so often we need to step back and remind ourselves why we are campaigning for safe cycling. Everyone has their own personal reasons, of course, but many reasons are shared. For me, I want to see a world where everyone feels welcome in public space. Where our cities, towns and villages are attractive and inclusive places, suitable for people of all ages, abilities and backgrounds. Where you aren’t forced to buy and maintain a car just to live, and you aren’t subject to risk of serious injury (or worse), or forced to breathe air pollution because of the selfish actions of others.

Cycling is a tool to help achieve that goal, because it is a mode of transport that is quicker than walking, clean and compact, suitable for human-scaled environments, and that can be socially well-integrated into its surroundings. Cycles are wheeled vehicles, and that should not be forgotten. However, people cycling must engage directly with their surroundings and with other people on the street. They are not hiding behind a windshield. They are connected with the ever-changing impromptu social scene on the street, however briefly.

Therefore, by engaging in this tit-for-tat debate about who should do what and where on narrow country lanes while drivers are jockeying for position with some cyclists, this highway code consultation is completely missing the big picture.

When put in terms of people as social beings, then it is obvious that cycling side-by-side is essential human behaviour. Therefore, there must not be any circumstances under which a driver or a judge feels justified in harming a person cycling because of side-by-side riding. Drivers who harass or honk at people riding side-by-side are behaving in a criminal or anti-social fashion, no different than if they harassed, shouted at, or assaulted people walking side-by-side. We would never demand that drivers remove the front passenger seat from their cars, and in return drivers must treat people cycling side-by-side with due care and respect.

Therefore, we propose that the second bullet point in rule 66 simply be changed to read:

The justification under the five core cycling principles from LTN 1/20 draws from comfort and attractiveness. Comfort, because a family cycling together is going to feel much better if they can see each other and stay in a group. Attractiveness, because more people will cycle when they can treat it as social activity rather than isolated exercise. However, the key understanding is that people are not machines. Cycling is a social activity and cycling side-by-side is as important as walking side-by-side or riding in a car with a passenger at your side. We can only enable large numbers of people to cycle when we understand the importance of simple, fleeting moments of social interaction on the street.

A few other notes about rule 66

One of the bullet points in the rule claims that you should not carry anything ‘which affects your balance‘. This very vague and largely ignored piece of text seems to imply that you should not wear or carry anything at all, because on a bike everything affects your balance in some way or another. Of course, people learn to balance with a wide variety of cargo or clothing. One thing we celebrate in Cambridge is the number of people who carry their families around on bikes, and the wide variety of cargo bikes that people use to do all sorts of jobs. Therefore, this bullet point should simply be dropped, since the plain meaning of it could potentially be used to discriminate against people for doing perfectly normal activities such as carrying children or cargo with them on a bike.

On the final bullet point: we want everyone to be considerate on the roads and take care, especially around vulnerable road users. In this paragraph, the government’s proposed changes seem reasonable. As I wrote above, cycling is a social activity, which also implies social awareness of the needs of people around you, thinking about others, and making adjustments to accommodate them considerately This argues for rewriting the entire rule 66 in terms of social cycling, incorporating and highlighting the importance of side-by-side cycling along with considerate cycling, as a part of preparing for increasing numbers of people cycling in busy places. Much of the rest of the existing rule 66 text is either pointless or could be incorporated into other rules. Therefore the entire rule could be rephrased in terms of considerate and social cycling:

I hope others see the importance of getting this principle right, and join us in pushing for this change.