Plans for ‘improvements’ at a roundabout just outside Ely will make matters worse for people walking and cycling, despite being designed by the same team of engineers that created the new Dutch roundabout at Fendon Road. The proposals Cambridgeshire County Council have come up with to tackle congestion on the Sutton to Ely Road (A142) that provides access to the Lancaster Way Business Park are extremely poor and, together with Ely Cycling Campaign, we are strongly objecting to the plans. The reasons for our objection are listed below and we also note that the project is at risk of losing government funding if it does
not comply with the cycling infrastructure requirements outlined in the government’s ‘Gear Change’ policy and Local Transport Note 1/20.

We encourage you to also object to the plans by completing the consultation survey and sending your comments to local.projects@cambridgeshire.gov.uk by Friday 18 September. You can read our joint response here.

We object to the council’s plans because: 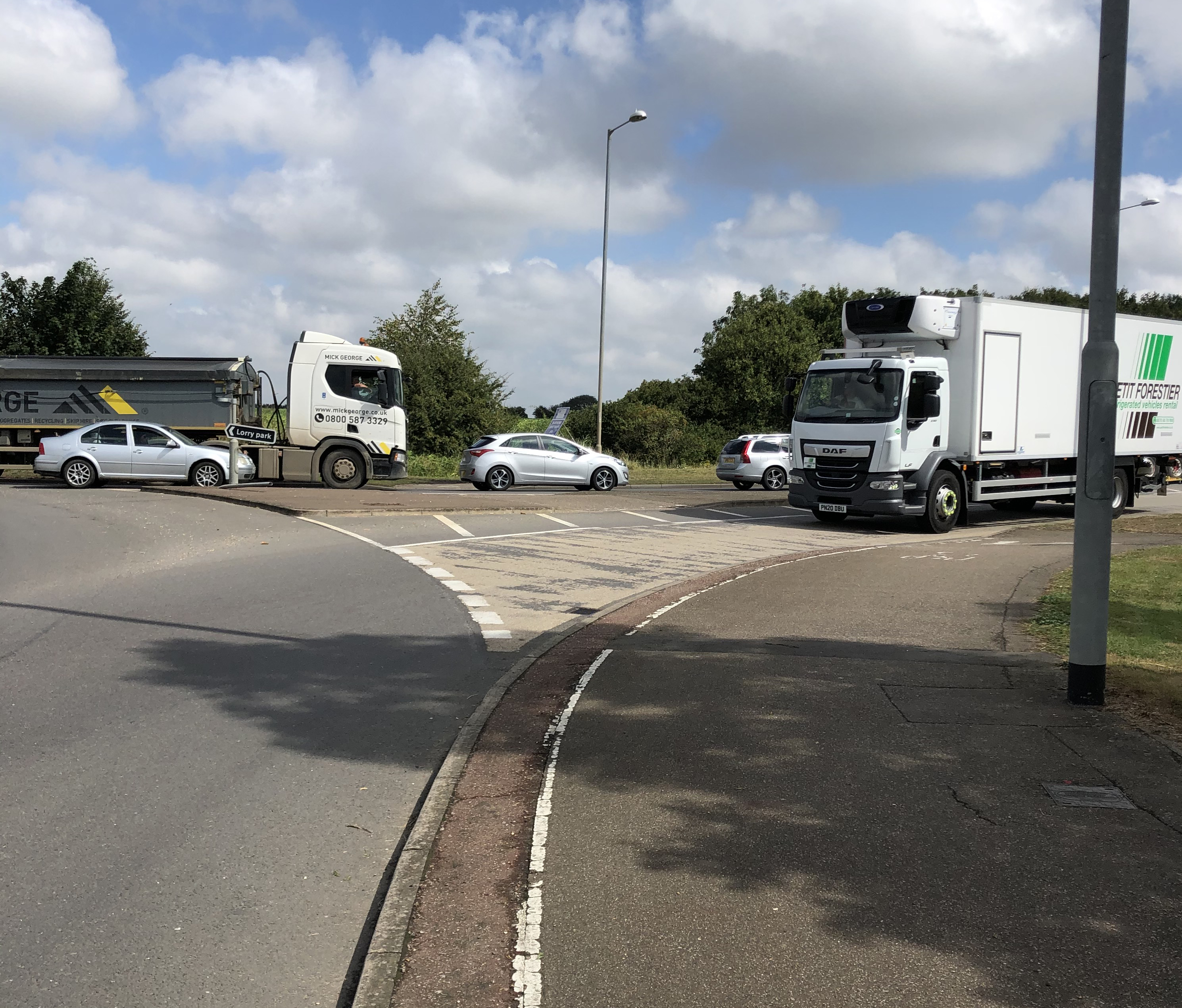 Currently, the pedestrian crossing of the A142 has a central refuge with one lane of motor traﬃc in either direction. These plans are designed to increase the volume of motor traﬃc across the roundabout, which will make pedestrian and cyclist crossing more diﬃcult and more dangerous. They will require pedestrians and cyclists to cross two lanes, which is considerably more diﬃcult and dangerous than crossing a single lane. The new design also opens up the angle that eastbound motor drivers on the A142 need to steer around, so drivers will go even faster than they do now at the point of the crossing. The slackening of the angle of the turn from the westbound A142 onto Lancaster Way, in the approved planning application 19/01704/FUM, will allow motor drivers to take this turn faster and will make the crossing of Lancaster Way (right) more diﬃcult and dangerous. Although not part of these plans, 19/01704/FUM in combination with these plans will make this roundabout profoundly hostile to people walking and cycling.

The National Planning Policy Framework (NPPF, February 2019) paragraph 84 requires that decisions recognise that it is important to exploit any opportunity to make a location more sustainable, for example by improving the scope for access on foot, by cycling or by public transport. Paragraph 91 requires that layouts encourage walking and cycling. Paragraph 102 requires that opportunities to promote walking, cycling and public transport be identified and pursued. Paragraph 103 requires a genuine choice of transport modes. Paragraph 110 requires that applications for development give priority first to pedestrian and cycle movements, both within the scheme and with neighbouring areas. NPPF is a material consideration in planning decisions. The improved roundabout fails to comply with all of the above requirements.

3) The plans fails to contribute to regional goals

The Combined Authority’s Local Transport Plan (LTP), published in January 2020, includes a goal of providing an accessible transport system to ensure everyone can thrive and be healthy. The improved roundabout denies this to those who would like to walk or cycle. The LTP has an objective of putting people first and promoting active lifestyles. The roundabout fails to put people first and hinders an active lifestyle. The LTP also has an overarching strategy that requires that all new public transport and highway infrastructure be designed to include parallel cycling and walking corridors with suitable access and crossing points. The roundabout fails on this too. The existing crossing will be degraded and cannot be considered suitable.

The district council’s Local Plan (LP) Strategic Objective 8 requires greater opportunities to reduce car use. The improved roundabout promotes motor vehicle use at the expense of active travel. The LP has a Strategic Vision of providing better cycling and pedestrian facilities and links, including segregated cycle routes along key routes linking towns and villages. The roundabout makes for worse cycling and pedestrian facilities. And the LP has a Spatial Strategy and Policy of improving pedestrian and cycle networks between settlements. The roundabout goes against the Spatial Strategy and Policy because it makes the network worse.

The redesigned roundabout does not comply with the Design Manual for Roads and Bridges, Road Layout Design CD 116 Geometric design of roundabouts Revision 2. Paragraph 8.2 states that where there is demand or the desire to encourage pedestrians, cyclists and/or equestrians at roundabouts, these users shall be provided for. The roundabout also does not comply with Local Transport Note 1/20. The introduction to Chapter 10 requires that the needs of cyclists be taken into account in the design of improved junctions and that crossings are provided where cycle routes continue across busy highways. The rest of Chapter 10 provides other guidance that the improved roundabout fails to follow.

The government’s Gear Change report (see page 16) points out that increased walking and cycling can decrease motor vehicle congestion if changes are designed well enough to encourage modal shift. This roundabout is perversely designed to achieve a modal shift to motor vehicle use instead.

5) It fails to address the climate crisis

The United Nations Intergovernmental Panel on Climate Change 2019 Summary for Policymakers shows that limiting global warming sufficiently to be manageable (1.5°C) requires rapid and far-reaching changes in transport as well as other polluting activities. The new roundabout focuses entirely on increasing the capacity for motor vehicle movements, which is a mistake on environmental grounds. NPPF requires that planning decisions reflect relevant international obligations.

We reject the claim from the consultation document that ‘a grade separated solution would be needed or full signalisation of the roundabout’ for a safe crossing, which they consider to be too expensive to fund. We know that it is feasible to install lower-cost, at-grade, controlled pedestrian and cyclist crossings here, even on a busy rural roundabout arm, according to Local Transport Note 1/20. Furthermore, the Greater Cambridge Partnership is building a such a crossing on the A1307 by the Babraham Research Park roundabout, in a very similar situation. Therefore, there is every reason to put in controlled pedestrian and cyclist crossings around the Lancaster Way roundabout as well.

7) It fails to use developer funds for active travel

The council required the Lancaster Way Business Park developer (Grovemere Properties) to contribute towards a pedestrian and cycle crossing of the A142 Lancaster Way roundabout. At some stage, this requirement has been forgotten.

8) It will not solve congestion

As mentioned above, the roundabout is being changed to increase motor vehicle capacity on the local roads. The rationale for increasing motor vehicle capacity is that the extension of the enterprise zone at Lancaster Way Business Park will generate thousands of jobs. Of the 2,518 to 3,194 full-time jobs, between 1,888 and 2,395 will be for people living in East Cambridgeshire. The main road (A142) access is a major thoroughfare for long-distance journeys. By increasing its capacity, the road will become busier with vehicles undertaking these longer journeys. This phenomenon of induced traffic has been known since 1925 and there have been multiple confirmatory reports since. The Department for Transport Standing Advisory Committee on Trunk Road Assessment took evidence on trunk roads and the generation of traffic and published an authoritative report in 1994. A key conclusion from that report was that increasing road capacity quite extensively induces people to make more and longer trips, although the effect varies widely according to the circumstances. The configuration of traffic flows in the Cambridgeshire road network, taking into account the A14, points to increased capacity at this roundabout increasing long-distance travel on the A142, not shortened commuter travel times.