The Chisholm Trail is our proposal for a premier cycling and walking route joining the north of the city to the south.

It offers the major possibility of replacing many difficult driving routes with a new route that would be accessible by bicycle easily and quickly, freeing up roadspace and reducing congestion. Accordingly, it would benefit both cyclists and drivers.

The central section offers opportunities to create a ‘linear park’ in some sections, adding greenery to the area, and providing opportunities for leisure as well as utility trips both on foot and by bike.

A feasibility study for the Chisholm Trail has just been completed by the County Council, and further work therefore needs to be done to take the proposals forward.

The cycleway alongside the guided bus route currently provides links from Northstowe and Orchard Park to the Science Park area, and from Trumpington Meadows and Clay Farm and the hospital to the Railway Station area. 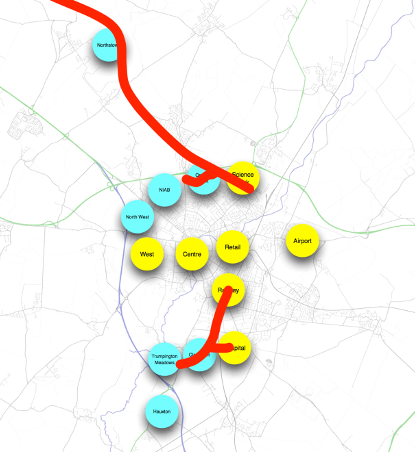 The proposed route would connect North and South busway cycle routes, providing links to many areas of housing, employment and education. Much is already listed in the Cambridge Local Plan.

In the central section, between Coldhams Lane and Hills Road bridge, there is potential for routes on both sides of the rail route, giving improved access to the station and some recent and proposed housing developments.

Some sections could use areas or rail land currently out of use or little used.

3.2 Links to the Chisholm Trail

For the Chisholm Trail to be as successful as possible, many points of access must be created.

Numerous access points from existing and proposed developments should be easily available and would greatly add to the value, and hence usage, of the route.

It would provide routes for cyclists over the stretch from Trumpington Meadows to Impington that would be far quicker than by car for average cyclists. Trips to the rail station would be particularly advantageous.