Cambridge and the surrounding necklace villages is a compact cycling area. The vision for Cambridge is that the modal shift continues towards cycling, thereby reducing CO2 emissions from transport for the city. A modal share for cycling of 40% of all journeys for Cambridge city, and 20% for Cambridgeshire, is the desirable level to which the councils should aspire.

For such a high modal shift, major employment and residential centres within the city need to be connected with high-quality cycle super-highways.

Cambridge has two main axes that contain most of the employment and destinations for trips. One axis runs between the Science Park area in the north east of the city, through the Eastern Retail area, the Railway Station, to the Medical Campus in the south west of the city. Another axis runs between the western University area through the City Centre, to the Airport area. The main residential areas are to the north, east and south east. The city itself is divided by two major barriers, the river and the railway.

The primary vision is to provide the convenience of an attractive “Cycle Super Highway” along a spinal route between the main three employment centres, and to connect this super cycle highway to the existing cycle network within the city. Parts of this vision has already being built; the cycleway alongside the guided bus route provides links from the medical campus in the south to the railway station, and from the Science Park to residential areas further out. The “Chisholm Trail” that links the railway station to the Science Park is the missing link.

A secondary vision is to improve the safety of people who choose to cycle. Major junctions can be both intimidating and dangerous for cyclists. Re-engineering these junctions can provide significant benefits for cycling not just at those junctions, but also to the wider area. These junction improvements can therefore improve the access for people who cycle to reach the main shopping areas and University. Reducing the collision rate through better infrastructure will encourage more people to have confidence to cycle. And cutting speeds in residential areas will help reduce the severity of collisions when they do occur.

Finally, the vision links Cambridge with the wider suburban environment around the city. Some villages have recently seen stronger links to the city, encouraging the desired modal shift. The city needs to be connected with strong cycling links to all the surrounding villages.

Cambridge can be seen as having seven major commercial, educational and retail areas: 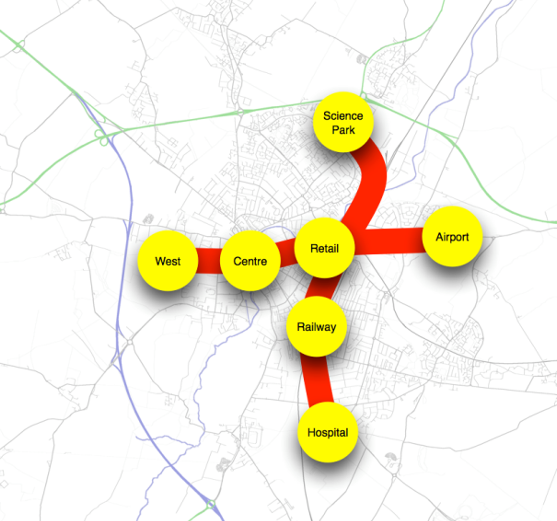 The east/west axis can be considered as extending out into the semi-rural necklace villages towards Cambourne and Comberton in the west, and towards Burwell, Newmarket and Fulbourn in the east. This would link two major villages through the centre of the city. 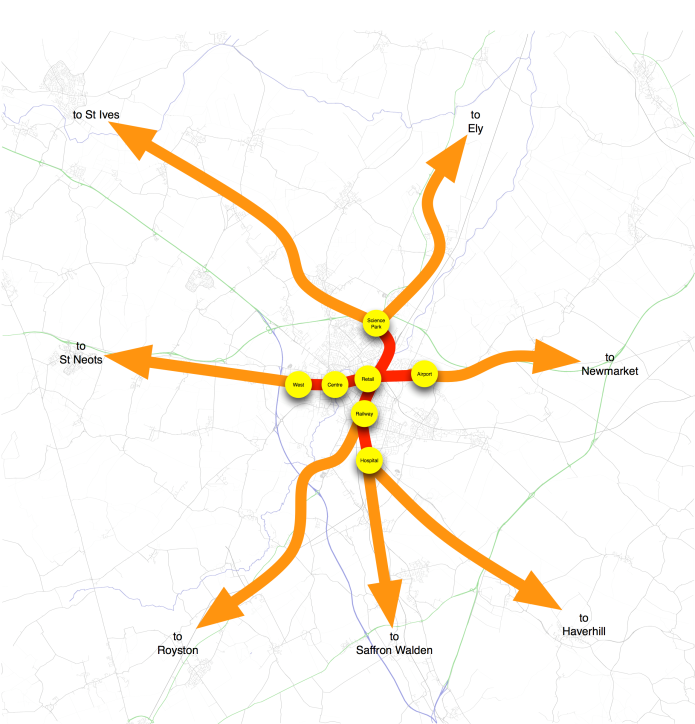 2.3 Adding new housing into the structure

However, there are also eight main areas of new housing being developed within the urban Cambridge region.

In addition, there is a new town, Northstowe, being developed within cycling distance of Cambridge on the route towards St Ives.

These nine new housing areas need to be connected to the main commercial axes for them to be successful, and for these developments to be sustainable. 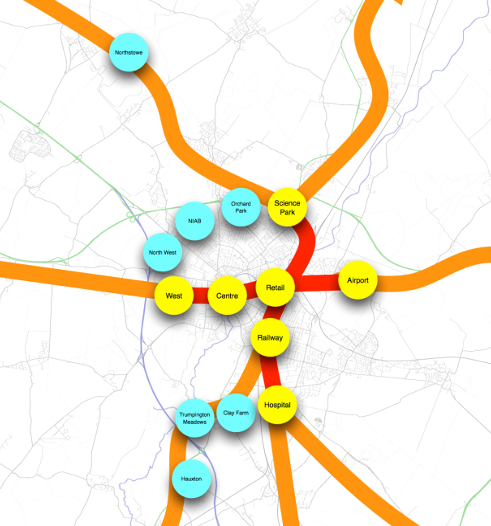 The vision therefore includes an orbital cycling and walking route that links all the housing areas on the north and north west of Cambridge to the western University and Science Park areas. It also links the Science Park area to the airport, providing a vital river and railway crossing. It further links the western area with the housing areas in the south, and these southern housing areas with the hospital area. Finally, it links the hospital area with the airport, removing this traffic from the main axis going through the railway area. 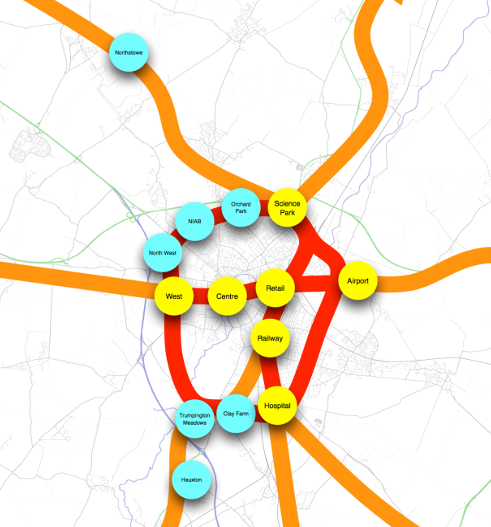