We’re pleased to announce that Cambridge Cycling Campaign is now a Charity, working to promote cycling for the public benefit in and around Cambridge. Read more about this excellent news later in this Newsletter.

The news (see our article) that Cycling England, and therefore many of its programmes such as the great Bikeability scheme, could be facing the chop is disastrous for the future of cycling in this country. We are trying our hardest to stop such a development. It is possible that an announcement will already have been made by the time this Newsletter is published.

Bikeability has led to a revolution in cycle training for children (and adults also) around the country. The old Cycling Proficiency sometimes involved training by people who did not cycle, or playground-only exercises that do not reflect the realities of cycling on our streets today. However, the Cambridge scheme does seem to have been run better than the national average. Bikeability has been highly effective, with a large uptake (300,000 nationally, and a high number in the Cambridge area), for only £15 m a year. As well as promoting physical activity amongst the young, Bikeability should mean that all these children will grow up to become better drivers in later life, being more used to the issues faced by cyclists. 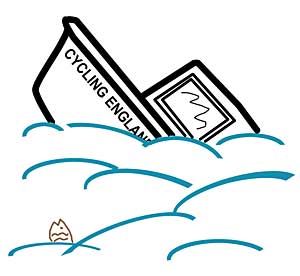 Cycling England’s other flagship scheme, the Cycling Demonstration Towns, has seen similarly encouraging improvements. Cambridge is of course one of the Towns, and here we are seeing the implementation this year of a variety of schemes, including various links to villages around Cambridge, the Gilbert Road improvements, increases in cycle parking, reallocation of road space on Hills Road Bridge, a notable increase in promotional activity, and much more. (Thankfully, work underway or scheduled is already funded and not at risk from future cuts.)

A further important aspect of the Towns is the requirement that schemes meet a higher set of standards than has hitherto been the case, hence the welcome absence of substandard 1.2m cycle lanes in the new schemes.

Just as worrying, though, is the idea that cycling would no longer have an internal advocate in the Department for Transport. Passing on the responsibility for improving cycling conditions to local councils without well-thought-out guidance, without ring-fenced funding, and without the impetus that comes from a dedicated cycling body means that councils will be under little pressure to do anything about an already marginalised mode of transport.

If the worst comes to the worst, Cambridgeshire would hopefully buck that possible trend, but would find it difficult to do so without the funds and thus the personnel. Members need to be prepared to pressure the County Council in the coming months as cuts bite.

This summer has seen some terrific cycling-promotion events.

The I Bike Cambridge event (reported later in this Newsletter) on Parker’s Piece was a splendid weekend with a number of innovative stalls and events, such as Amy Fleuriot’s fashion show. In terms of our own events, we held two great ‘Ride For Joy’ events. And our stall, with the wonderful yellow stall bike, came out on several occasions to increase recruitment and tell people about what’s going on.

We congratulate Cycle Cambridge at the County Council for their work, and everyone else who has helped out in various ways with our own events.