This letter was a response to one which Campaign committee member Nigel Deakin sent to members of the County’s environment and transport committee, in which he urged them to approve changes designed to improve cyclists’ safety at this junction. Shona Johnstone is chairman of that committee.

As I explained at the [Campaign] AGM on 6 October, I thought that the Silver Street stage of the core scheme should be linked to the Grand Arcade scheme. I do not necessarily mean that no work should take place until then – indeed there is no guarantee that the Grand Arcade will go ahead; rather that the planning should be linked, so we are not in a position of having to undo work that might conflict.

Any decision about the future of the Lensfield Road junction is bound to arouse a great deal of passion. There is a very fine balance to be struck between safety improvements at the junction and the disbenefits that would arise from installing traffic lights. These are the increase in queuing traffic with the potential for gridlock increases in pollution levels. I also have to take into account the fact that local people are opposed to having traffic lights at the junction.

Although I accept fully the right of the cyclist to travel on the public highway, there are alternative, safer cycleways which could be used. There are now many areas in Cambridge where we are saying to drivers ‘to improve traffic flows and pollution levels you may not drive along this road.’ Motorists now accept this. In view of my comments above, I do not think that it is unreasonable to say to cyclists ‘you may prefer to use a safer route until we can resolve the outstanding issues surrounding this junction.’

As a very keen cycling family, we are very worried about the new McDonald’s on Madingley Road and wonder if you can help. At peak times (all weekend, and lunchtimes) one car crosses the cycle path to enter or leave the McDonald’s every five to ten seconds. (I have watched and counted.) Last Saturday I called the police and the restaurant was temporarily shut down whilst the problem abated!

This development makes a complete mockery of the cycle path. It’s now actually more dangerous calling it a cycle path than if it weren’t there. 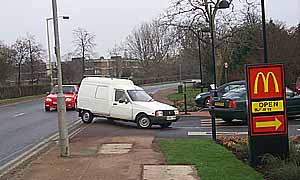 Long queues mean traffic constantly tails back across the footway. On Saturday lunchtime at McDonald’s on Madingley Road, it took the manageress only 30 seconds to appear and demand to know what I was doing filming (off their premises) – ‘People will not move on’ she said. ‘We have somebody out here all day on Saturday just moving the traffic on. You can’t physically make people move on. If we had a drive-through we wouldn’t have half these problems. Most of these people just come in, eat and go… It would be so much easier. We need about another seven McDonalds and it would be cool then.’ Heaven forbid! Silverwood Close residents can be thankful they won against McDonald’s on Coldham’s Lane. This shows all the objectors’ fears were justified.

I never liked the idea of helmets (Newsletter 21 page 10); however, I bought one of unknown provenance at a CTC sale for 50p to help the funds. I found it better than a cap: it didn’t blow away, it kept the sun off my bald pate, therefore no sunstroke, and it was less sweaty than any cloth cap. It also probably saved my consciousness when I had the only spill off my bike (Newsletter 20, Westley Waterless). The point of this is that I believe helmets are a good thing. Although no-one likes compulsion, it does need to be said that some of the negative aspects of helmet wearing are simply not so much of a problem as one would expect.

The circular path round Grafham Water (Newsletter 21 page 11) is jolly rough in places; I went round on my beautiful black Sunbeam and the jolting made my hands ache. I don’t know how my old father got on but he seemed OK. The paths were so rough in places that I proceeded very carefully, and father walked some lengths. One chap on a mountain bike, though, passed us on a downhill scree at about 30 mph, a danger to himself and all other users nearby.

Coincidentally, in the week in which Newsletter 21 arrived, with its excellent coverage of cars parking in cycle lanes, I met an extremely bad example on my way home up the Huntingdon Road. It was dark and raining, with a good deal of reflection from oncoming lights on the road surface. And there, parked on the solid white line, empty and quite hard to see, was – a police car. Much as I appreciate the job an over-stretched force is doing, this is surely unacceptable, and I have written to the Chief Constable about it. It was good to be reminded of the other side of the Force in Clare’s interview with PC Lappin.

What must have been a small fortune has been spent resurfacing the A10 between the M11 junction and Harston village, and a very nice surface to cycle on it is too, except for the traffic whizzing past at 60 mph or more! Beside it there is a broken up strip of tarmac laughably called a cycle path. This is precisely the sort of stretch of road where a good quality shared-use path would actually be welcome, but it appears they couldn’t spare enough tarmac to do the cycle path as well. We are left with a strip which dwindles to barely 12 inches wide in places, is often overgrown and at this time of the year is covered in wet dead leaves.

I attempted to use this to return to Cambridge at the end of my first day working in Harston, and I can safely say I have never used such an appalling ‘facility’ – the bit between the M11 junction and Trumpington was the worst because there are no street lights, and even with my quite decent headlamp it was quite hard to follow where the strip of tarmac meandered as it bumped over tree roots and bent around lay-bys. Twice I had to halt simply to let a bike pass the other way. I returned to the road as soon as I reached the speed limit signs, and I haven’t attempted the route since. I prefer to do more than a mile extra on the unlit roads and tracks via Haslingfield and Grantchester – at least you’ve got a bit of elbow room!

Are there any plans to improve this cycle path, and if so, when?

There is also an interesting situation at Scientific Generics where I now work. The firm has had plans for expansion turned down, partly because of objections to the proposed enlargement of the car park and fears of increased traffic levels. They are therefore actively looking at all sorts of ways of reducing car usage! An e-mail came round asking people what they thought was a ‘reasonable’ distance to cycle to work (each way). The early consensus, with which I tend to agree, would indicate about five miles. I certainly find the ten miles I currently do (but only two or three times a week) a bit much in terms of the time it takes, and not particularly enjoyable at this time of year. I’ll keep you posted on progress, though I’m sure there are other Campaign members at SG as I’ve seen some literature on a notice board. The firm is a member of the Cycle Friendly Employers Scheme.

See ‘Harston‘ in David Earl’s round-up of campaign news for more about this. I cycle about 4½ miles to work, and in winter I’m pleased it is no further. I’d agree with the five mile figure you suggest – Ed.