The issue of motorists parking in cycle lanes has cropped up on numerous occasions recently, in a variety of circumstances, so I’ve been paying more attention than usual to parked vehicles.

The problem is actually much broader than I first realised. It’s not just bike lanes that are disregarded by some motorists. Bus lanes, and restrictions outside schools and at pedestrian crossings are routinely ignored too. People who drive motor vehicles seem to think that if they’re off the carriageway, they’re out of the way. They wouldn’t dream of blocking other cars, but a significant minority don’t seem to care about blocking pedestrians and cyclists at all.

There are two sorts of on-carriageway cycle lane:

The meaning of single and double yellow lines is not as simple as it might be. They indicate ‘no waiting’, not ‘no loading and unloading.’

The Highway Code (currently, rules 138-140) gives chapter and verse on where motorists can and cannot park, including restrictions at pedestrian crossings and outside schools.

People’s perception of the magnitude of the problem varies depending on where they travel in the city.

For example, a number of members have pointed out that on King Street, at the junction with Malcolm Street, there are frequently cars parked in the mandatory cycle lane. Contractors find the cycle path on the Malcolm Street pavement a convenient place to park, too. We have written to the City Council, asking for the CCTV camera pointed directly at the offending cars on King Street to be used to provide evidence to enforce the regulations. This may require a change in the CCTV guidelines in order to be possible.

The gap at the junction of Market Street and Sidney Street, which exempts cyclists from the Sidney Street No Entry sign, seems to be a handy place for contractors to place equipment. (Mind you, the gap is really on the wrong side of the road, so not all cyclists use it anyway.)

The contraflow cycle lane on Pembroke Street and Downing Street seems to be fair game for delivery vehicles, which force cyclists out into two lanes of oncoming traffic.

I’ve even seen a taxi parked in the short stretch of mandatory cycle lane at the Bridge Street bollards. This completely blocked cyclists’ right of way, just at the point where buses are swinging into your path at the best of times. He was very conveniently parked right by a phone box, but unfortunately he returned to his vehicle just as I was about to phone it in. He may not realise it, but he has single-handedly set my heart on getting a mobile phone!

I frequently see cars parked two-abreast, in the bus, bike and taxi lane, by the take-away shops on Milton Road, close to Mitcham’s Corner. Motorists seem to be making increasing use of the bus lanes on Newmarket Road, too, albeit not for parking.

Elsewhere, along Barton Road, the older section of cycle track is seen as a convenient place to park cars and wheelie bins.

However, just occasionally someone restores my faith in humanity. I recently heard of a car parked beside the mandatory cycle lane in Gwydir Street, close to the Mill Road junction. The driver had parked outside the cycle lane, leaving a gap for bikes to pass on the left.

What’s to be done? 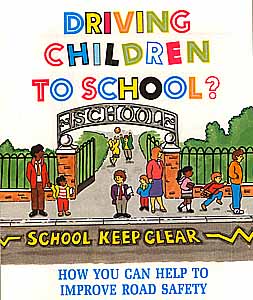 In London, the City of Westminster’s Road Safety Unit and Department of Education and Leisure have got together to produce an excellent leaflet for people Driving Children to School. It talks about the numbers of children killed going to and from school each year and the hazards that parked cars outside entrances present. It promotes the alternatives, such as walking all or part of the way. And it goes on to explain the Keep Clear markings outside schools. (Not that they should need explaining, of course.)

This is a much more focused and informative approach than the more general ‘Cyclists Beware, Beware Cyclists’ one taken in Cambridgeshire. Instead of discouraging people from using sustainable transport, it promotes alternatives to the private car whilst simultaneously addressing the source of danger. We have a dozen copies of the Westminster leaflet if anyone is interested in seeing it.

As for enforcement, Cambridgeshire Constabulary is currently blitzing cyclists riding without lights. I have no problem with this. The law clearly states that bike lights are required on the highway after dark.

However, I wonder whether a similar campaign could be run in future, complete with publicity in the local press, targeting illegal car parking?

In the meantime, to report a problem, phone the traffic wardens at Parkside on 358966. If you are lucky, and one of our over-stretched traffic wardens is in the area, there will be a response.

And finally on enforcement, a couple of gems from the Transport White Paper that I really enjoyed. Recently, more London buses have been equipped with cameras so that car drivers who use or obstruct bus lanes can be caught and prosecuted. And London Transport is to offer traffic wardens (sorry, parking attendants) free travel passes, allowing them to ride on buses and target illegal parking in bus lanes!