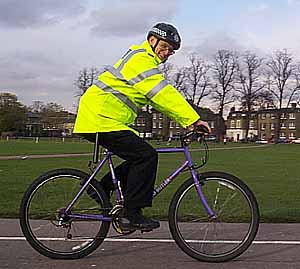 A few months ago I stopped PC Mark Lappin, West Chesterton Beat Officer, cycling across Midsummer Common, to ask him if we could do an interview for the Newsletter. He kindly agreed.

How many cycling police are there in each of the Cambridge sectors? In the City of Cambridge there are three Sectors. They are North Sector, (where I am based), South Sector and City Centre Unit. All Community Beat Officers in all 3 Sectors have access to cycles, about 15 officers in all. As well as the CBOs, there are a number of Traffic Wardens who use bikes.

How long have there been cycling police in Cambridge? I can’t really say how long, although the bike was here before the car!

Do the cycling officers receive any sort of special training? No.

What sort of bikes do you ride? Most officers have police-issued Dawes cycles. Those officers that don’t have Dawes bikes are given unclaimed mountain bikes from the Cambridge cycle store.

How are they maintained? By a local cycle shop.

Are you given any special clothing? The only special clothing issued to officers is a cycle helmet. This is not worn by all officers as some prefer the police custodian helmet, because they can leave the bike when they get to their beat and go on foot patrol. All police officers are issued with reflective jackets, which are worn by most officers when cycling.

What do you feel are the advantages of policing by bike? As well as being more accessible to the community, officers on bikes are able to get to places inaccessible by car. They are also able to patrol more of their beat during a shift.

Any disadvantages? It can be cold and wet during the winter months!

Do you enjoy patrolling on a cycle? In the main, yes I do.

Any other comments? Parkside has its own Cycle Squad, and they have supplied these facts and figures.

Lastly there is a Cycle Campaign running in North Sector between 2nd and 16th November. In the interests of public safety, all police staff within North Sector will be engaging in a campaign of:

Cyclists should be aware of the following:

Cycling without lights during the hours of darkness is dangerous and many people find it offensive. Riding without lights on a highway during the hours of darkness is against the law. Look after your cycle, mark it, remember the mark and lock it. Officers will stop and deal firmly with anyone found committing offences on cycles and they will also ask these cyclists to confirm ownership of the cycle.

When I went to Parkside to take a photo of PC Lappin, I took the opportunity to ask a few more questions of various officers.

Does Parkside still offer a cycle postcoding service? We had to stop stamping postcodes on bikes, because of the variety of new alloys being used. The risk of damage to frames, and of liability, was just too high. The process invalidated the guarantee on new bikes, too. We do now sometimes use ultra-violet inks, though, and kits for this can be found in shops easily. 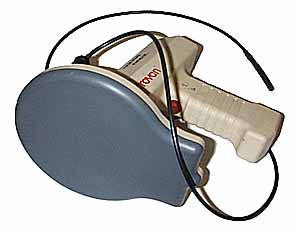 Do you have a DataTag scanner, for identifying recovered bikes? Yes. We also have a direct link to the central database, so we can check bikes identified by DataTag. The trouble is, though, that there are now so many different schemes for registering bikes.

We’ve heard about an idea for some police bikes having transmitter devices so they can be tracked if stolen. Is this still being done? Yes. Once we got over potential problems of entrapment, we’ve found it to be effective, and an idea that’s still in use.

We are concerned about the definition of Road Traffic Accidents, and whether cyclists are counted. We are one of the few forces in the country that logs single-cycle incidents on the highway. However, off-road incidents are not recorded.

Are Fixed Penalty Notices now being issued to cyclists riding illegally on pavements? No. So far as we know, there is no rule that allows us to do so.

In the space of one week, I’ve now met eight different officers at Parkside! I certainly came away with the sense that many issues we care about are already being taken seriously. We’ll be talking more over the coming months about issues that concern cyclists (and pedestrians too) and about what can be done. In the meantime, if you have had any experience of cycle theft, or anything discussed here, please do let us know of your experiences.