After nearly four months, we finally got a reply from the County Council about Airport Way and the new roundabout on Newmarket Road (see Newsletter 12). Our letter was delivered incorrectly within the Environment and Transport Department. In the meantime, the stretch of road we wrote about has been ploughed up.

The letter said that:

However, the last point contradicts what we were told verbally. We were told that some money had been found to do this by surfacing the Teversham and Cherry Hinton cycle track in black rather than red. However, this money had been sucked back into the overall road scheme because of overspending, instead of going to improving the Newmarket Road cycle way.

If you’ve been to the railway station in the last few weeks you’ll have noticed that a cycle lane has appeared on Station Road across the mouth of Tenison Road. We were consulted about this, but given exactly one day to comment! What do you think about this surfacing? It is worth making any further comments even though the work has now been done, because it may help elsewhere.

I think these lanes emphasise the presence of cycles rather well (though the effect might be negated if overused), but aren’t generally quite wide enough. The new lane is 1.6 m wide. Cycle Friendly Infrastructure (the Department of Transport endorsed guidance book) says they should be 1.5 m minimum, and ideally 2 m. There are lots of other things that could be done in Station Road to improve conditions for cyclists, though.

The reason given for the very short notice was that the contractors with the red paint were in the City doing other things. Indeed we found them busy painting the town red at the bottom of Castle Hill the previous Sunday, where they were welding an enormous cycle logo onto the road with a blowlamp (cover picture).

We have now seen plans for the junction of Mill Road, Gwydir Street and St Barnabas Road, and made comments on them. You may remember from a previous newsletter that this scheme (which Friends of the Earth first asked for about ten years ago) was top of the list on the accident remedial budget (the Royal Cambridge Hotel was top the previous year).

The scheme is to have traffic lights to help cyclists cross Mill Road. There is a particularly heavy cycle flow both across and along Mill Road at this junction. Mill Road will have separate phases northbound and southbound to help right turns, and St Barnabas Road and Gwydir Street will have green lights simultaneously.

There will be (much needed) pedestrian crossing facilities, and there will be forward stop lines on all four approaches (though only St Barnabas Road and Gwydir Street get approach lanes). We have sent a letter strongly welcoming the scheme, with some minor comments about the extent of the approach lanes and the quality of the road surface on Mill Road, and suggesting St Barnabas Road gets a small head start over Gwydir Street when the lights turn green.

Another scheme that we have mentioned before is going the rounds of consultation again – this is a minor proposal to put a large protective island on Barnwell Road next to the Quorum building and provide access to it from the cycle track at either side. This is in response to a number of casualties among cyclists and pedestrians crossing there. The revised scheme enlarges the island, and extends the shared use footway on the eastern side – about which we will have something to say. 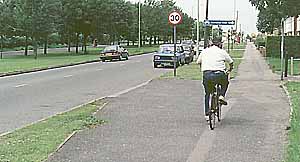