We’ve been busy writing letters about various bits of construction going on or proposed around the City in the last few weeks. Here’s a brief round up.

We mentioned the proposals for cycle tracks leading north out of Cherry Hinton in the last newsletter, and the reconstruction of the roundabout on Newmarket Road by the Airport. Part of this construction (which is going on now) would divert traffic from the present Airport Way to the new roundabout about 100 m east of the present junction. This would add about 200 m to cyclists’ journeys. The April general meeting decided this really wasn’t good enough – the old road could easily be kept open for cycles only. Therefore we wrote to the County Council on April 4, asking that this be reconsidered before it was too late. We have not yet received a reply, which is unfortunate, given the progress on construction.

Airport Way construction. The new road is on the right, and the road to be closed on the left. A cycle track will cross the picture in a few weeks – construction of the cycle track further south is already well forward.

A second consultation leaflet was sent out to homes in Newnham in March by the City Council. This followed a negative response to the earlier leaflet, which proposed cycle lanes. Although it took account of what we had said, that earlier suggestion was not the same as ours, which proposed using road space, but segregating the space.

Anyway, the second survey yielded a 40% response rate, which is extremely high for an exercise of this kind. The hugely predominant view was that a two-way segregated cycleway on the north verge was preferred. Therefore, subject to committee approval, the scheme that will go ahead is a 3.5 m surface, segregated by colour and a low kerb. This kerb will be sufficiently low and shaped so that a cyclist could cross it when the path is blocked, and more importantly will allow better use of the width than a full height kerb would allow.

The track will cross the three side roads on tables, so there should be no change of level. The Council officers were adamant that cyclists could not have priority across any of the side roads. After a ‘frank exchange of views’ as they say, what will be tried is a four-way give way (like that on the road at Stretten Avenue). This at least treats cyclists equitably with traffic on the side roads, even though they will not enjoy the same freedom of movement as they would on the road.

At Grange Road, visibility is very limited, so whatever the markings, cyclists will need to slow to walking pace in order to see approaching traffic in time. A traffic calming scheme may well be proposed for Grange Road next year, which may make a difference in the longer term.

There is also likely to be a light-controlled crossing installed at Grantchester Road to make it easier for people to join the cycle track from the south. This has been a particular problem to date for the large language school on the corner.

However, I think the most significant change here will be the installation of traffic lights at the Grantchester Street junction on the corner of Lammas Land, which will come out of a different budget. Provided the new cycle track is properly integrated with it, this should make crossing to and from Lammas Land much easier. Integration may be problematic, because different companies will be responsible for the design of the two schemes.

Construction has begun on a cycle lane and a shared-use footway on the road leading from the A14 to Histon. I am at a loss to know how the shared-use arose here, since the original plans showed cycle lanes on both sides, yet the Council says the plans had not changed since we were originally consulted. If you use that road, please can you let us have your comments on the new facility.

The new crossing on Huntingdon Road at Girton Corner, which we reported on last year, is now operating. This was mainly provided to make access easier for cyclists from the south heading for Girton College and Girton Village. As part of our representations, the originally proposed two-stage crossing with a cage in the middle and two waits was changed to a single stage crossing. Again, any feedback you have on this facility would be interesting. In particular, do the lights change promptly when you press the button?

Changes are imminent at this junction because of the extra traffic expected to be generated by the new Tesco store at Fulbourn, and a proposed business park on Fulbourn Road. The changes will be funded by Tesco, and will involve forward stop lines. It took several times of asking since November to get the plans for this junction, but we had sight of them in late March. We were sorry to see that the forward stop lines did not have proper approach lanes, and the ends of the shared-use footway on Cherry Hinton Road and Queen Edith’s Way were not integrated into the changes. We made these points in a letter to the County Council in early April. We have not yet received a reply, but indications from the Cycling Officer, John Richards, are that some alterations to the plans may be made.

You’ll have noticed that where cycle lanes cross side roads, red paint is being applied as normal practice now. However, a new departure can be seen at Trumpington Street and Pembroke Street, where the edges of the road have been painted red with a cycle symbol. In fact, these markings have no formal meaning at all – there is no cycle lane there, even advisory. I think the idea is to keep cars from edging out from the turnings and try to prevent cars in the car park queue (and those trying to get past it) from obstructing cyclists. What do you think about this? 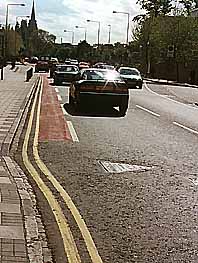 Other red paint has been appearing, extending approach lanes on East Road at the Mill Road lights, and the Newmarket Road and Ditton lane junction almost back to the Barnwell Road roundabout. I think this would be better still if there was a single lane off the roundabout forcing cars to cross the cycle lane, rather than cycles having to cross the path of the cars to reach the lane – exactly as the East Road arrangement. However, the extension is an improvement. 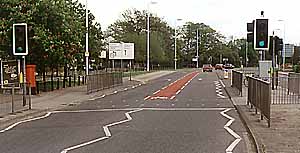 Red surface on Newmarket Road at the Ditton Lane junction

I haven’t yet found out where these changes are coming from within the County Council. I don’t know who is responsible for the Trumpington Street red paint or when or why it was approved.