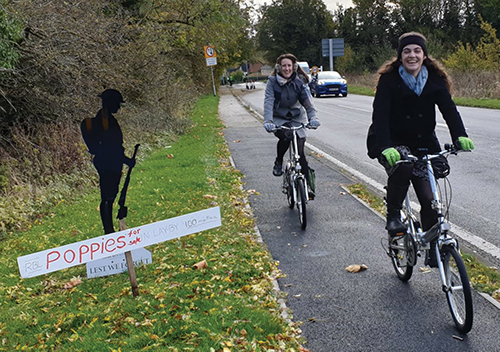 In early November, Roxanne and Anna saddled up on some pool bikes from Huntingdonshire District Council to ride to Alconbury with Cllr John Morris. The previous administration at the county council has been criticised for the location of its New Shire Hall building (and the closure of the nearby vocational training centre was attributed to a lack of sustainable transport options), but we wanted to prove that we take Camcycle’s values seriously and to have a tour of some of the highs and lows of Huntingdonshire cycle facilities on the way.

The reason for our journey was a meeting of the Highways & Transport Committee at which we raised questions on active travel schemes and Mill Road. We also continued to press for an inclusive new design for anti-terrorist restrictions on King’s Parade, stated our support for 20mph zones across the county, called for speed restrictions on the Busway path (see above) and urged the council to apply for civil enforcement of moving traffic contraventions under Part 6 of the Traffic Management Act for Cambridge.

Our final question concerned the A428 Black Cat to Caxton Gibbet scheme, which will attract and create higher levels of motor traffic while making many active travel trips more dangerous. We asked members to support officers in pressing National Highways for high-quality active travel infrastructure to be developed as part of this scheme, built and designed in line with Local Transport Note (LTN) 1/20 so it is safe and accessible for all users.