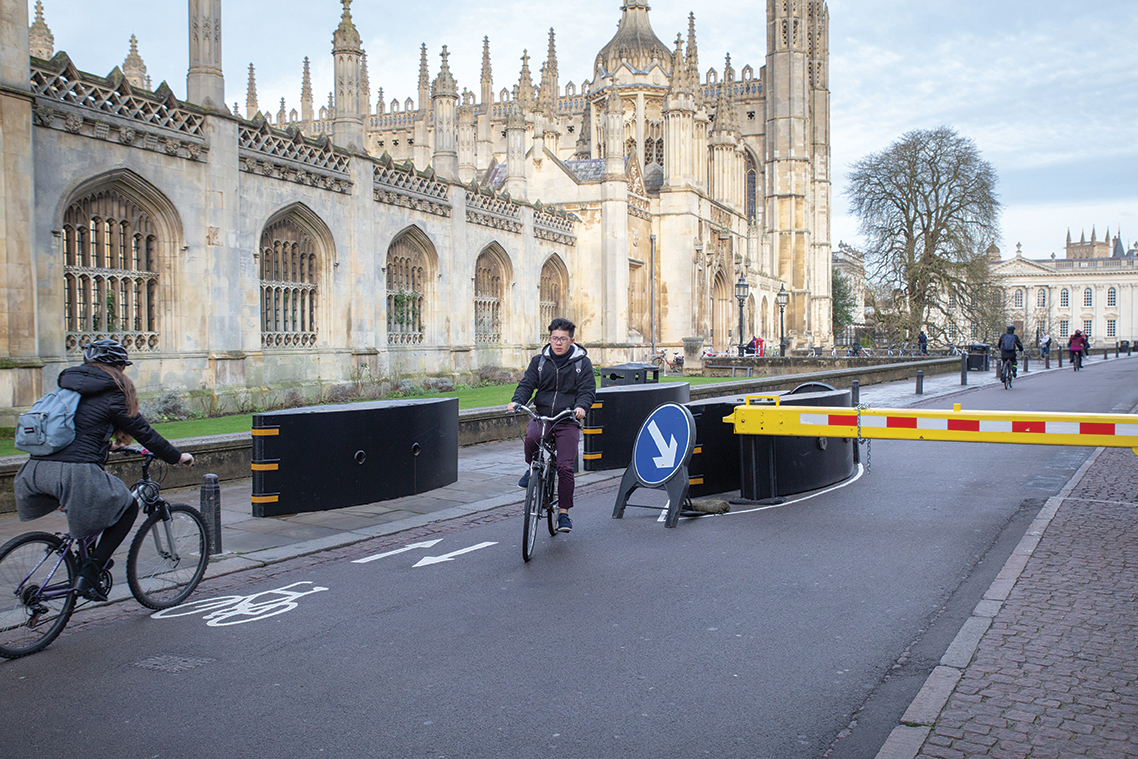 Earlier this week, Camcycle trustee Matthew Danish spoke to Cambridgeshire County Council‘s Highways and Transport Committee about the anti-terrorism barrier on King’s Parade (watch a video of the meeting here). In response, councillors agreed to a further review of safety, accessibility and design before daytime traffic restrictions are made permanent at the end of the year.

We’ve been raising concerns about the safety and accessibility of the barrier since March 2019 and, upon installation, were disappointed to see that the sole 1.2m gap was right against the kerb, with cobbles and a gutter on half its width. The barriers are operational between 9.30am and 7pm each day and restrict access to motor vehicles, but have also reduced space on one of the city’s busiest streets for cyclists and pedestrians, creating a dangerous conflict point for users.

Our objection this week reinstated many of the points we have previously made. We believe that the officer’s claim that ‘there has been little change in the level of personal injury accidents reported’ is an unsatisfactory response given that almost the entire period of the barrier trial has been spent battling a worldwide pandemic which has suppressed the usual flow of students, shoppers, commuters and tourists. The temporary barriers are not suitable for the circumstances in which thousands of students are rushing to lectures all at the same time without any alternative but to cycle on King’s Parade, in addition to all the residents and visitors trying to get around. We can see that the temporary barriers have already created conflict and that the particular arrangement of them severely reduces accessibility. Some people have told us that they have stopped using King’s Parade as a result of not feeling safe trying to pass through the small gap in the barrier, especially with cargo cycles.

King’s Parade is a heavily-used and well-loved public space at the heart of our city and, if a barrier is going to be made permanent, it deserves to have a really beautiful and practical design that is also safe and inclusive. It is entirely possible to balance the DfT’s imperative for inclusive cycling, LTN 1/20, with counterterrorism goals to create a workable solution for all. The pavements on both sides should be kept as clear as possible so that people walking or using wheelchairs or mobility scooters are fully accommodated. We recommend that, within the carriageway, there should be at least two gaps for cycling, northbound and southbound, each having sufficient clearance for cargo cycles, tricycles and disability-adapted cycles. The surface quality should be even and smooth within those gaps, instead of straddling the gutter.

The rising bollards that have been deemed suitable for the northern end of King’s Parade would be a fine solution at the southern end. But if that’s not enough, then we’d be happy to work with the officers to find a better solution as part of their next review.

Read the full text of our King’s Parade response here