A traffic law, due to come into force later this year, will give authorities new powers to better accommodate disabled drivers into their schemes. This will mean that measures designed to prioritise access for residents and those walking, cycling and travelling by bus can be tailored by councils with exemptions appropriate to each neighbourhood.

Although the Traffic Management Act was passed in 2004, some of the elements of Part 6 which allow the civil enforcement of moving traffic offences were not enabled outside London. Once this is rectified in December 2021, local councils can choose to exercise some powers that are currently the exclusive responsibility of the police. They will be able to use camera-based enforcement to keep bus and cycle lanes clear of parked cars and improve traffic flow at yellow-box junctions and at locations with banned turns. They will also have more flexibility when designing schemes to prioritise sustainable transport such as bus gates, School Streets (which help children walk and cycle to school safely) and other temporary or permanent traffic filters.

Camcycle has long campaigned for the full implementation of this act to improve the safety of cycle lanes. For example, before the recent changes (including installation of double yellow lines) on Downing Street, delivery drivers often blocked the cycleway throughout the day, causing danger and delay to other users of the narrow street. The new powers could make it possible to ensure that space for cycling – including mandatory cycle lanes and advanced stop boxes – is kept free for riders of all ages and abilities. 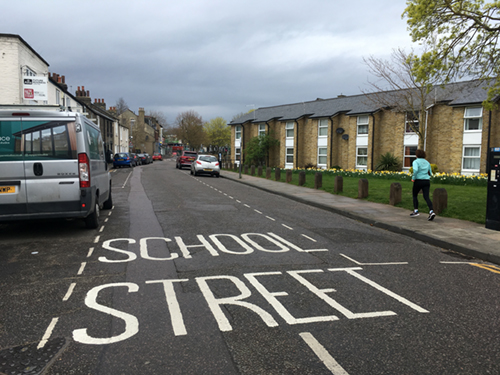 We also welcome the fact that Part 6 will give much-needed flexibility to councils and help them more successfully design traffic filters such as bus gates and School Streets in collaboration with local communities. Although we strongly supported the Mill Road scheme, we were one of the groups calling for improvements to access for those with disabilities. We believe this will be much easier to implement from December onwards. In fact, the low-traffic neighbourhood in Dulwich Village, London (where authorities already have the appropriate enforcement powers) was adapted in April this year to improve access for Blue Badge holders. Similar exemptions could be applied to forthcoming schemes in Cambridgeshire including those proposed for Arbury Road, Coldhams Lane and Rustat Road, and a new design for Mill Road based on the latest consultation with the community.

Evidence from London has also shown that enabling councils to enforce traffic offences has the benefit of a reduced workload for police. With cycle theft a major concern to many of our members and supporters, Camcycle welcomes the freeing up of police time for priorities other than local traffic management. We’ve waited 17 years for this part of the act to be enabled and welcome the benefits it will bring to road users across Cambridge.

The announcement of the enablement of Part 6 of the Traffic Management Act was trailed in June 2021 at the Traffex transport event and confirmed in Gear Change: One Year On, the government’s latest report on cycling, which was published in July.

Read one of our archive articles about the act in this article from Newsletter 101 (2012) by Jim Chisholm. Jim will be providing a follow-up piece in the next issue of our magazine.