Two schoolchildren were awarded prizes this week in a poster competition organised by Arbury Road East Residents Association (ARERA). The organisation, which represents the street’s community between North Cambridge Academy and the junction with Milton Road, invited young people to draw or paint their vision for a clean and safe Arbury Road. Many of the entries have been copied and displayed outside homes along the street to show support for a local campaign to improve the area. 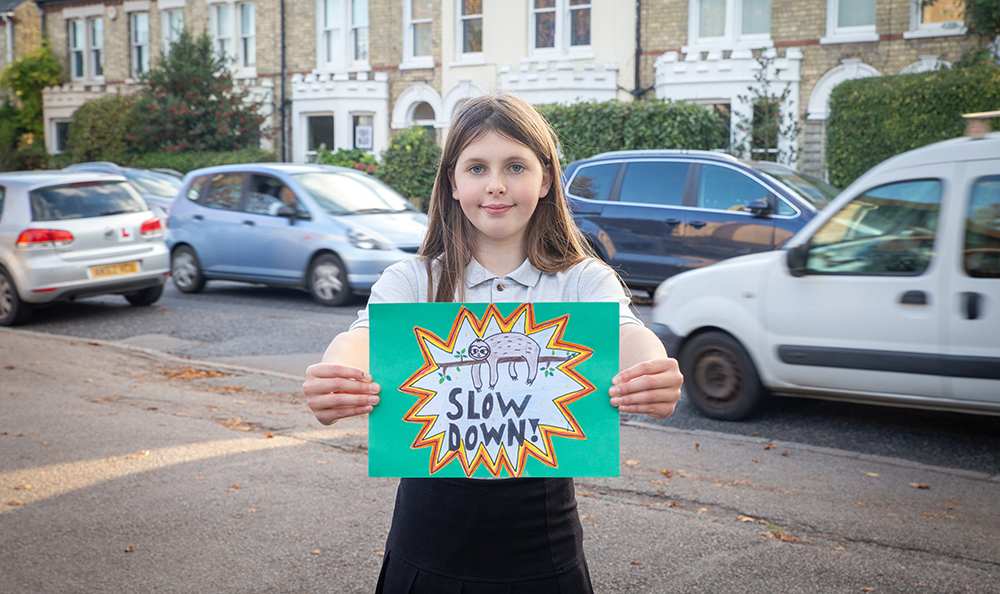 The winning designs were created by Elodie, age 11, and Mabel, age 15. Elodie’s sloth picture encouraged drivers to slow down in the residential neighbourhood, while Mabel’s poster features the hand-drawn headline ‘Make Arbury Road Clean and Safe’. It shows pollution from car traffic being replaced with a 20mph zone of trees, nature and cycling. 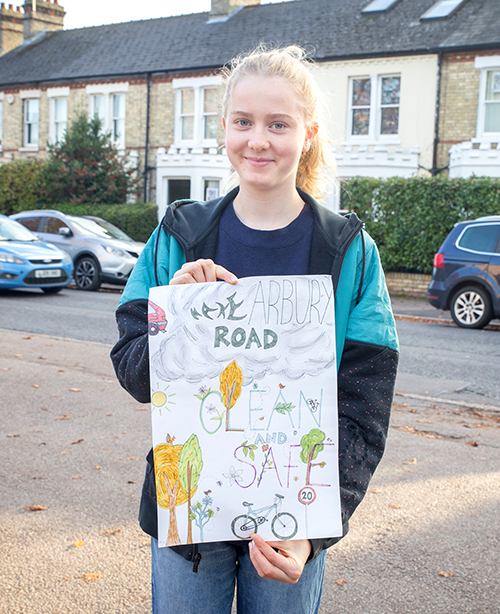 A survey carried out by the residents’ association last year showed that 87% of the residents and local business owners surveyed were unhappy with the traffic situation on Arbury Road. Among the many ideas generated in local meetings, a modal filter (or temporary measure to stop rat-running motor traffic) received the most support as the best way to improve safety, reduce pollution and encourage walking and cycling. The idea was taken up by Cambridgeshire County Council as part of its programme of Covid-19 active travel schemes and is hoped to be implemented in the next four to six weeks. ARERA believes a single modal filter would be placed in a location northwest of Leys Road and southeast of Arbury Court. The experiment would run for at least six months and local residents and road users would be consulted on whether to extend or change the scheme.

ARERA’s representative on cycling schemes, George Vardulakis, said more space for cycling and walking was now even more important during the pandemic, as people struggled to maintain safe distances from others on Arbury Road’s narrow pavements. He said:

A modal filter, if placed correctly on the road, would give a lot more space for the community to engage with one another and for cyclists to use the road safely. That includes schoolchildren making their way to the two schools on Arbury Road, residents and people visiting the shops – it would be a road for the locals rather than for A14 traffic. It will provide better access to people’s homes, with more provision for parking. With fewer queues, there will also be easier access for emergency vehicles. We hope this will transform Arbury Road into a safer and healthier street for everyone.

Prizes for the poster competition winners were awarded by ARERA’s Vice-Chair Lucy Edgeley in a small socially distanced ceremony outside Arbury Baptist Church on Tuesday 20 October. Mabel’s mother, Tracey Poole, said her daughter felt particularly strongly about the need for change as her bedroom faced onto the road and traffic noise often made it hard for her to study. She said:

We’ve lived here for nearly 15 years now and have just seen the traffic get worse and worse. It’s so heavy now, we have cars queuing for most of the day outside the window. We get the pollution, the noise and the speeding traffic is really oppressive – I don’t like my kids to cycle on the road because it’s just not safe. The traffic also divides the community – quite often you can’t stop and chat because you can’t hear each other. We’re really hoping to get the modal filter and feel excited that our road could be different. We’re grateful to our local councillor for getting behind it and look forward to a positive change for the road.

ARERA would like everyone who supports a modal filter to make clear to decision-makers their strong support for the scheme. You can do this by writing to local councillors, downloading and displaying one of the poster designs and signing the petition at change.org/arburyroadeast

Camcycle recently interviewed George Vardulakis as part of its Spaces to Breathe campaign for safe space for walking and cycling during the Covid-19 pandemic. Since the campaign was launched in April, we have encouraged individuals and community groups such as ARERA to put forward their ideas for places where more space is needed for those travelling on foot, by cycle or with a mobility aid. You can view the interview, along with other local people’s views on temporary active travel schemes on our YouTube channel and find out more about Spaces to Breathe at camcycle.org.uk/spacestobreathe