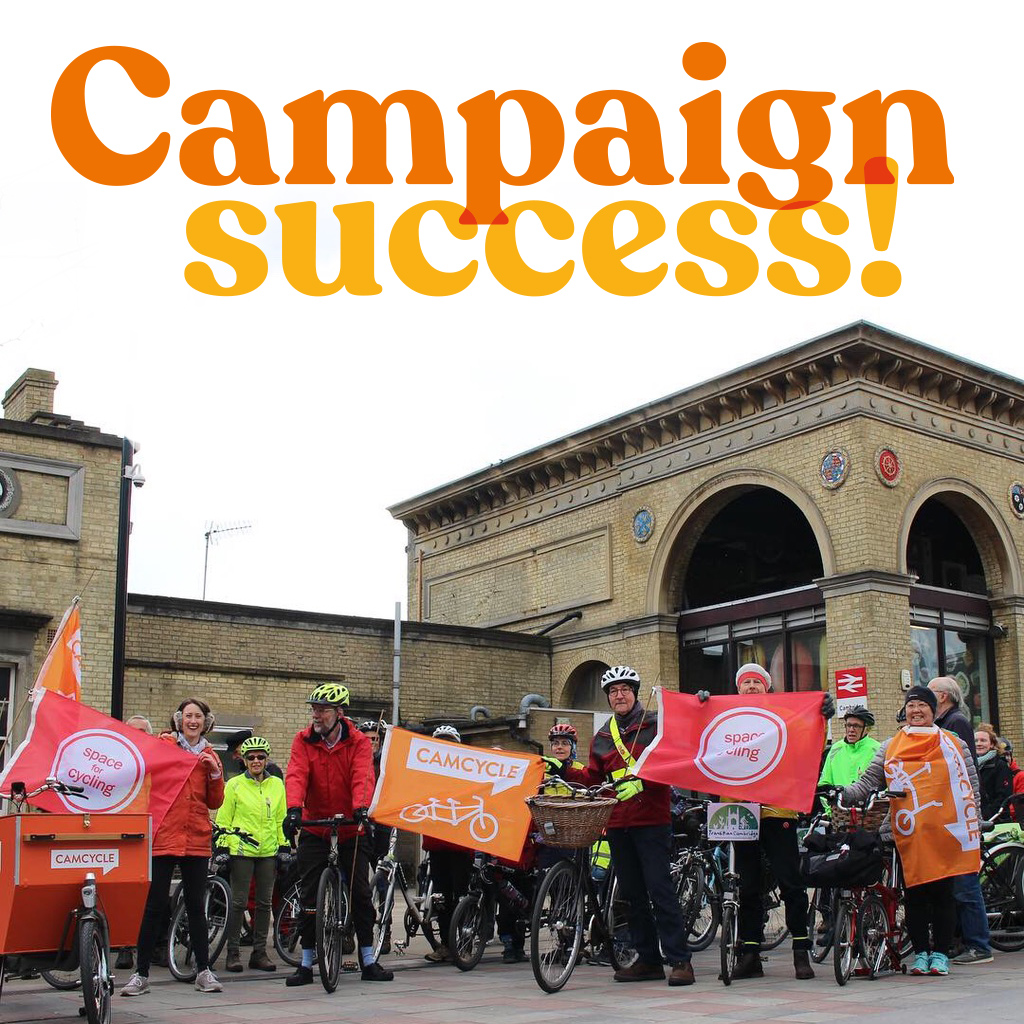 A major planning application for two proposed buildings at Cambridge station was refused today at the city council’s planning committee after over four years of campaigning by Camcycle and other local groups including Smarter Cambridge Transport and South Petersfield Residents Association. Councillors voted 5 to 2 to reject proposals put forward by Brookgate and Network Rail for offices, an aparthotel and a multi-storey car park in the area between Station Square and Devonshire Road. The plans would have removed space for a segregated route for the Chisholm Trail through the station area and threatened the safety of people walking and cycling around this important transport hub.

Although councillors acknowledged that the developer had made amendments to its previous application, they felt that their reasons for refusal still stood: the proposals failed to safeguard the Chisholm Trail as specified by the city council’s 2018 Local Plan and did not prioritise the needs and safety of vulnerable road users, including those walking and cycling. The size and scale of the building by the Devonshire Road cycle bridge would also detract from the character and appearance of the Mill Road Conservation Area.

In addition, they added that the proposals for development did not support the high-quality cycle infrastructure commensurate with Cambridge’s position as the UK’s leading cycling city and failed to abide by Local Transport Note (LTN) 1/20, the government’s latest guidance on cycle infrastructure design which was published on 27 July. The guidance supports the government’s aim “to make cycling and walking the natural choices for short journeys or as part of a longer journey” and emphasises the need for inclusive cycling design so that people of all ages and abilities are considered. Cllr Smart, the chair of the planning committee, mentioned that he had received many representations in advance of the meeting by people raising safety concerns for themselves, their children and their older relatives.

“We’d like to thank councillors for safeguarding the future of cycling and walking in the station area and speaking out so strongly in favour of preserving Cambridge’s position as the UK’s cycling capital. We’re delighted to see new government guidance on cycling being used already to assess developments and shape the city’s growth in an inclusive and sustainable manner which will benefit everyone who lives and works in the area. By applying LTN 1/20 members of the Planning Committee have set a significant precedent that we expect to influence future development and planning decisions in Cambridge and across England.

We’re grateful too to all the individuals and groups we have worked with on this campaign, who have shared their experiences, contributed ideas and written to their local councillors. We will continue to work for safe space for active travel around the station area where it is vital that we accommodate the huge volumes of people travelling through this area on foot or by cycle. We encourage local people to join us in calling for high-quality routes and better public spaces across the Greater Cambridge region. Today’s success should inspire everyone to take action for cleaner air, safer streets and a greener future.”

“We are delighted with the planning committee’s decision and urge Brookgate and Network Rail to meet with all stakeholders to discuss what the station area’s needs are over the long-term, as a sustainable transport hub, and as a place to live, work, shop and meet people. An alliance of local groups recently sent a letter to Jamie Burles, the managing director of Greater Anglia, which was co-signed by Daniel Zeichner MP, seven local councillors, and leaders of various community organisations and businesses. Now is the time to take up Mr Burles on his offer to meet with the local community. Together let’s come up with something much better for the area than the plans now rejected.”

Camcycle calls on all developers to consult with the organisation to make sure that cycling is successfully integrated into new proposals from the earliest stages and complies with local and national guidance. Plans should also acknowledge the need to address the climate emergency and local issues of congestion and air pollution. Cambridge already has high levels of cycle use but, with the political will shown today, could reach Dutch levels of cycling in the future. This would bring huge benefits to everyone in the area and the Chisholm Trail should be the flagship scheme of a connected network of high-quality cycle and walking routes suitable for all.