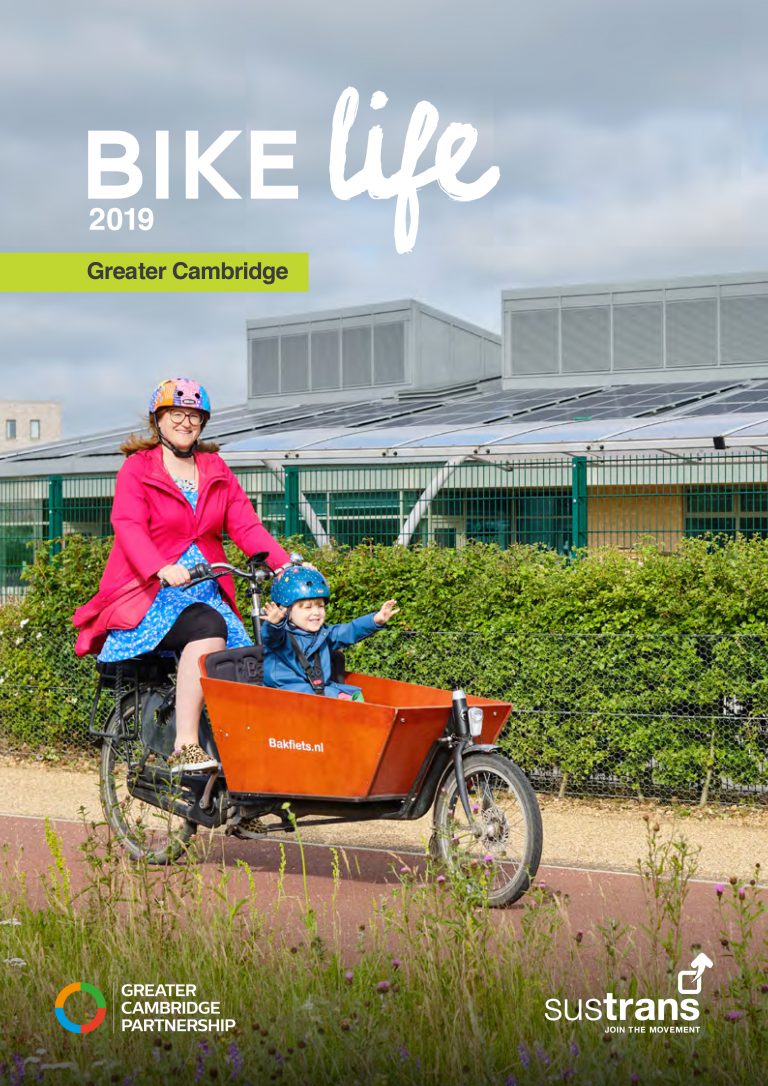 The Sustrans Bike Life report for Greater Cambridge, published on 4 March, shows that there is a high level of support for better cycling infrastructure in the area. Over 80% of residents surveyed agreed that more cycle tracks that were physically separated from both motor traffic and pedestrians would help them start cycling or cycle more. Three-quarters of respondents supported building more of these tracks along roads, even when this would mean less room for other traffic. This supports the conclusions of the Greater Cambridge Partnership’s Citizens’ Assembly, where over 90% of members were in favour of road space reallocation as a measure to tackle issues such as congestion and air quality.

The Bike Life report was produced by national charity Sustrans for the Greater Cambridge Partnership, in collaboration with Cambridgeshire County Council. It includes results from an attitudinal survey conducted in summer 2019 by independent social research organisation NatCen which gathered responses from a group of 1,403 residents aged 16 or above in the Greater Cambridge region. The survey is representative of all residents, not just those who cycle. It celebrates the progress made so far in and around the UK’s cycling capital where 48% of residents cycle at least once a week, but also shows the potential for growth: 15% of those surveyed don’t currently cycle, but would like to start.

Commenting on the launch of the report, Matt Barber, Sustrans’ Head of Partnerships for the Midlands and East region, said: “Greater Cambridge has the highest levels of cycling in the UK, with 29% of residents cycling five or more times a week. However, there is an appetite amongst residents to cycle even more. We urge the UK Government to show leadership and make a step-change in investment for cycling and walking. This must include protected cycle lanes and policies that support more people to switch from driving to walking and cycling for shorter journeys. This will help cities and towns to reduce car use and meet our national obligations under the Climate Change Act.”

The report reveals that, last year, cycling trips in Greater Cambridge saved 18,000 tonnes of greenhouse gas emissions and took 38,000 cars off roads in the area each day. Cycling in the region prevented 373 serious long-term health conditions each year, saving the NHS in Cambridge £2.4 million. Residents surveyed also recognised the benefit of improving streets for cycling and walking, with 67% agreeing that this would make their area a better place to live and work.

Roxanne De Beaux, Executive Director of local cycling charity Camcycle, said: “The statistics in this report back up what we already know about cycling in Greater Cambridge: we have a wonderful number of people who cycle from all backgrounds and age groups, but there are even more people who would like to cycle for some of their journeys. When we surveyed our members last year, we found that the main reason people support our work is because they believe increasing cycling is an important way to address issues such as congestion and air pollution and make the area a nicer place to live, work and travel in. This report gives us the evidence we need to continue to encourage local decision-makers to be bold and ambitious in their vision for the city region, creating a thriving and sustainable place of healthy, happy people.”

Cllr Aidan Van de Weyer, Chair of the Greater Cambridge Partnership, said: “Greater Cambridge is the UK’s leading cycling city region, with first-class cycling infrastructure, and plans are underway to make that network even better. I welcome the 2019 Bike Life report as an opportunity to show just how many people are cycling in our region – and how many more could start riding as we deliver some of our key cycling schemes. These projects will be part of a sustainable transport network that cuts congestion, improves air quality and provides reliable journeys for everyone.”

For more information about the Sustrans Bike Life report and to read and download the full document, visit https://www.sustrans.org.uk/bikelifegreatercambridge