To achieve more, better and safer cycling in and around Cambridge, investment in cycling infrastructure is essential. Safe, protected cycleways and cycle-friendly streets (achieved through methods such as reducing speeds and restricting motor traffic in residential areas) have proven time and again to be the solution which will both improve journeys for current cyclists and encourage more people to start cycling.

Investment can come from many areas including local authorities and developer contributions, but the large pot of funding on offer for the Greater Cambridge area from the government’s City Deal programme offers the best opportunity to revolutionise the way people travel in and around the city and address issues such as congestion and air pollution. The government is funding City Deals all around the UK, but the Greater Cambridge one, delivered by the Greater Cambridge Partnership (GCP), is the biggest in the country. Over £400 million is on offer for the next phase of the project (2020-2024) and we’d like to ensure as much as possible is given to cycling, which delivers an outstanding return on investment.

Therefore, lobbying for increased funding for cycling infrastructure from the GCP is a key part of our Cycling for All campaign which we are focusing on this autumn. We raised a question on funding at the GCP Joint Assembly on 12 September, asking for confirmation that cycling schemes such as Histon Road and the Cross-City Cycling links were part of a comprehensive cycle network that would connect up all areas of the city. In tranche 2 of the City Deal, we’d like to see investment in cycling at or above the levels seen in tranche 1 (around 20%) to continue to encourage more people to cycle for more journeys.

Power to the people 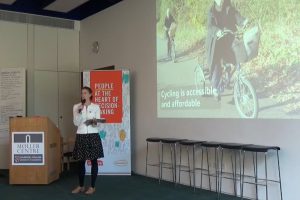 Our Executive Director, Roxanne De Beaux, was also invited to speak at the Greater Cambridge Partnership Citizens’ Assembly, in which members of the public are brought together to help solve the question: ‘How do we reduce congestion, improve air quality, and provide better public transport in Greater Cambridge?’ Roxanne was selected to give evidence as a transport expert following recommendations sent in by the public. She presented a vision of Cambridge as a cycling city with a safe and separated network that enabled more people to cycle – including the young, old and the mobility-impaired. Cycling would be made easier via direct routes, safe junctions and cycle-friendly streets. Driving would be discouraged through demand-management schemes, restrictions on access to residential streets and reduced car parking. Cycling would bring cleaner air, quieter streets and thriving businesses. She said, “Building a cycling city is probably the most effective transport option the GCP could pursue to realise their goal of shared prosperity and improved quality for life. For everyone that does cycle, everyone else will benefit.”

The Citizens’ Assembly is being held over two weekends in September and October. The first weekend focused on the impacts and the vision; the second one will discuss potential solutions. Again and again, cycling emerged as a key part of Greater Cambridge’s solution to issues of air quality, congestion and climate change. Lynne Miles, the GCP’s Interim Lead for Growth and Economy, said that 200,000 vehicles come into Cambridge each day and about 86% of these are cars. She showed the assembly that current congestion problems were not limited to traditional peak ‘rush-hour’ periods but extended across the day from 7am right through to 8pm. Stephen Kelly, Greater Cambridge’s Chief Planner, said that these pressures would only increase with current predicted growth: an extra 60,000 people are expected to live in Greater Cambridge by 2031, equivalent to the population of Taunton, Margate or Loughborough. When asked what needed to change, Lynne said, “Really a lot of people need to stop driving and start walking, cycling or taking public transport.”

A vision for the future 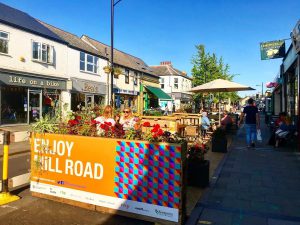 Visions and solutions presented included proposals for bus improvements, the CAM metro system and a fast transition to electric vehicles. Speakers included Edward Leigh from Smarter Cambridge Transport, Anne Miller from Carbon Neutral Cambridge and James Littlewood from Cambridge Past, Present and Future. A shared vision of the future was clear through presentations that included a photo of the Romsey Parklet and a celebration of reduced traffic on Bridge Street, which both came about thanks to our campaigning. Streets reclaimed from cars, a city for people, more space for cycling.

Greater Cambridge’s Transport Director, Peter Blake, explained that the city cannot just build its way out of the challenges it faces. Making public transport, walking and cycling better alternatives to the car would make the best use of the capacity and network we have and preserve the things people like about the Greater Cambridge area. He said, “To give more space to cyclists, we need to take space from other modes” and fundamentally change our approach to cycling. We can no longer paint a white line on the road and call it a cycleway. We must improve the whole cycling experience.

Rachel Aldred, Reader in Transport at Westminster University, showed that there was huge scope to change people’s transport behaviour, and quickly. The transition to a car-based society happened in just 15 years and cities like Seville show that cycling levels can be transformed in a similar time-period. For more than half of journeys between one and two miles in the UK, people still use a car. However, ‘propensity to cycle’ tools that demonstrate what could be achieved here based on Dutch levels of cycling show an inspiring vision for the future.

“What’s stopping these visions from being brought to reality?” asked one member of the assembly. “Political will”, agreed Anne Miller and James Littlewood. “That’s why it’s really important for [this citizens’ assembly] to stand up clearly,” said Anne. “Say yes, we want it and give our timid politicians the courage to get on with it.”