We’re preparing our evidence which will include a strong call to end the anti-social menace and hazard caused to people walking and cycling by pavement parking. 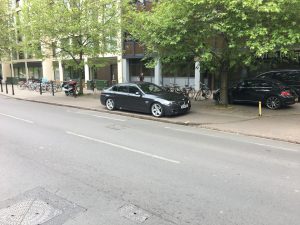 This car was parked on the pavement just 100m from the police station in Cambridge.

Cars on the pavement force people into the carriageway to go around the obstruction. For some people, that is a terrifying or nearly impossible experience, especially for people with partial sight or using wheelchairs. There is a confusing array of regulations that may or may not apply to each stretch of road, depending on highly technical details that the average person is not aware of.

When it comes to enforcing the law about obstruction, the local police appear uninterested and to lack a proper understanding of the law, perhaps because they perceive it as a trivial offence and they believe that they do not have the resources to deal with it. The offence is also hard to convict.

When there are yellow lines present, parking becomes a matter enforced under civil enforcement. This is entirely unclear. It makes no sense for parking attendants to be only allowed to deal with yellow lines but not to deal with the potentially more dangerous cases of pavement parking. Having two sets of officials with this overlapping task makes the entire situation highly unclear.

For vulnerable people, pavement parking is not trivial, it is a life-threatening danger that deserves more serious attention. When a driver mounts the pavement with a vehicle there is always the risk that a person, especially a child, may be walking there and the driver may injure or kill them. This happens far too many times per year: the only acceptable number is zero.

It is long past time for us to join the rest of the civilised world and ban the dangerous practice of parking cars on pavements, footways or cycleways. The confusing regulations must be sorted out and made simple and easy to enforce. The law must make it possible for civil enforcement officers to act, and for local authorities to expeditiously remove any offending vehicles using tow trucks.

We suggest that the DfT applies the same regulation as has been successfully present in London to the whole country. The experience in London shows that pavement parking can be controlled, uncontroversially.

It is that simple. What are you waiting for?

Submissions to the Pavement Parking call for evidence are welcomed from individuals as well as groups – find out how to submit your evidence here. You might also find it useful to see what other groups have to say – Cycle Sheffield have published their response and Sustrans’ clear policy paper is also useful.

The call for evidence closes Tuesday 15 May.