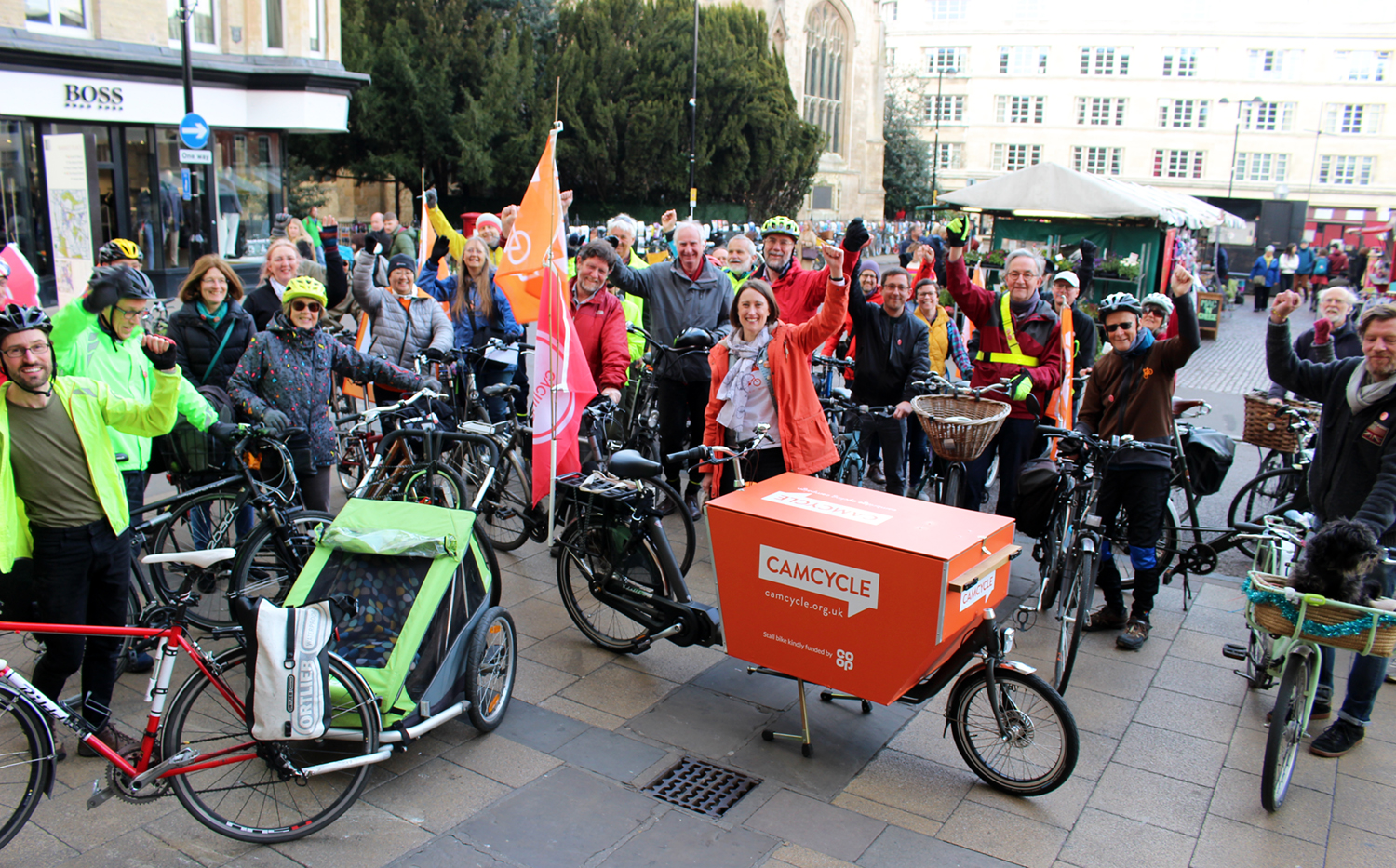 On Saturday 13 April, cycling charity Camcycle joined forces with other local environmental organisations including Transition Cambridge and Extinction Rebellion for Cambridge’s annual ‘Space for Cycling’ ride. A group of around 50 participants departed from outside the Guildhall to cycle along a route encompassing some of the areas where more space for cycling is needed, including Station Square and Mill Road.

The aim of the ride was to draw attention to the need for more, better and safer infrastructure for cycling, not only for those who currently travel by bike, but for those who would like to in the future. In a growing city, it is essential to increase levels of walking and cycling to address issues of air pollution and congestion and to meet local authorities’ commitments to tackling climate change. 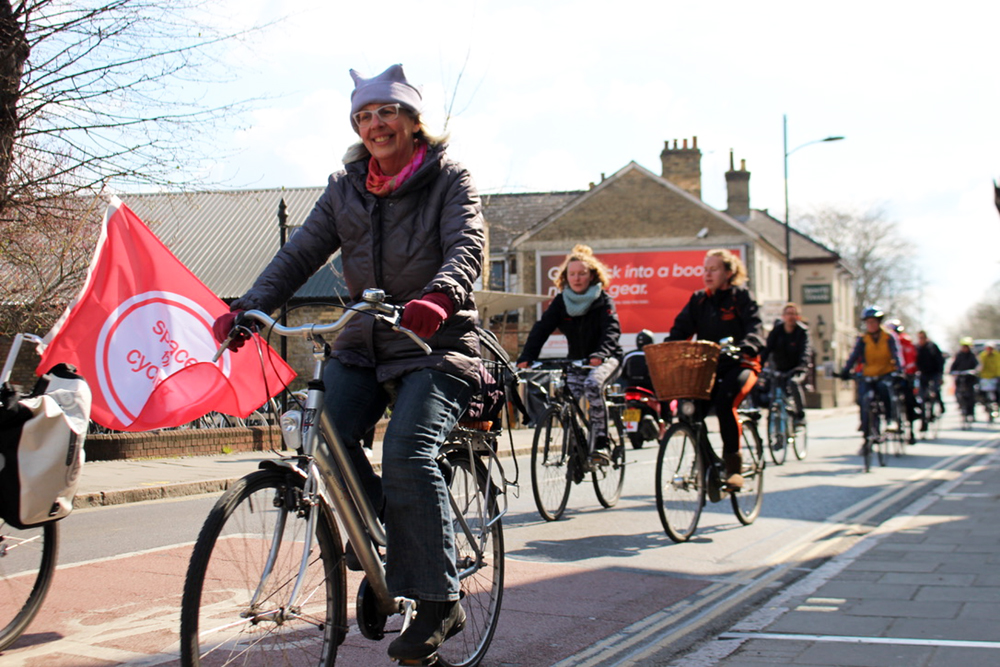 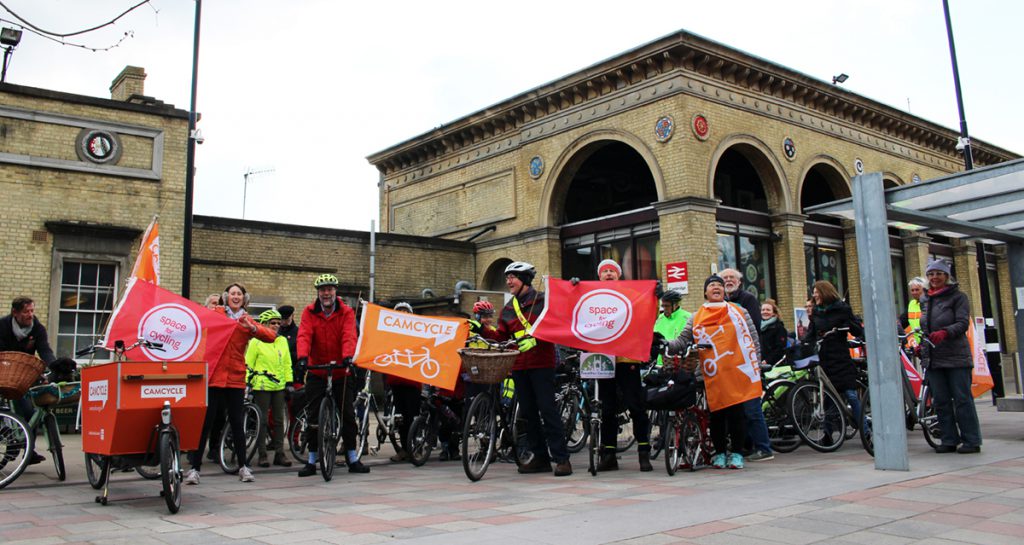 Participant Anna Langley from Cambridge said, “I’m on this ride because I believe that cycling is good for Cambridge, it’s good for our environment and good for the quality of life in our city. It’s really important we do this because we’ve got a climate catastrophe 12 years away. If we don’t do something about our emissions, we’re In real trouble and cycling is a really good way to deal with that. I think cycling is the transport of the future.”

Cambridge MP Daniel Zeichner joined the ride and spoke outside the Guildhall before the group of cyclists departed. He said, “I was in Walthamstow last week which is one of the boroughs in London which has adopted the so-called ‘Mini Holland’ approach. I was absolutely knocked out by the success of it, by the change it’s made not just for cyclists but in terms of strengthening the community, allowing our streets to be places where children are playing again, the environmental benefits, the health benefits. We know it makes sense, but to get more people cycling we also know that we need to make it safer and for people to feel safe when they’re cycling which is why Space for Cycling is such an important campaign.” 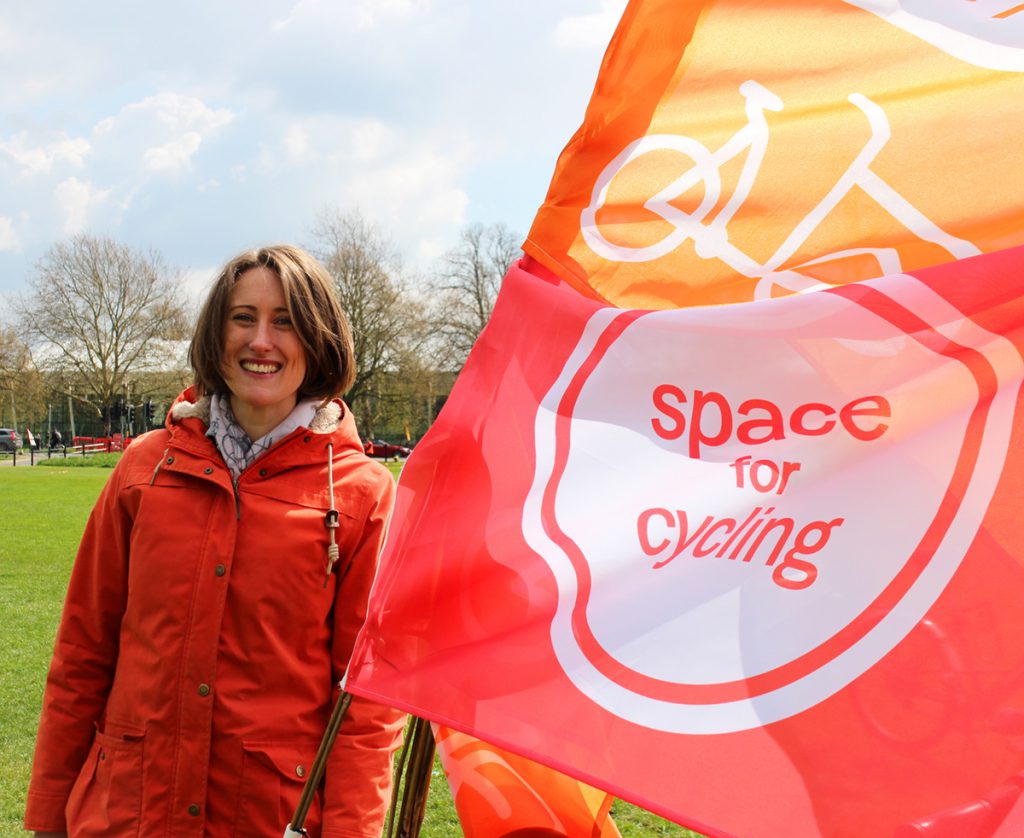 Camcycle’s Executive Director, Roxanne De Beaux, led the ride on Camcycle’s own electric cargo bike. She said, “We’ve had a great ride today with lots of support from passers-by. Clearly the community wants to see more space for cycling and it’s vital that our campaigning is supported by action from councillors and those standing as candidates in the local elections. It’s only by investing in safe cycling infrastructure that we will encourage more people to take to their bikes in the UK’s cycling capital.”

In addition to the Space for Cycling ride, Camcycle has released its annual list of questions for election candidates to find out what they think about improving provision for cycling in and around Cambridge. Question topics include tackling cycle theft, encouraging more people to cycle and improving the planning system to deliver safer streets and better facilities for those who cycle. The questions can be viewed on Camcycle’s website at www.camcycle.org.uk/elections. Responses from candidates will be released on Thursday 25 April. Camcycle encourages all those who care about the benefits cycling brings to the city to ‘Vote Bike’ at the elections on Thursday 2 May.