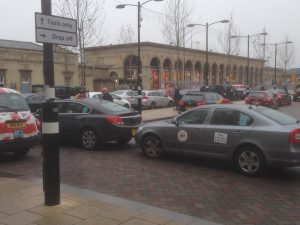 Brookgate has submitted plans for a new building and a multi-storey car park next to the station Cycle Point (18/1678/FUL). We’re submitting a petition to initiate a Development Control Forum to object to several problems with the plans. These include: lack of a clear, convenience and safe cycle route between Devonshire Road and the Guided Busway in the south, failure to fix outstanding safety problems in the Station Square and Great Northern Road, and obstructing the space needed to build an extension of the Cycle Point when it will be needed in a few years. We believe that the proposal undermines efforts to reduce air pollution and congestion at this central location because the proposed multi-storey car park will attract car drivers from miles around the area and because the proposals still put 10,000 daily motor vehicle movements on Great Northern Road in front of people’s homes.

You will need to set up an account with the City Council to sign this petition if you don’t already have one, but it won’t take long.