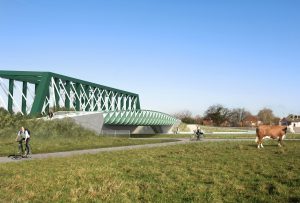 On Tuesday 4 December, the Greater Cambridge Partnership announced that a contractor had been appointed for the Chisholm Trail and work will begin on phase one of the project this month. The trail will eventually provide an almost traffic-free route between Milton Country Park in the north and Trumpington Meadows Country Park in the south. Along the way it will link to both existing Guided Busway paths as well as several of the proposed ‘Greenways‘ linking the city with surrounding villages.

The Chisholm Trail was first proposed by Camcycle trustee Jim Chisholm over 20 years ago, and was adopted as part of planning policy by the City Council in 2005. Jim shared the news with Camcycle members at the Camcycle monthly meeting. He said, “It is wonderful to know that work is starting in earnest. Planning permission was granted some 15 months ago but that still left agreements about flood risks, ecological compensation and mitigation, as well as land leases to be negotiated.”

Construction on the Abbey-Chesterton Bridge is due to start this month with work on a pedestrian and cycle underpass at Newmarket Road expected to begin in summer 2019. Phase two of the project will see the trail follow the railway line linking Cambridge Station to Coldhams Lane. The full trail is expected to be completed in 2020.

While the Chisholm Trail will help thousands of people who already cycle, the biggest winners will be people who would like to cycle but do not want to be forced to mix with heavy motor traffic. The Trail will offer a easy north/south route on a mixture of off-street paths and quiet roads with few cars.

As Jim points out, the trail will also provide a pleasant new route for pedestrians. He says, “I cycle mainly for ‘utility’ trips with my leisure activity normally being walking. This route will enable far more pleasant walking access between a number of valuable green spaces, and especially from Chesterton to Ditton Meadows and Coldham’s Common.”