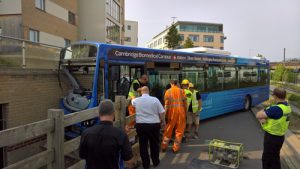 We're concerned about the number of derailments on the Busway and the danger that they cause to people using the cycling and walking facilities alongside. Camcycle Trustee, Jim Chisholm, recently wrote to the County Council Busway Team to express our concerns about the speed that buses are travelling on the Busway.

"Camcycle is concerned that unless a method is implemented to reduce the excessive speed of buses at ‘transition’ points or where limits are posted, a serious injury or even multiple fatalities will occur to those walking or cycling on the adjacent path.

We should make it clear that we recognise the benefits of the Cambridgeshire Guided Busway.

It seems highly likely that without excessive speed the most recent crash would not have occurred, and that the blame cannot be put on cycle riders as the posted speed limit on that section is 15mph.

The 15mph limit is there because it is ’shared-use’ with cycles and just a narrow footway. Those on cycles going south are forced to cross the path of buses going both South and North at a location where visibility is restricted. Buses going in either direction may need to overtake slower riders but must ensure that they give adequate space and that there is not a bus traveling in the opposite direction. ***This limit must be enforced***.

Technology to prevent such incidents is easy and cheap to install and is readily available. Dave Holladay, a cycling campaigner with Cycling UK specialising in bus and lorry safety issues has, I believe, raised issues with previous CGB incidents. For a number of years a ‘beacon’ based system has been available as an add-on for more modern buses.

Perhaps more appropriate, Transport for London has recently completed a trial of Intelligent Speed Assistance (ISA) and has now said that all new buses entering service will be so equipped.

On the RoadSafety GB site, there is an article about ISA on TfL buses, now over a year old, and with a comment by Dave Holladay. See:
http://www.roadsafetygb.org.uk/news/4971.html.
“All new buses across London are to be fitted with speed-limiting technology in a bid to improve road safety in the capital. “
The cost of equipping all buses using the CGB with such equipment would clearly be less than the costs, even just to the bus companies, of recent crashes.

Were previous, and this, incidents reported to HSE under RIDDOR, and if so what was the result? If not, why not? We find it odd that such crashes appear to fall outside both police investigation (RTAs), HSE and RIAB. This is County Council Property AND the public were endangered. Surely it must have required RIDDOR? If such a dangerous incident were to occur on a County Council depot it would require reporting, and would likely be investigated by HSE.

Given previous serious incidents we do not understand why so little action has been taken to prevent repeated crashes caused by excessive speed. Three (or is it four) ‘derailments’ clearly show that drivers cannot be relied on to moderate their speed.

We consider that as a matter of urgency all such buses must be so fitted with some sort of location aware speed limiter, with ideally a similar requirement for all new service buses.

If investigation of such previous incidents had been to Rail Accident Investigation Board standards all such buses would now be so equipped."