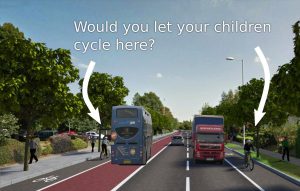 The Milton Road Alliance has launched a petition against the 'modified' City Deal plans that still squeeze out verges and cycle lanes.

You can also contact your local city and county councillors and let them know that you support trees and verges protecting people walking and cycling as shown in the original 'Do Optimum' plan!

There are also two meetings will determine the fate of Milton Road going forward: