Camcycle's 2016 AGM was held on the evening of Tuesday 6 December.

Before the start of the AGM attendees had time to network over tea and coffee and to purchase the new Camcycle greeting cards.

The AGM started with a presentation from guest speaker Brian Deegan from Transport for London who provided a tour of the many initiatives undertaken in recent years to enable London and the rest of the UK to implement Dutch-style infrastructure. It was very positive to see the direction being taken in London and the plans for the future that will truly create cycling infrastructure to enable safe mass-cycling. 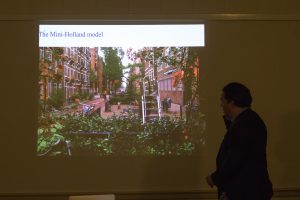 The official business of the AGM began with the Chair’s report by Robin Heydon. He provided a good summary of Camcycle’s 2016 achievements including the new branding as well as setting out the priorities for 2017 such as the creation of up-to-date policy papers. Monica Frisch, acting Treasurer, reported that the finances were in good order and that after a strong effort in 2016 the financial processes had been simplified, a new financial system implemented and the various treasury tasks spread over a financial subgroup. Sue Edwards provided the membership report. Camcycle membership is up from last year and most members are now subscribed at the new rates. The new membership system is helping with this and continues to improve.

Simon Nuttall presented his motion on street cycle parking and was able to use the example of the cycle parking installed on Thoday Street as a great example of what he hoped implementation of this motion could achieve. The motion was seconded by Al Storer and it was passed by 46 votes.

The election was then held with the submitted ballot papers being counted while enjoying a post-AGM catch-up at the Maypole.

A special welcome to our new trustees Chris Howell (retuning to the board after several years’ hiatus), Matthew Danish, Willa McDonald and Franny Ritchie.

We also thank outgoing trustees John Hall and Roos Eichenberger for their contributions.

As always we must acknowledge and thank all of our volunteers, members and supporters who have helped us to campaign for more, better and safer cycling in 2016. With your ongoing support we hope to deliver an even more successful 2017.