We have submitted our response to the Abbey-Chesterton bridge planning application and expressed our strong support for both the bridge design and location. Read our response in full: 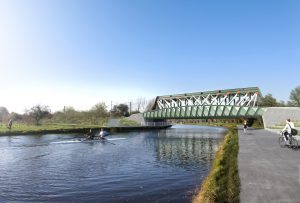 Cambridge Cycling Campaign welcomes the submission of a planning application for the Abbey- Chesterton foot and cycle bridge.

We strongly support both the location and the design.

The Campaign first proposed a bridge in this area as long ago as 1998, and we were pleased to see such a link included over 10 years ago in the Local Plan.

As just a link between Abbey Ward and Cambridge Science Park, or between King’s Hedges and Marshalls, this bridge would have had great value in reducing the need for private car travel by providing a quicker, more reliable and pleasant option for local commuting.

Recent and proposed developments in this area, including Cambridge Business Park, Cambridge North station, the Wing development, the new Ice Rink, together with the huge employment potential of the proposed Cambridge Northern Fringe (East), make this bridge essential as part of a sustainable transport policy for Cambridge and South Cambridgeshire.

Without this bridge there will be many more private car trips on the already congested roads in this area. In addition, other cycle and walking routes will become increasingly congested, with the Green Dragon Bridge then needing a major rebuild with associated huge disruption and change to character of the area. This bridge, which is severely substandard for a combined foot and cycle bridge, already carries over 3,500 trips per day.

With the bridge, and the Chisholm Trail, there will be many more opportunities for cycling and walking trips, be they for leisure or utility purposes.

Cycling trips from Milton to the Cambridge Biomedical Campus will become quicker and more pleasant than by car, as will such trips from Trumpington to the Science Park. Such trips will be well within the capabilities of an average person, providing a good way to fit exercise into a daily routine, and can avoid all main roads. This means that even those without the confidence or skills to ride on busy roads will have an option to leave the car at home for their daily commuter trip.

We do understand the concerns of a few that this will urbanise the area and cause damage to habitats of flora and fauna. If the main construction access and work site had been, as originally suggested, on Ditton Meadows this would have been so. Constructing the bridge on the small triangle of Network Rail land north of the river with the other access on the edge of the meadows adjacent to the railway embankment vastly reduces such problems, as does the proposal to have the works base away from the meadows.

We note that the Landscape and Visual Impact Assessment states that although there will inevitably be disturbance during the construction phase, in the longer term” there will be no significant effects to any of the landscape and visual receptors”. The Design and Access Statement makes it clear that considerable thought has gone into minimising the impact of the bridge and access ramps on the landscape, habitats and flora and fauna of the area, which we welcome.

We also hope that the proposals in the planning application for Phase One of the Chisholm Trail, as submitted for extending the open space on the edge of Ditton Meadows by including both parts of the old railway sidings (currently still ‘operational’ rail land!) and Barnwell Wood (currently frequented by rough sleepers with consequent debris) will far more than mitigate for the loss caused by small increases of hard surface in the area.

The proposals, shown on the site plan, to make changes to the jetty route beneath the adjacent railway bridge connecting Stourbridge Common and Ditton Meadows are also welcome. We would have liked a far wider route here, but the proposal to ‘cant’ out the parapet/handrail will create a greater effective width. We especially welcome changes to the alignment throughout the length and widening of the approaches. This will remove the sharp turns with restricted width and visibility and hence reduce the conflicts that commonly occur at this location.

This bridge and the detailing of landscaping with ramps, steps and seating should be welcomed as an addition to the Cambridge scene. It will be especially welcomed at the Cambridge ‘Bumps’, that traditional series of boat races (both Town and Gown), as providing both improved access and better viewing during those weeks.

We cannot overemphasise our support for this project. There will be huge gains in accessibility for a rapidly expanding part of Cambridge, that will benefit utility trips by providing a good alternative to the private car, and will be quicker, more reliable, healthy, and cheaper. It will also give better leisure access to the good and often undervalued open space of Ditton Meadows, as well as, with the Chisholm Trail, little-known gems such as the Leper Chapel, and will improve access to Coldham’s Common for those in Chesterton and King’s Hedges with little nearby informal open space.

This project should give good value for money by vastly improving the options for sustainable travel and improving access to green space within Cambridge.