More than 700 people of all ages and abilities participated in the 10th annual Reach Ride, riding from Cambridge to the Reach Fair and back again along a picturesque route of 14 miles each way.

The ride was opened at Guildhall by Councillor Noel Kavanagh, the Cycling Champion for the Cambridgeshire County Council, who thanked volunteer Simon Nuttall for his leadership of the event over the last ten years. 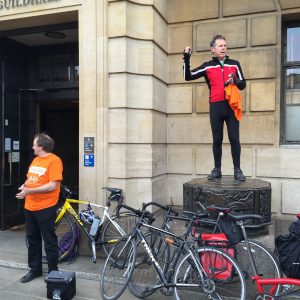 Despite forecasts of heavy rain in the afternoon, the 718 participants enjoyed great weather during the ride and at the Fair, with only a few mild showers on the way home.

This annual event is organised by Cambridge Cycling Campaign who were this year supported by Outspoken Delivery and Bike Week and sponsored by the City Council with funding from the Cycling and Walking Promotion Grant.

The Reach Ride also saw the first outing of the new branding for Cambridge Cycling Campaign. Volunteers for the charity, which campaigns for more, better and safer cycling in and around Cambridge, were seen wearing bright orange T-shirts with new “CamCycle” branding including a selection of “hero-cycles” that represent the diversity of cycling in Cambridge. The Campaign has long been known as “CamCycle” due to the popular Twitter account and to avoid confusion with various other organisations abbreviated to CCC. 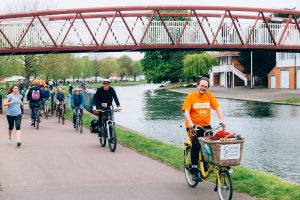