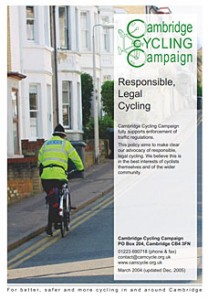 In Cambridgeshire County Council's Cabinet meeting on 18 December, several new cycling schemes were given the go-ahead, and several councillors welcomed our work, for which we thank them. But the leader of the Council, Nick Clarke, apparently went out of his way to criticise "the cycling campaign" for supposedly defending cycling through red lights, something which we have never done. Indeed, we have long taken exactly the balanced approach to road behaviour that Clarke himself was advocating, so his remarks are all the more puzzling. We have published a response pointing out the work we have done in promoting more considerate cycling and road use in general.

Cllr Clarke reportedly said: “There seems to be a continuing discussion between cyclists and car drivers about who is right and who is wrong, who gets in the way of who and who doesn’t. Surely it’s got to be time for society to take a mature approach to this. Everybody on our roads has to be more considerate.In order to that, car drivers have got to think before they turn left at traffic lights and cyclists have got to play their part and give us a chance by having lights on and not going through red lights.If this gets raised the wrath of god from the cycling campaign descends on us. What we need is considerate, safe drivers of all vehicles on our roads so we can further drive down accidents.”

We find nothing to disagree with in Cllr Clarke's preamble. We are therefore puzzled by his critical remarks that "if this [cycling  through red lights] gets raised the wrath of god from the cycling campaign descends on us". We have never said or suggested that we support this hazardous behaviour, or indeed other reckless behaviour on the road.

On the contrary, we have consistently called for exactly the kind of balanced approach that he is now asking for: he will find long-standing written policy on this on our website which he could have looked at before accusing us of defending law-breaking cycling.

Indeed, we have punched above our weight in trying to deal with issues like cycling without lights: our poster on what is required is displayed widely in workplaces around Cambridge and has been adopted for wider use around the country, even by police forces!

We have liaised with Cambridgeshire police over their recent initiatives on lights and sent Councillor Clarke personally a copy of our article supporting it. A second edition of our 'where you can and can't cycle in the city centre' map is in preparation; the first edition went to every home in Cambridgeshire, most students, and confused police officers!

We look forward to continued dialogue with the County Council on how to deal with anti-social road use in general.