As most of you will know, the redevelopment of the station area (‘CB1’) includes a cycle park in the same building as the multi-storey car park, to go alongside platform 6 in what is currently the main surface car park. The intention was originally for this to be funded out of the development. However, the original developers, Ashwell, went bust and resurrected themselves as Brookgate, and this funding was in doubt. It has been unclear to us for a while what the status of the cycle park actually is. 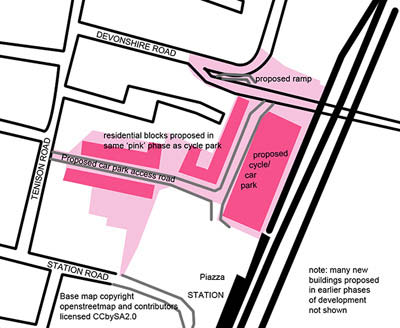 A Freedom of Information Act request, the result of which was kindly forwarded to us, clarifies the situation. Though it is still a long way off, this so-called Section 106 agreement from April 2010 (that is the agreement the developer enters into to pay for or provide public infrastructure) makes it clear that the cycle park is still a key part of the development and that the private development at the northern end of the site cannot proceed without it. The development is also contingent on providing better access off the cycle bridge into the station.

Apart from the time scale, this is largely excellent news. Quite why everyone seems to have been prevaricating over its status is a mystery when it is set out so clearly in this document.[1] 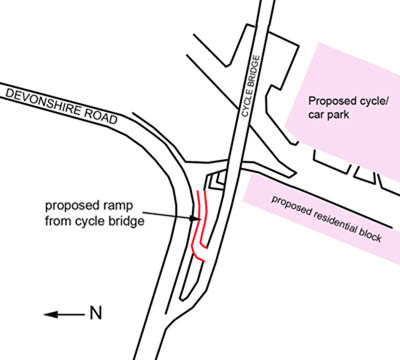 A new ramp off the cycle bridge is also provided for, in a more straightforward agreement between the developers, the County Council and Network Rail,[2] but again starting construction and building occupation is dependent on the ramp being started and completed. The ramp isn’t ideal – it should run south off the bridge. It will loop around and under, just north of the bridge. But it will remove the need to make two right turns onto and off Devonshire Road to get into the station.

Despite an agreement, there is still scope for things to go wrong, of course. If the company went into liquidation again, they could start from scratch and renegotiate pleading poverty. And it is not unknown for Section 106 provisions to just be ignored and not enforced. The planning application or approval might not live up to expectations. Nevertheless, it seems that by 2020 we might actually have enough cycle parking at the station at long last.

Nine years is a long, long time to wait given the desperate overcrowding that has existed for years.

There is some good news on the horizon, however. When the bus stops move around the corner onto the new road in a few weeks time, the concrete area where the buses stop now will be vacant. The plan is to put quite a few new racks here.

However, this is still just sticking plaster on an open sore. Therefore we have taken advantage of the new fixmytransport web site (see previous article) to start an online campaign to try to bring things forward or get more spaces in the shorter term. Do add your name as a supporter, at www.camcycle.org.uk/jumpto/nl98station