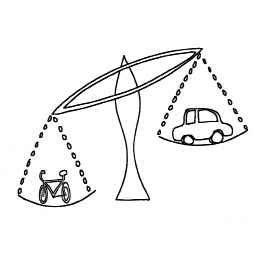 Councils around the country are, it cannot have escaped anyone’s attention, making cuts to transport and other services owing to a fall in government funding. In Cambridgeshire, the County Council’s cabinet has decided that many of these cuts will be to subsidies for rural bus services.

Separately, the government announced a new funding source, the Local Sustainable Transport Fund (LSTF), which replaces a set of other initiatives, not least Cycling England, whose closure we campaigned against (see Newsletter 92). It is a fund of £560m over four years for a variety of sustainable transport initiatives and cycling will have to fight its corner. However, this is likely to mean only £5m or so for Cambridge, given the number of local authorities. So this money will not go terribly far. Certainly by continental standards it is a pathetic level of funding.

According to the Department for Transport:

‘It [the Local Sustainable Transport Fund] will challenge local transport authorities outside London to develop packages of measures that support economic growth and reduce carbon in their communities as well as delivering cleaner environments, improved safety and increased levels of physical activity. Measures could include encouraging walking and cycling, initiatives to improve integration between travel modes and end-to-end journey experiences, better public transport and improved traffic management schemes.’

It seems to us that the bid is not designed simply to take up the slack from grant cuts elsewhere. As the quote above makes clear, cycling is far more closely related to the intention of the scheme.

While it is intolerable that sustainable transport campaigners are having to ‘fight their corner’ because of the cuts, those cuts do reflect the political priorities of ruling County Councillors

It is thus worrying to discover, at a recent meeting attended by our planning consultant, that the County Council seems to be heading towards a bid to the LSTF which simply attempts to replace the cut bus services rather than implement measures of the kind above, i.e. buses not bikes.

There is a real danger that Cambridgeshire will make a bid that fails to include cycling, either in any meaningful way or even at all. In doing so, and bidding for bus replacement funds instead, it runs the risk of failing to get any money at all. Yet investments in cycling can benefit many more people.

Moreover, cycling is much better matched than bus replacement to the two key objectives of the scheme: supporting economic growth (which cycling does through aiding much more efficient transport networks – imagine a ‘no cycling day’ – Cambridge would grind to a halt), and reduce CO2 emissions (which mostly-empty rural buses do not substantially contribute to).

Whilst it is intolerable that sustainable transport campaigners are being put in the position of each having to ‘fight their corner’ because of the cuts, those cuts do reflect the political priorities of the ruling County Councillors.

By the time you read this, we will have published a major new report, Cambridge Cycle Vision, which outlines the main cycling schemes that are sorely needed in the area and reviews the progress that has been made over the last three years thanks to the Cycling Demonstration Town status and other funding such as Section 106 (development) funding. Each of the schemes we outline will get more people cycling, more safely more often, in the words of Cycling England (RIP).

Another key theme running through the guidance is the requirement for partnership working. The Campaign’s history of working with the County Council – when it does the right thing (and not when it does not) – should put a cycling-led bid in a good position to be successful.

Our new report should remind the County Council that there is much to be done, and we hope it will use this document as the basis for a strong, cycling-led bid, at least for the Greater Cambridge area if not beyond.