On a cold Thursday in March a band of volunteers from the Campaign worked long hours counting both bikes being parked and those being taken through the barriers at Cambridge Station.

We undertook this survey, with the kind permission of National Express, to highlight both the current problems of cycle parking and those problems likely to occur if the access to the new island platform is not, as seems possible, designed to appropriate standards. 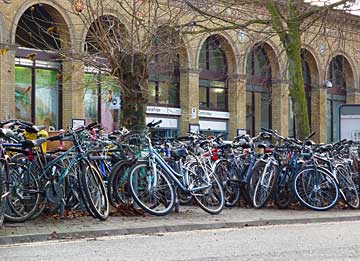 The headline figures for that day are:

Other interesting facts were:

This shows the significant numbers of bikes used for inward commuting to Cambridge, either bringing a bike for the whole trip or collecting a bike left in the cycle racks overnight. Obviously, large numbers use folding bikes to avoid peak hour restrictions on the carriage of non-folding bikes.

Could this survey be improved next time we do it?

Yes. Although counting bikes through the barriers was relatively simple, it was difficult to count the bikes being parked and removed. This was especially so in the dark evening, and more so for bikes being removed following arrival of peak-time trains, when hundreds of pedestrians swept from the station in all directions, with some collecting bikes from any of several bike parking areas. A probable measure of our failure is that we counted 932 bikes being parked yet only 751 being removed. Even the ‘parked’ figure must be a low estimate as we couldn’t attempt to cover one smaller area of cycle parking or a number of ‘fly’ parking locations. Hence my headline figure of 1,000 bikes parked.

A number of volunteers suggested ways to improve the accuracy of cycle parking counts, but this means next time we’ll need even more volunteers!

We understand that work is ongoing between several parties to provide short-term improvements to the number of racks as well as further culls of abandoned cycles.

Will disaster strike at Cambridge Station?

Cambridge Station is due to have an island platform (see Newsletter 89) open as early as December 2011. Although initially few trains may use it, when Chesterton station opens and when larger numbers of London-bound trains become 12 cars, it can be expected that at least a third of trips will involve the use of a new over-bridge.

In a report to County Council Cabinet (April 27) a council officer has said:

It is the understanding of Cambridgeshire County Council and Cambridge City Council that the design of the Island Platform at Cambridge proposes use of ‘off the shelf’ designs for the bridge and lifts. It is similarly understood that these standard designs have very limited capacity for cycles. This is inappropriate, as there will be a demand for many hundreds of cycles a day to use the stairs, lifts and bridge.

While the Island Platform is supported and the urgency of its delivery is appreciated, this should not result in the wrong platform access solution being delivered. Network Rail should be required to address this issue as a matter of urgency. Any influence that can be brought to avoid the inevitable congestion and resulting complaints from station users that will occur if the Island Platform is implemented with inadequate cycle access should be used. The Cambridgeshire authorities request that this point is drawn to the attention of franchise bidders.

Linked to this point is the available land to the east of the railway at Cambridge station that was secured in a planning agreement. This land was secured in order to facilitate the provision of a future bridge which could further improve accessibility of the station. Ideally, such a bridge should be provided with the island platform. If this is not possible, the design of the platform and its access should be compatible with its future delivery.

In reply, Network Rail have told the media:

The proposed footbridge connecting the new island platform at Cambridge station will use a modular design, of the kind used at dozens of stations across the country, and will include lifts serving all platforms, which can accommodate up to 16 people at a time.

Between the lifts and the new footbridge, passengers at Cambridge station including those with bikes, pushchairs or heavy luggage, will be well catered for.

I have been told that the internal dimensions of the lift will be 1.6 m x 1.6 m. The capacity of a lift is drastically reduced when even a single cycle has to be placed diagonally. In addition it has been suggested that the width of the stairs will be 2.0 m between handrails.

Cambridge is one of the 40 busiest stations in the UK, and has, at eight million footfalls (entries, exits and interchanges) per annum, five times the passenger flows of any of the ‘modular’ stations, existing or proposed, that I’ve discovered.

In addition, such stations tend to have the clear tidal flow of small commuter ones, making passenger flows far more simple. Together with the single entrance, and 1,200 bike movements, this would make a testing case for those with stochastic models of passenger flow in station environments. (Several do exist and have been used before major changes at other stations.) Has Network Rail taken such a step or will it, with passengers and cyclists, stumble in the future?