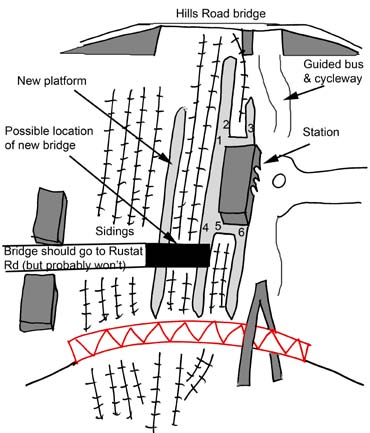 We’ve made good progress on some shorter-term issues at the station. Both the Campaign and the County Cycling Officers have had meetings with the recently appointed station manager at Cambridge, and there is obviously willingness on all sides to attempt to improve the lot of those who cycle. Clearly abandoned bikes have been tagged, and numbers have been removed. We’ve had reports that finding spaces is no longer almost impossible. The intention is that in future OWL Bikes of Sawston will undertake a more regular cull of such abandoned bikes. It is also expected that in the short term some extra stands will be installed, giving perhaps another 50 spaces. There may be the opportunity for more stands when the hoarding surrounding the current guided bus works is removed. We also reached an agreement with National Express to do a survey of cycle use and cycle parking – see the next Newsletter for results.

More information about the island platform has become public, but we’ve so far failed to get answers to our specific questions through official channels. The popular RAIL magazine has had an article on ‘Transforming West Anglia’ which includes some useful and interesting items:

The first two items should mean that constructing an access to Rustat Road will be both easier and more desirable. We shall continue to work to find information on this project, and hope that, in the end, sensible decisions will be made that improve the accessibility for sustainable transport in Cambridge.

Regarding the proposed developments that gained planning permission a while ago, we have serious concerns that these may not go ahead on a sensible timescale, or with sensible funding arrangements. This, of course, includes the large cycle park.