Regards the comments reported in the article The Things People Say, number 2 (Newsletter 42) – e.g. motorists indicating that cycle lanes should be mandatory where provided.

I would like to point out to motorists that cycle lanes marked with a continuous white line are properly termed mandatory but this applies to the motorist, not the cyclist. This means that vehicles should not be parked in the cycle lane or incur a £20 fine. I expect that this legal restriction also applies to moving traffic as well [it does – Ed].

It’s good that the council provide cycle lanes but when are the authorities going to properly enforce mandatory cycle lanes and make some examples of those motorists who seem to regard them as convenient parking space and, worse still, as inside lanes provided for the purpose of overtaking right turning traffic?

The whole point of cycle lanes is to keep vehicles and cyclists separate so that oversight by either party is less likely to result in injury.

Yes, dear motorist, we know you always check for cyclists before using the cycle lane but these lanes are provided for the times that you (or the cyclist) make a mistake – if you treat cycle lanes as optional road space then the whole point of having cycle lanes is undermined and we may as well scrap cycle lanes and instead rely on your perfect vigilance to protect us from injury.

After many years as a Cambridge motorist, cyclist and pedestrian I have yet to see the police, traffic warden or other authorities take action on a vehicle parked in a cycle lane – a blind eye approach seems to be the norm here.

Perhaps it is frustrating for motorists when cyclists choose not to use cycle lanes but if we are going to get into these ‘waters’ then let’s first deal with the issues of motorists driving in cycle lanes which seems to be the more common and serious transgression.

I note reference in Newsletter 43 to abuse of the bus/cycle lanes on Shelford Road which I echo as I cycle from Sawston to Cambridge every day. I have never seen any police presence. How many prosecutions are there each year for abuse of bus/cycle lanes? 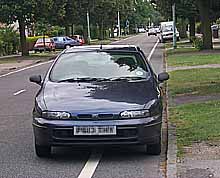 ‘When are the authorities going to properly enforce mandatory cycle lanes and make some examples of those motorists who seem to regard them as convenient parking space?’

Newsletter 43 elevates David Earl’s article against the wearing of helmets to second feature, giving the impression that this irresponsible diatribe represents the organisation’s considered view. If this is the case, many will think that the Campaign has abdicated any claim to represent the responsible voice of cyclists in this city.

He admits that his arguments offer ‘no comfort to individual victims of crashes’. Society is made up of such individuals, and I for one know of at least two people who would have been alive now had they been wearing helmets at the time of their accident. Perhaps he would like to address his comments to their parents.

Against all the evidence, he seems to suggest that not wearing helmets actually makes cycling safer. The last figures I saw were that 75% of fatalities are caused by head injuries and 80% of these would have been a lesser injury had the cyclist been wearing a helmet. If this is not conclusive evidence, what is?

Most of us can remember when motorists resisted the introduction of seat belts, using the same specious arguments that David Earl now grinds out.

The debate over whether helmets should be made more generally compulsory is still open and rational debate is welcome. In the meantime, Stephen Norris may resist ‘dressing up as a spaceman.’ For my part, in advancing years, I may not have much left between my ears, but I will take sensible action to protect what is there.

In my opinion Cambridge cyclists would be wise to read much the most detailed article on cycle injuries in Cambridge before deciding not to wear a helmet. This is ‘Injury patterns in cyclists attending an accident and emergency department: a comparison of helmet wearers and non-wearers’ by C Maimaris, C L Summer, C Browning and C R Palmer published in the BMJ on 11 June 1994 and available on the Internet (http://bmj.com/cgi/content/full/308/6943/1537).

This paper analyses data on 1040 patients presenting to the Accident and Emergency department at Addenbrooke’s in a single year (1992) with cycle-related injuries, of whom 114 had worn cycle helmets when the accident occurred. It confirmed the protective effect of helmet wearing for Cambridge cyclists and is obviously far more relevant than data from elsewhere, where conditions are different, for discussion of whether Cambridge cyclists would be sensible to choose to wear helmets.

Oi! Cambridge! No! In Newsletter 43 you say ‘There will shortly be a pilot project in Sheffield, a city better known for steel than for cycling, identifying some of the issues in the new role.’ Actually Sheffield does have a bit of a reputation as a cycling city. Apart from a number of well-known cycling clubs, the area has spawned several world-famous racing cyclists such as Malcolm Elliott, Adrian Timmis, David Baker and Simeon Hempsall.

We have to put up with enough prejudice of the ‘Oh, Sheffield’s too hilly for cycling’ variety without you lot joining in! Seriously the topography of the city is not necessarily a major factor in suppressing cycling – studies done both by ourselves and by the University of Sheffield suggest that road safety is a far greater concern. This is hardly surprising in the context of a city where 56 children are killed or seriously injured on the roads each year. Many residents of Sheffield, who cycle out to the Peak District at the weekend to tackle some fairly serious hills, balk at the idea of cycling to work in peak-hour commuter traffic.

And what do think those frames of yours are made of anyway?