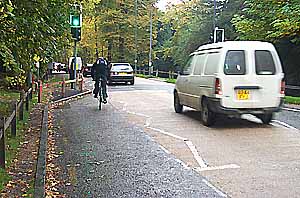 Newsletter 38 reported that yet another buildout was proposed for Queen’s Road, at a new pelican near Clare College. This has now been installed, and is as hazardous to cyclists as we feared, especially at those times when there are few parked cars. When this crossing was first announced, we wrote to the County Council supporting the crossing but opposing the buildout. In a disgraceful abuse of authority, County Council officers decided that because we had not formally objected to the crossing itself our letter did not constitute an objection and so would be disregarded. Apparently if we had objected to the crossing the Council would have been legally obliged to consider our views.