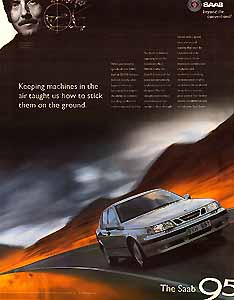 Saab, Volvo and BMW are all running adverts at the moment showing their cars against a blurred background, giving the impression of speed. ‘Simple statistics will tell you that the new BMW M Coupe is a car built for circuits that are a lot more testing than the M25.’ ‘[The Saab 95] slices through the air with a speed, ease, silence and stability that must be experienced to be understood.’ The culture of cars is one of speed.

But speed kills. And speed intimidates. Country lanes, once quiet and still narrow, see huge volumes of commuter and leisure traffic they weren’t designed to take, travelling at speeds which put off most cyclists. In urban areas speed not only causes collisions: it also puts people off crossing the road or cycling along it. On motorways, traffic cruising at 90 mph uses fuel far faster than, say, at 55 mph, contributing to global warming and pollution, and making rail journeys unattractive in comparison (even though the law is broken to do it). 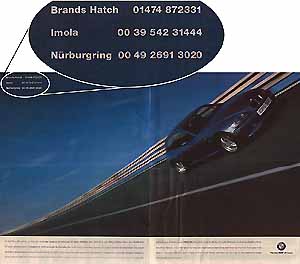 Those are just a few of the reasons why it is sensible to reduce traffic speeds. More than anything, though, speed reflects a culture of impatience and frustration, one that many of us don’t want to be involved with. Motor traffic has effectively taken our roads away from us. Changing attitudes to speed means changing driving culture. Such a change in culture would in turn make cycling a more attractive proposition.

We included a leaflet from the Slower Speeds Initiative with Newsletter 17. This is a coalition of national campaign groups: the Children’s Play Council, CTC (Cyclists’ Touring Club), Environmental Transport Association, Pedestrians’ Association, Pedestrian Policy Group, RoadPeace, Road Danger Reduction Forum, Sustrans and Transport 2000. In November, we invited Don Mathew, who chairs the Slower Speeds Initiative, to speak at our general meeting with a view to campaigning on this issue locally.

The Slower Speeds Initiative wants to see many of the same kinds of thing we do:

There has been an early success. The Government has announced a national review of speed policy. This is not just about speed limits, but the whole way traffic speeds are handled.

However, his words were tempered by suggestions that the economy might be harmed by lower limits: ‘The effects of speed are highly complex and felt beyond the vital area of road safety. To create a comprehensive and successful speed policy we need to see how it affects the economy, how much it will reduce vehicle emissions and improve people’s quality of life. Only by taking account of all these elements will effective speed management help develop a successful integrated transport system.’

The review of speed policy will be a three-stage project, with the first phase exploring existing research on traffic speed and its effect. Phase two will involve the Department consulting people and organisations who can make a valuable contribution to the subject. The final stage will be to draw conclusions and prepare a report, which will take about a year.

One sore point of recent years is the very limited use of speed cameras. The problem is that the money they raise in fines does not get recycled into the running costs and installation of new cameras. Therefore they can’t be as widely used as they might be. The money must come from local authority funds. Many organisations (including the police and the Campaign) have made representations about this, but with no success so far.

Speed cameras are demonstrably successful. When they were installed on Newmarket Road there was a reduction of around a third in the number of accidents. Up-to-the-minute figures show that on Huntingdon Road speeding offences have more than halved and collisions and their severity have been cut enormously. On the A603 at Harlton, the (high) speed limit is now being obeyed where it was clearly being widely ignored before.

Sergeant Gerry Howard of Cambridgeshire Constabulary’s Enforcement Unit says: ‘All the evidence indicates that where cameras are installed, they are an effective deterrent to speeding motorists. These figures show a dramatic decrease both in the number of speeding offences and of accidents, so it is obvious that the cameras are working.’

As well as saving lives and reducing pollution, combating speeding is also about restoring freedoms: the ability to enjoy the domestic street environment, to walk and talk in safety, and not to feel intimidated by the speed of others when driving. Noise and health also come into the equation.

Cambridge has only one 20 mph zone, in Romsey. This is managed with rather severe traffic calming – which is also uncomfortable for cyclists and limits which streets we can use (although St Philip’s Road was at least made two-way for bikes). The awkwardness of the speed humps (see Newsletter 18) means that the scheme has less than universal support in the area. Yet in England and Wales at present, this is the only way to establish slower speed zones. We think it should be possible to establish 20 mph areas as standard, without necessarily using all this hardware. Some of the lesser through roads (Mill Road is an obvious example) would benefit enormously too. Home Zones – slower speed areas based on the Dutch concept of Woonerf, where the carriageway is no longer the central feature of a street and where responsibilities of road users can be reversed – are not completely possible yet in this country, but should be.

Even without this, we have seen that much more could be done in Cambridge. On our recent visit to York, for example, we saw many more examples of widely traffic-calmed areas, using the more cycle-friendly speed-cushions (which leave gaps for bikes to get through).

While there are many areas we could work on, three areas for particular focus were brought up at the November meeting. All have to do with challenging the culture of speed.

We will also, no doubt, be making representations about future traffic calming. While more 20 mph zones are probable, with our support, ultimately perhaps we should be aiming at a City-wide speed limit of 20 mph.