This was a very lively and thumping exhibition, totally dominated by Mountain Biking, BMX and some racing bikes. The style of selling was full on, loud and very sporty. I was alarmed to see some front forks suspended in hangman’s nooses.

I was looking for cycling alternatives, and it was a bit disappointing from this point of view. Bike Culture was there with a collection of members’ bikes, some recumbent, including a front-wheel-drive Flexo and a penny-farthing on sale for a bag of sand (whoops – sorry that’s MTB talk), I mean £1000. They even had some trailers, but they weren’t selling them, they were just there as curiosities. 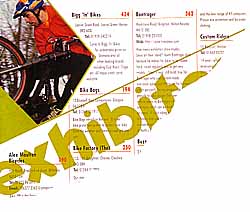 I had a go on the sports and fitness stand, completing 1 km in 85.6 seconds, that’s 26.3 mph, and I had an average power output of 426W, I think. That was with a 14 speed Rohloff hub gear system, which seems to work really well. After that my legs were complaining. The Alex Moulton stand had some shiny chrome plated suspension bikes which were a dream to sit on. What a shame there was nowhere to try riding them at the exhibition. (Apparently there was a place that some bikes could be ridden, but there was a long queue.) I told the salesman that his bikes looked ‘highly nickable’, but apparently they’re not because it’s difficult to unload them, whereas it’s easy to sell an MTB on.

Reise und Müller had some lovely suspended folding bikes, and more soberly some practical commuter bikes with 7-speed hubs sold complete with dynamo, lights and rack. There were some electric bikes too, but the ones I saw were so heavy that you wouldn’t want to pedal them. Some of the electric bikes don’t require a helmet, but one bike I saw was assisted by a 49 cc engine and required tax, MOT and registration plate. It was quite light, and apparently would chug along happily at 25 mph. I wanted to buy a Go-Ped – a folding motorised scooter – which looked so much fun that, yes, it is banned from the streets.

On the trailer front, there was only one guy selling them. His was a very smart and strong foldable metal box that weighed 33 lb but could carry 10 times that. It really looked like a gardening accessory that could be attached to a bike, and was pricey at £350 (show special). Its only attachment was to the saddle, and left me worried that a device that could carry three bags of cement could easily throw you into the middle of the road.

I saw only one stand selling cycle parking lockers. Bright plastic interlocking units, each capable of taking one bike, and going for around £400 each, mostly sold to local authorities and supermarkets so far.

I came out laden with several kilos of re-cyclable blurb, including four magazines and many catalogues. The show was at the NEC, 17-19 April 1998. It’s easy to get there by train, but, if you want to go next year, take your own food as it’s very expensive there. My sister (who is an off-road MTB rider), summed up the show as ‘£8.50 to get into a bike shop!’